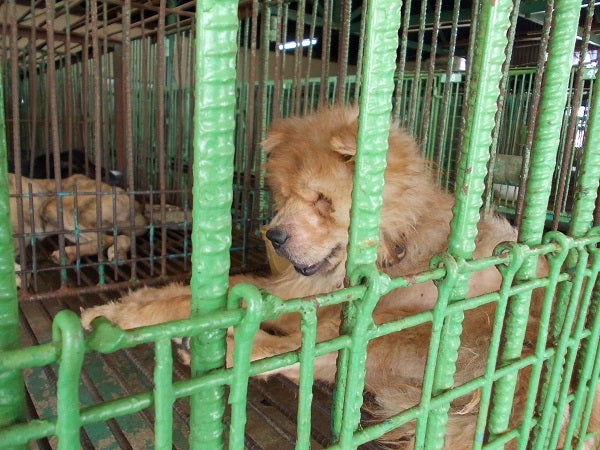 At 78, Virginia Romero has seen quite a few battles in life, but her latest still rekindles the passion of her younger years.

“Ako na lang ang ikulong nila (They might as well put me behind bars),” she says defiantly of Ordinance No. 13, S-97, that “bans the (ownership) of animals in settlement or resettlement areas.”  The law was passed in 1997 by the City Council of Marikina City.

Romero, who has been living in the city’s resettlement area since 1994, had to surrender one of her dogs recently when it bit a neighbor who lives just a few meters away.  But the elderly laundrywoman still keeps three dogs and a couple of cats in the 24-square-meter house that she shares with a son.

Nobody can take the remaining animals from her, she vows in a virtual declaration of war on the city government, a sentiment shared by her other pet-owning neighbors.

According to officials implementing the ordinance, keeping pets in a small cramped space where relocated residents live would be unhealthy.  The residents were informal settlers living on the banks of the Marikina River who were resettled by then Marikina mayor Bayani Fernando in pocket-sized houses just big enough for a toilet and bath.

Complaints about the law have reached the City Veterinarian’s Office (CVO), says city vet Dr. Manuel “Bobot” Carlos.  Similar complaints about seized animals that pet owners are no longer allowed to retrieve have also flooded the office of the Philippine Animal Welfare Society (PAWS), he adds.

In several TV interviews, PAWS has described the ban on owning pets among the resettled residents as “anti-poor.” In a letter to councilor Susana Magtubo, chair of the Committee on Health Sanitation, the group suggested changes on the existing ordinance, among them allowing people in resettlement areas to own pets as long as the animals are kept within their homes or yards at all times.  The group also asked that the same policies in other parts of Marikina be implemented in resettlement areas, such as the registration and vaccination of dogs.

Anna Cabrera, executive director of PAWS, also takes issue about the city council’s definition of a healthy pet environment:  “Space is not the sole basis of what is healthy for humans and animals,” she says.  “It is a matter of good hygiene, or keeping a pet and its surroundings clean, that determines whether an environment will be healthy or not. The Marikina ordinance generalizes that ‘all animals’ are ‘dirty’ and ‘sources of disease.’”

Carlos, who has served as consultant to the city’s animal health office since 2001, says he is just enforcing the law.   The city, he says, cannot allow the adoption of animals seized on the streets or surrendered to the city pound because “people in the resettlement areas know that they cannot own animals.”

Despite the law, they still keep animals in their tiny homes.  “Our people do the rounds almost every day, so they know.”  While some residents keep the animals outside their homes, Carlos says his office “only captures animals on the street.”

Cabrera disputes that. “We’ve had three or four reports of Animal Population Control Office (APCO) personnel trying to get animals from inside houses. Majority, of course, are reports about APCO personnel visiting houses in resettlement areas week after week and leaving threatening notices that they would be charged with criminal cases unless they transfer their pets. This is a form of harassment.  It causes mental anguish when you force a pet owner to think of ways to ‘transfer’ one’s pet in a matter of days. Remember that for many people, their pets are members of the family.”

The PAWS official says that dozens of pet owners have sought help from them regarding the threats of criminal charges, as well as being asked to pay a certain amount so that the charges would be “dropped” and they would be given “more time” to transfer their pets.

But the city vet explains that Ordinance No. 13 was passed to promote responsible pet ownership which he defines as being able to provide sufficient food and water to animals. But some residents in resettlement areas can barely scrape up a living, he says, so “how can they care for these animals properly?”

A visit to Marikina’s resettlement area seems to confirm his observation.  On a hot afternoon with temperatures ranging from 34 to 35 degrees Celsius, our team saw a dog tied outside a house, with no shade nor food and water.

But PAWS says that not everyone in urban poor areas is incapable of taking care of pets.  The group, which strongly advocates pet adoption, strongly opposes the CVO’s decision not to give up for adoption seized animals from depressed areas.  Every animal, PAWS campaigns have reiterated, deserves a second chance and a loving family, especially since dogs and cats are known to be good companion animals. They are classified as domestic animals that can live harmoniously with humans.

“Neglect or cruelty is not the monopoly of people in resettlement areas,” Cabrera explains. “We’ve seen many poor people who are responsible pet owners. Regardless of social strata, people must not be deprived of their right to own pets if they can care for them properly.”

In fact, she adds, PAWS policy on adoption does not dwell so much on space when the group conducts an ocular inspection of the houses of adoption applicants.  “Many people have smaller living spaces now compared to decades ago but good pet owners, even those living in spaces of 24 sqm, can still own a dog or cat responsibly.”

In fact, the Marikina City Impounding Area presents a heartbreaking sight. Dogs and cats are caged regardless of their size and condition.  A dog and her pup who have mange share miserable space in a small cage.  Other dogs are skin and bones, while others are apparently sick.  The animals’ eyes say it all:  they know they’re doomed.  Instead of being the playful creatures they are, dogs here are lethargic and severely restricted in their movement.  Some of them will eventually be put down using the “most humane method” of lethal injection.

Carlos says giving the animals up for adoption would mean tolerating pet ownership among residents whose irresponsible behavior led to their pets being impounded in the first place.  Most of them come to the city pound or send relatives or friends over to retrieve the animal they lost.

“I became suspicious when someone came to adopt an animal,” recounts the city vet. “Upon entering the impounding area, he went straight to where the dogs and cats from resettlement areas are kept and pointed to one particular dog. He insisted that he wanted that dog without even looking around for others.”

The CVO staff says they’ve found out that some prospective adopters were relatives or friends of those living in resettlement areas, but would give fictitious addresses as far as Bulacan.

“But why not adopt dogs from there?” Carlos asks. “My staff would later see the same adopted dog in the resettlement area.”

Resettled residents have also complained about the alleged mishandling of animals by the CVO staff, saying that they are aggressive when seizing the dogs.

But Carlos says this is only an impression. “Any creature, even humans, (who are) surprised and forcibly seized will definitely struggle.”

Meanwhile, Renante Reyes, chief operations officer of CVO, says their office only get animals that were “voluntarily surrendered.”

Despite the uproar that the active implementation of the ordinance has raised, the Marikina City Council through its secretary Noralyn Tingcungco, declined PAWS’ request to amend Ordinance No. 13 at this time.

The Committee on Animal Welfare (CAW) through its new chair Dr. Arwin Serrano says that the city veterinary’s office will continue to implement the ordinance which, he explains, is aligned with Republic Act 8485 and RA 9482, also known as the Anti-Rabies Act of 2007.  Both RAs promote responsible pet ownership, which is defined as being able to provide decent shelter, sufficient food and necessary vaccinations for pets.

Serrano says that CAW, an agency under the Bureau of Animal Industry of the Department of Agriculture, is willing to be an arbiter between PAWS and the Marikina vet office, to resolve the issue, or as resource person should a court case ensue. But until then, the law has to be enforced for the good of both humans and animals, the CAW chair adds.

But Cabrera remains unconvinced of the city’s good intention in banning pet ownership among residents of resettlement areas.  “It simply shows that Marikina does not want to exert the effort in implementing the Anti-Rabies Law by punishing only irresponsible pet owners. They want the easy way out by banning pet ownership altogether.”

She also decries the anti-poor character of the ban.  “If it is not anti-poor, Marikina should enforce the same law on all residents of Marikina, regardless of where they live. They know they cannot do this because the people who live in non-resettlement areas have the financial capability to ’fight’ them (in court). Even the National Anti-Rabies Law does not single out space requirements in owning pets.”

The law, Cabrera says, is like “killing a fly with a sledgehammer. And not allowing confiscated resettlement area dogs to be adopted makes this the cruelest ordinance ever. Every pound dog deserves the chance to be adopted.”

As for “responsible pet ownership,” Cabrera notes:  “Neglect or cruelty is not the monopoly of people in resettlement areas. (Rich) people may be as equally guilty in neglecting their pets.”

She adds:  “Not being allowed to own companion animals responsbily just because you live in a resettlement area violates human rights.  The right to own property is one of our basic rights in a democratic society.” •