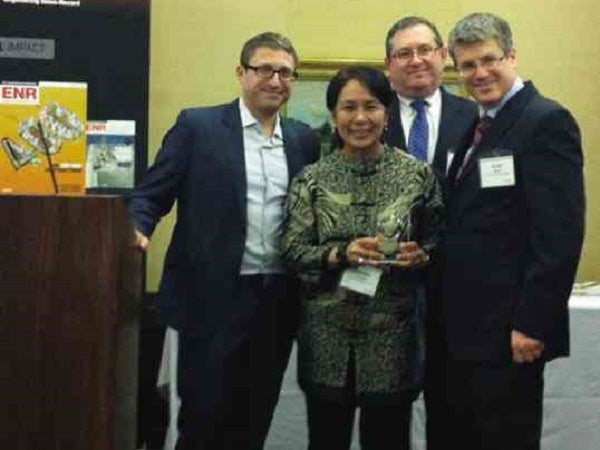 A leading US industry publication selected the Zuellig Building in Makati as the winner of the Green Project category of its 2013 Global Best Projects competition.

Engineering News-Record holds the competition that honors construction and design excellence across the globe.

The Zuellig Building is one of the 66 projects that vied in one of 20 different categories—from airports, bridges, roads and highways, to retail developments, healthcare centers and office buildings.

Among the 21 winning projects, which include 11 Best Projects and 10 Awards of Merit, are The Shard in London (Best Retail/Mixed-Use Development); The China Central Television Headquarters in Beijing (Best Office); BC Place Revitalization in Vancouver (Best Sports/Entertainment); and the National September 11th Memorial in New York (Award of Merit in the cultural category).

The 2013 Global Best Projects winners were chosen by an independent, seven-member jury of industry professionals with extensive global experience. The criteria included safety, innovation, contribution to the global community, aesthetic quality and workmanship, with special emphasis on the project team’s global diversity.

The 33-story Zuellig Building is at the corner of Paseo de Roxas and Makati Avenue in the Makati Central Business District. It is a collaboration of world-class engineers, architects and project consultants, including its developer Bridgebury Realty Corp., a subsidiary of the Zuellig Group.

Engineering News-Record (ENR) is a weekly magazine with an international audience of contractors, project owners, engineers, architects, government regulators and industry suppliers. The publication is considered by many industry insiders as the bible of news and information on property and construction.

The Zuellig Building was acknowledged at an awards dinner in New York on June 6 during the ENR 2013 Global Construction Summit. The building will be featured in the June edition of ENR.

The Zuellig Building was also the recipient of the 2012 “People’s Choice” Award in the international property conference Mipim Asia in Hong Kong. The project also won an award in Mipim’s “Best Office and Business Development” category.

In April 2012, the Zuellig Building was granted the Father Neri Satur Award for Environmental Heroism in recognition of the project’s contribution toward “reducing carbon footprints through green building and energy conservation in the business sector.”