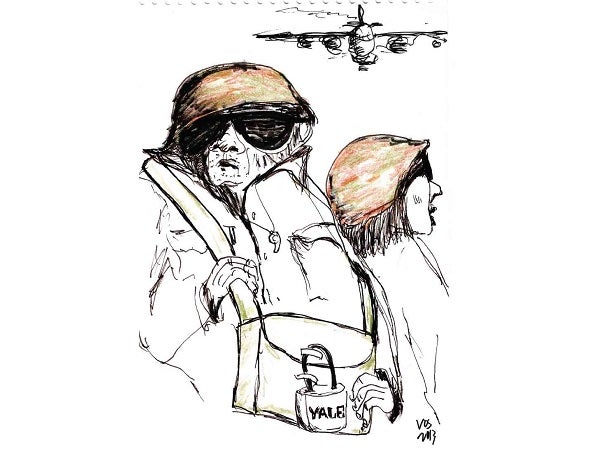 The new risks of travel

It isn’t fair! Now that we have certainly the time and somehow the resources, traveling to Europe has become risky business. Simply being senior is risky enough as it is, but venture out yet, and not just anywhere, but out in the streets of Barcelona or Madrid or Paris where, not abnormally, tourists are dispossessed!

“You don’t feel a thing,” victims say, alluding of course not to their own loss, but rather to the adroitness of the pickpockets.

It used to be that the most difficult part of preparing for travel was securing a visa; now it’s the easy part. The effects of the long haul on our old bodies are a concern, but we’ve found ways of somehow alleviating them. But how do you deal with your fear of pickpockets and purse snatchers, not to mention the loss and trauma they cause you?

Credit cards used to provide some sense of security. If you lost them, you simply report the loss, and its automatic invalidation frustrates future purchases. But too many experiences shared by travelers of plastic money being rejected at hotels, airlines, and restaurants cause another type of insecurity. One is therefore forced to bring as much cash as allowed.

If the required travel insurance for those of us aged over 70, which covers the expense of coming home in a box, does not discourage them enough, a whole new set of defensive provisions for travel just might.

Almost as indispensable as a helmet for war are slashproof handbags. Those I’ve seen in Landmark are Australian-made, in sizes and designs suited for either men or women—for “smart-safe” travel, the promotional stand says. Some come, indeed, in colors of war—khaki and fatigue.

The main defensive device is laid inside the lining—an invisible wire mesh, so that, in case the first layer of the bag, sturdy enough as it is, is unable to stop a blade, the wire net should. The bag hangs from a blade-resistant, wire-edged strap. It zips open or close with a safety lock.

Pockets no longer serve their purpose; even the unseen breast pockets under jackets are not safe.

Some privacy may even have to be conceded. Special underwear, very likely inspired by the Australian kangaroo, have been devised. Sewn into them are zippered pockets for cash and travel papers.

A cousin is relieved the undies come in high-rise styles, reaching up to the waistline, there more or less safe from rolling off. Still, they’re definitely not fetching, especially in our sizes. In the eyes and words of my cousin’s grandchildren, they look, once packed, like “pillowcases!”

A traveling family of four think they had taken every precaution when they board a train and occupy a private berth for all of them. On their very first night they are gassed unconscious and stripped of jewelry and all the cash hidden in their private pockets.

If you think traveling in a group provides safety in numbers, thieves, in fact, see a wholesale opportunity. After a tour of the city, the bussed tourists make a shopping stop at Louis Vuitton in Paris and deposit their purchases and belongings in the bus. In an uncommon humanitarian gesture that is to prove tragic, they take their driver along for lunch. When they come back the whole bus is gone. When recovered, it has been, of course, emptied of all Louis Vuittons and everything else.

Some don’t even get that far. At the airport, Enrique, a third-generation Spanish descendant who has gone through the rigors of naturalization, has just landed in his new country when someone in a rush brushes past him.

“Perdone,” he hears himself say in dated Spanish. When he gets to the booth to exchange dollars to euros, his hand slips clean through his slashed and emptied back pocket.

Two couples traveling together are lining up for tickets for a train from Madrid to Barcelona when suddenly they hear the tinkle of fallen coins, some rolling at their feet. In the split second of distraction, one of them loses the wallet, picked off his very hand, and the other man loses his in the more normal way—his has been slashed.

One snatcher, apparently an amateur, is not so lucky. His intended victim, a journalist, senses him before he can accomplish his job. In the scuffle, the intended victim manages to snatch the snatcher’s own bag, presumably containing stuff more valuable than the expected loot. An exchange is agreed: wallet for bag.

On my last trip to Europe— Barcelona, Madrid, Paris—in 2010, nothing untoward befell us four women. And returning to the United States from Madrid, where they had watched Rafael Nadal win the Open, my brother-in-law and his wife had themselves no horror stories to tell, notwithstanding the rise of Spanish unemployed to around 27 percent; nor did they travel suited for protection.

Anyway, my husband Vergel and I are inclined to push our luck a little. Not having seen Europe together and given our age, we think the risk is worth taking.