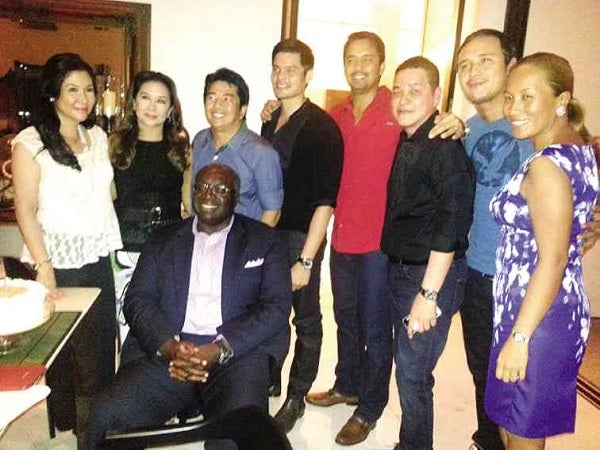 Over dinner last week, we finally got the full story on how Rajo Laurel and friends got to hook up with Sarah Jessica Parker when the style icon visited Manila a month ago for the SM Aura Premier opening and to do the SM Love to Shop campaign.

While this is already Pinoy style trivia history, a few people—the bashers and cynics (that’s us)—still wonder if it was indeed true that Rajo was with SJP as his tweets and Facebook showed (but never narrated).

Rajo and friends sat it out at the lobby of Peninsula Manila, where SJP was billeted. This was the night of SJP’s first day here, after she was done with her whole-day shoot of her SM campaign. When Rajo saw SJP near the lobby, he just walked up to her, trembling and painfully embarrassed. But typically Rajo, he introduced himself nonetheless as a fashion designer and gushed how he’s been a lifelong fan of the “Sex and the City” star.

To Rajo’s surprise, SJP was open to small talk. A bigger surprise still—SJP told Rajo, “So show me your city.”

Incredulous, Rajo said they could have lunch the next day at Dampa at MOA to let her experience our fresh catch, the ritual of going to market to pick out the fresh seafood, and to watch it being cooked.

SJP agreed. A frantic Rajo called his close friend, veteran restaurateur and foodie Malu Gamboa (El Cirkulo, Tsukiji, Azuthai) to come to the rescue and think up what could be the best Pinoy dishes they could have at Dampa, although, in fact, Rajo wasn’t sure if SJP would indeed show up.

Malu worked the Net to come up with a menu which a New Yorker like SJP could possibly like. To Rajo’s surprise, SJP did show up at Dampa right before noon the next day, with only her agent and security aide.

Malu served up orders of a wide gamut of Pinoy comfort food, from barbecue to inihaw na liempo to bagoong. And—this would surprise stylistas—SJP ate the food served her; apparently, she’s no anti-food stylista. Someone at their table noted how SJP has a New Yorker’s free spirit; she’s game to try anything.

From Dampa, the group brought SJP, who still wanted to see the city, even if in capsule form, to Albert Avellana’s gallery/home in Pasay City. This compound in the heart of the city is actually a culture/design enclave, for it is there where designer-friends (Jojie Lloren) and culturati (Avellana, Ino Manalo) have their houses.

SJP enjoyed her time there, and loved the stuff she saw, especially the furniture. She would have wanted to bring home a wooden table she liked but that would be a logistical toil.

Later in the day, after her official functions, she was intrigued by our halo-halo, so later that night, Malu served an instant Pinoy late-night merienda with halo-halo at El Cirkulo.

Asked how the global style icon was up close, someone in Rajo’s group said, “She’s really so nice and grounded, nicer than you and me.”

To us in media, however, the SJP visit was indicative of another matter. It showed how a monolith like SM knew when to use mainstream media and when to use social media, and how to use both. This is significant at a time when big business and brands—big and small—are in a scamper to mine social media.

They use it to generate the buzz, and Facebook/Twitter/Instagram do generate the buzz. But, unfortunately, oftentimes the message that a brand wants to convey is either lost or distorted in the noise and clutter of social media. And some businesses or brands find this out too late, when they have to spend some more to clarify or reinforce the message or information they wanted to convey in the first place.

In the SJP visit, it was obvious that SM was in control from the outset. It was able to keep the secrecy of her forthcoming visit, even if the air was thick with speculations. An SM insider, who worked on the visit, said not even her staff knew who the visiting celeb was even as they were busy with the preparations.

The one-on-one interviews with SJP were limited to mainstream media (TV and broadsheets). It was the subsequent press conference that was open to all media, from mainstream to bloggers to online site; but even then, SM chose which bloggers to invite.

With such a strategy, SM paid careful attention to information dissemination—the message it sought to convey by signing up a high-ticket endorser like SJP (multimillion-peso deal, to be sure)—and not only to creating hype. The message is the love of shopping in SM’s style-upgraded stores, and who else could typify this but Carrie Bradshaw?

“We went for media credibility,” an SM insider said, on why the conglomerate prioritized mainstream media. It didn’t want the free-for-all social media landscape.

But SM knew when to let social media come in. Facebook, Twitter, Instagram, blogging and online sites were useful tools to build the hype, to increase the buzz—but, for now at least, are not an ultimate source of information.

Mainstream media and social media don’t cancel out each other. It’s not a case of either/or; one has to use both—in calibrated levels.

SM’s management of social media is a model of how big business can harness social media, and not the other way around. It shouldn’t be in a mindless, almost-in-a-panic mode.

This is a lesson especially for big consumer firms that jumped on the social media bandwagon early, then found themselves spreading still undefined images and words. In the end, the consumers—the market of their brands—remain unenlightened, if not uninformed, about the value of the brand. All that is etched on the consumers’ minds are the made-up faces of the young endorsers, not the value proposition of the brand.

Is that wrong? In a way, yes, because the consumer market is drawn only to the celebrities, or becomes familiar only with the faces of the brand executives, but doesn’t develop loyalty to the brand. This is because a brand campaign begins and ends with social-media hype.

While SM proved successful in handling mainstream and social media, there’s still an unresolved issue that’s rather, uh, primitive. Access road. How do you get to SM Aura without having to go around and around? Now, what to do…

It was a fun birthday dinner retail king and style icon Ben Chan hosted for US Ambassador Harry Thomas, who’s winding up his term in the Philippines after more than three years.

Ben turned his stylish minimalist home into a dinner and after-dinner party place, with singing and dancing. So fashion designer Auggie Cordero was right when he told me years ago that Ben has good taste and a good eye for style.

This was evident to Auggie, Joe Salazar and other designers even as early as the late ’70s, when Ben worked with fashion designers in their runway shows. (His family owned Chan C. Bros., which supplied the runway and other fashion-show paraphernalia. He also lived in the US for a time.)

Our favorite spot in his home is his den/library, with its blend of wood and glass, and of textures (the sheen of the stainless steel frames of the chairs against the matte surface of wood, for instance, and the softness of leather).

When we asked him what he would miss most about the Philippines, the ambassador pointed at Ben and said, “The people, of course.”

Thomas will teach in an Arizona university.

Ben had a select mix of guests from fashion, beauty to show biz celebs. Willie Revillame came early and preferred to stay in the garden. But later he not only joined the guests, he even became the attraction as he played the drums.

Like many others, I’m saddened by the passing of Meckoy Quiogue—our former colleague/boss at ABS-CBN’s Studio 23/magazines, a stalwart in the advertising, broadcasting and creative industries.

In a world where good men don’t always come first, he remained a good man.

He supported our magazines when I was still with ABS-CBN Publishing. I remember him going out of his way (literally) to attend our Christmas party at the Meralco tennis courts (that far), and cheering us on in our projects.

He knew how to bring out the best in his young staff. A nurturer. Rica Alfonso Dalmacion and Edge Pamute must be missing him.

Meckoy could also play a mean tennis and dance a mean swing—at our annual corporate planning sessions. (When I fell to the ground while doing the swing—tipsy, with another partner—he so quickly hoisted me back to my feet. Good thing he was just beside us. Can never forget that fun—with my hurt behind—planning session in Baguio.)

I’m glad somehow that he allowed us to interview him when he was a GMA executive.