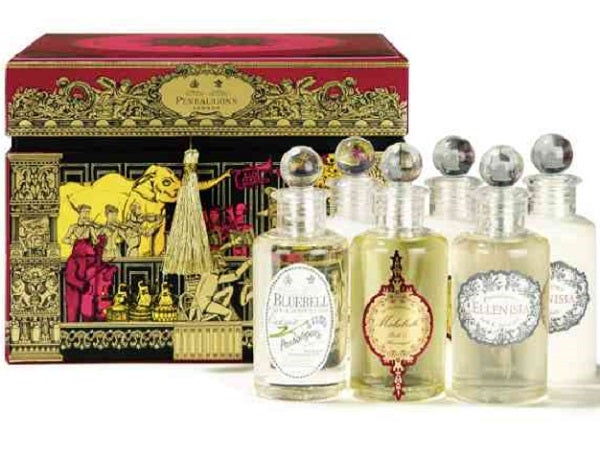 Someone once said that luxury consists of simple joys that allow you to escape your day-to-day life, like smelling a beautiful scent upon entering your bedroom after a hard day’s work.

For over 140 years now, Penhaligon’s has created innovative perfumes that challenge the traditions of this art, producing scents with unlikely inspirations—from Saville Row to a candle that smells of a gentleman’s club.

Today, the legacy of its unconventional founder William Penhaligon lives as the brand strives to create highly original scents. Ingredients are made in England and are undeniably rare, like hand-squeezed bergamot and jasmine at twice the price of gold.

Adding to its exquisite appeal is the signature clear-glass bottle adorned with a dainty, ribbon-wrapped stopper and an intricately designed box that differs with every Penhaligon’s fragrance. For instance, a delicate-looking bottle tinted in gold reflects the brand’s Artemisia Eau de Parfum, a sweet and caramel soft scent with a touch of amber and a hint of musk.

Named in honor of female Renaissance painter and feminist icon Artemisia Gentileschi, the floral and fruity scent contains green apples and nectarines washed with jasmine tea and sprinkled with violet, cyclamen and lily petals. Adding to its ladylike and mysterious fragrance are honeyed vanilla and warm spices.

Another sultry scent is the Endymion (in Greek mythology, said to be variously a handsome shepherd, a king or a hunter), which is the aromatic partner to Artemisia Eau de Parfum. Created in 2003, Endymion is a fragrance of contrasts, a modern fusion of citrus, spices and leather.

It combines light and dark, and sweet and sharp tones: with head notes of bergamot, mandarin, sage, and lavender; heart notes of geranium and dark coffee; and base notes of pine, musk and black pepper.

For a sleek scent, Penhaligon’s Douro Eau de Portugal does the trick. Created for Percy Croft of the Croft Port Dynasty in 1911, it’s described as the equivalent of a Savile Row suit with the sharpness of its green lime and bergamot, blended with geranium and lily, and topped off with musk and sandalwood.

Producing another striking sensual experience is the Malabah, which was inspired by an imaginary journey along the East Indian spice route. Opening notes of citrus, green coriander, and smoky earl grey tea blend beautifully with rose, ginger, and aromatic spices and the subtle aromas of orris, sweet musks, and amber.

Reflecting its eccentric past, the new Penhaligon’s counter at Adora Manila is a play on textures and finishes with a bespoke, bow-shaped door and bow-shaped fragrance-profiling table.

Penhaligon—who first worked as a barber at Hammam Baths on Jermyn Street in London—took over a perfume shop in the late 1860s and soon transformed the business into an upscale salon.

When Mr. Jeavons, foreman of the hairdressers, became a partner in 1880, the house was renamed Penhaligon and Jeavons.

Penhaligon was also appointed Barber and Perfumer to the Royal Court in 1903, with the Royal Warrant granted by Queen Alexandra.

The fragrance brand has two Royal Warrants: from The Duke of Edinburgh, granted in 1956; and from The Prince of Wales granted in 1988.

By 1902, when its founder passed away, Penhaligon and Jeavons had become a supplier to every European Court. In 1904, the brand became known solely as Penhaligon’s.

In 1907, Penhaligon’s began shipping its goods overseas. Today, it’s found in Japan, Russia, and Ukraine, among others.

The brand’s master perfumers such as Bertrand Duchaufour, Olivia Giacobetti and Olivier Cresp have created over 30 distinctive fragrances like Soliflores, Orientals and Chypres.