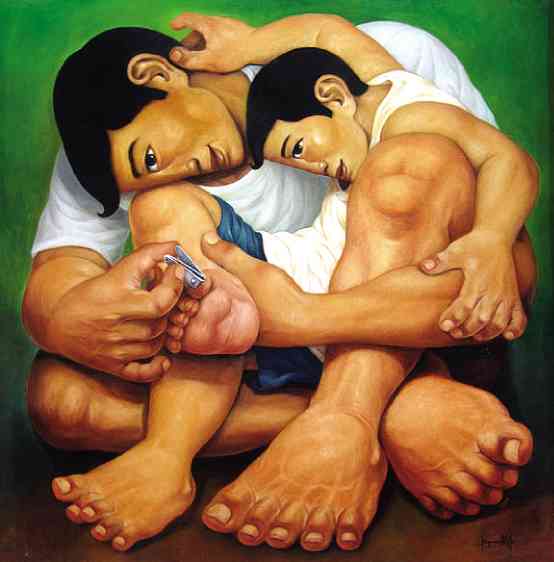 Galerie Joaquin will open today a new exhibition that commemorates fathers all over the world. “Respect and Affection: Celebrating Father’s Day” features works from some of the finest visual artists in the country today, such as painter Dominic Rubio, and sculptors Ramon Orlina and Michael Cacnio.

Rubio showcases his nostalgic scenes of Old Manila, framing them within the context of fatherhood. He shows a wonderfully executed artwork that depicts a father and his small son promenading at an old city plaza. Horse-drawn calesa scurrying around them, the figures are done in Rubio’s characteristic style of elongated necks and fine clothing detail. Michael Cacnio, the celebrated sculptor whose works are included in many significant international art collections, has actually built a large part of his distinguished career on genre scenes that involve father and sons at play.

His sculpture depicts a son flying a kite while riding on the shoulders of his running father. Rendered in a distinctive “mid-action” pose, the sculpture is characteristic of Cacnio.

Vista’s “Hinuko” is a a fantastic example of the artist’s use of compact figurations framed against a genre background—in this case, that of a father and his son huddled together after a bountiful harvest.

Abes continues his exploration of primitive art.  His “Piggyback Ride” is testament to the remarkable bond between father and son.

Cagandahan’s light-heartedness is embodied in the distinctive sculptures of fathers and their children on top lanky carabaos.