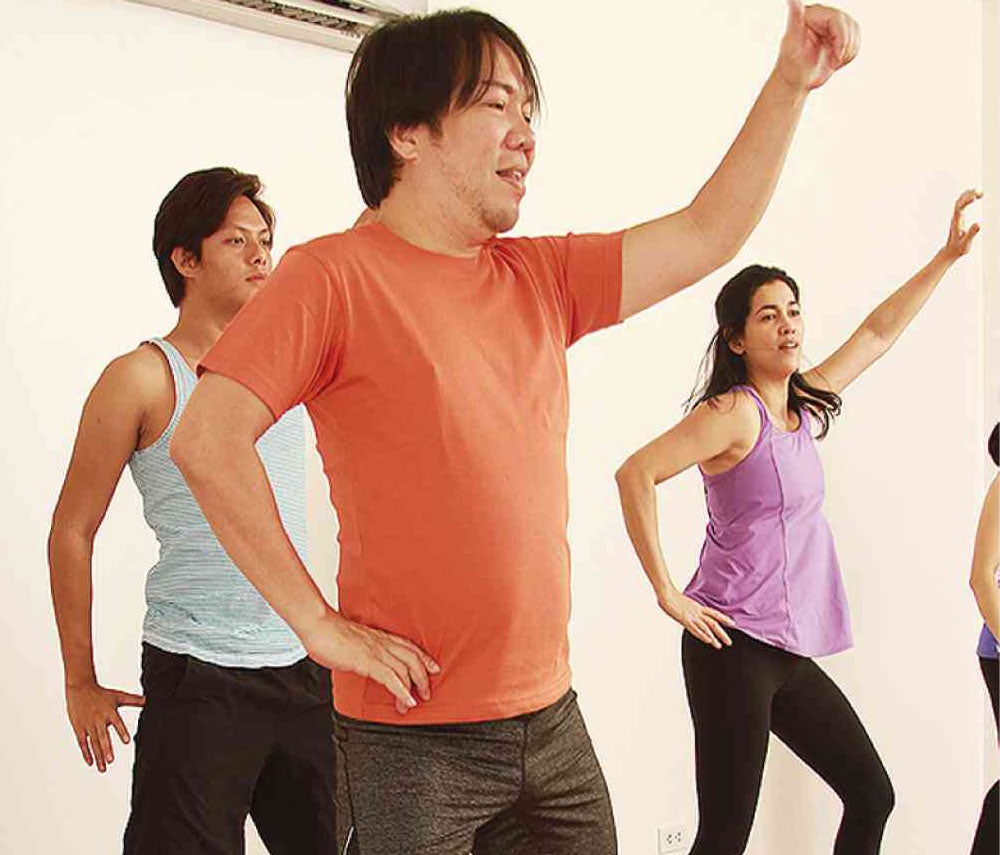 Zumba, the dance-cum-cardio workout, is all about having fun while burning 300 to 800 calories an hour. Hence the slogans “Party yourself into shape” and “Ditch the workout, join the party.”

“It’s not competitive, it’s a party,” says instructor Paul Perez. “You can lose 10 pounds in one month as long as you don’t increase your calories. Usually you tend to eat a lot after a workout. Just maintain your portions.”

Perez is one of the favorite instructors of the social set because of his sweat-soaked sessions. His classes are fast-paced and can be quite strenuous. Nobody in his class leaves without being drenched in perspiration and a bit out of breath. There’s a lot of jumping, side-to-side movements, rotary arm movements, undulations of the torsos and rotating hips.

Zumba attracts people who have been sedentary all day and need to loosen up tight muscles, or fitness buffs who want an interesting alternative to the repetition of cycling, running and swimming.

One of Manila’s most fashionable entrepreneurs, Kaye Tiñga,  admits that fitness is her biggest indulgence. She has individualized lessons in Stott Pilates and Core Kinesis. With friends, she enjoys taking private classes in Zumba.

“This is my only form of aerobics. The other workouts are stationary. I used to do badminton, but I stopped after an injury. Zumba is more intense. I love it. It’s easy to get bored. With Zumba, every class is different. Sometimes we do Zumba to ’80s or disco music,” she says while “Oye Como Va,” a 1963 Tito Puente original, popularized by Carlos Santana in 1970, is playing in the background.

Celebrity makeup artist Patrick Rosas exercises four times a week. He combines lightweight resistance training with Zumba. As a result of the intense workout, he dropped from 180 lbs to 165 lbs in two months.

“With all the eating and drinking, the body needs to burn,” he says. “It’s a check and balance. If you don’t move, you get sick. Zumba is a fun cardio dance routine. You have to release the endorphins to feel good. Besides, I can’t lift heavy weights. As a makeup artist, my hands have to be light. That’s why I don’t carry heavy luggage.”

He adds that he has made many interesting friends in his classes. “They are health buffs who are disciplined about keeping fit. It also makes me feel young. Everything is moving. No more back pains. The benefit of dancing is energy.”

Rosas likes to try out different teachers so he can learn new dance moves.

The group members bond after class and get close to Perez who also peddles his homemade siomai.

Designer Pepito Albert also takes up Zumba, but he refuses to be photographed or interviewed. While waiting for the instructor, he warms up with ashtanga yoga. He says the secret of youth is the inversion postures in yoga such as the bridge, shoulder and handstands.

When he does Zumba, he rocks. Albert sets an example of doing yoga stretches particularly for the legs and abs, if a Zumba class doesn’t offer warm-up moves.

Although Perez’s class is a high-octane workout, some dance at their own pace instead of getting carried away by the music and overdoing it.