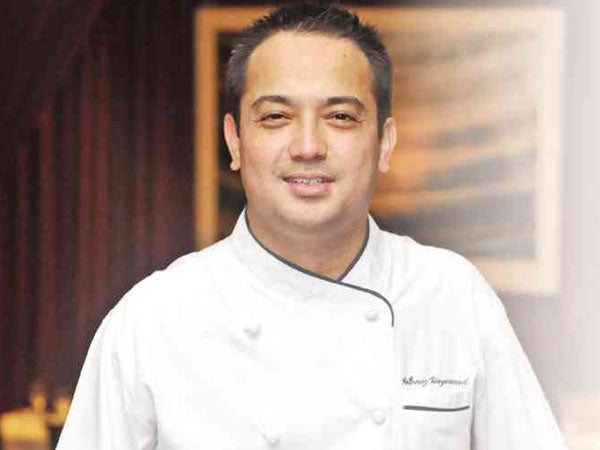 CHEF Anthony Raymond: “It’smy responsibility to elevate the skills, create kitchen-standard guidelines and beat the giants out there.”

At 36, Raymond is tasked to provide culinary and management direction to the entire Discovery properties—a job that thrills him no end, and a work that will certainly push him to do his best.

“My job is to foresee and manage the properties in terms of running the kitchen and its manpower,” said the good-looking Raymond. “It’s my responsibility to elevate the skills, create kitchen-standard guidelines and beat the giants out there. I love the odds. We are a homegrown Filipino company, and I am blessed for inheriting a group of talented Filipino chefs and cooks who have the heart and passion to succeed in today’s kitchen world.”

David Pardo de Ayala, Discovery’s resident manager, said Raymond is the perfect man for the position he vacated. He admitted it took the company some time to look for the new guy.

“Because it was like we are endorsing our children to someone else,” said De Ayala. “We wanted to make sure the person who will replace me will not only bring the restaurants to new heights, but also the diners to the next level.”

“We were targeting the new generation of chefs,” said De Ayala. “We are a young kitchen and it reflects in our way of thinking, cooking and running things in the house. We needed someone who is driven, young, full of ideas, innovative and inclined toward continuing knowledge and research, because he’s going to be the backbone of our kitchen.”

Raymond has an impressive culinary career, spanning over 15 years at establishments that include a five-star and five-diamond hotel (The Peninsula Beverly Hills), a French Michelin-star restaurant (Stella Maris restaurant in Paris) under the tutelage of Michelin star chef Tateru Yoshino, and catering alongside restaurant competitors Wolfgang Puck of

In the Philippines, he worked as sous chef for The Peninsula Manila’s Old Manila Restaurant alongside chef de cuisine Adrian Mellor, who taught him how to enhance his palate, and under the supervision of chef de cuisine Nicholas de Viche, who mentored him on food presentation. He credits executive chef James Overbaugh, meanwhile, for showing him how to manage and operate a professional kitchen.

Raymond, whose parents are both from Dumaguete City, was born in Manila but moved to Puerto Rico with his family when he was 6. They stayed in Puerto Rico for three years before relocating to the United States where they resided for almost a year.

“But we lived predominantly in Singapore for nine years,” said Raymond, who finished high school in Singapore.

In college, he took up Bachelor of Arts in Business Psychology at the University of Arizona, Tucson—but midway through, he suddenly felt he wanted to pursue culinary school instead.

“I wanted to be in sports psychology,” Raymond recalled. “But, I had an elective subject called restaurant management. It was twice a week and people would really come to listen and talk to entrepreneurs. Immediately, I felt I would like to have my own restaurant and become an entrepreneur myself.”

After graduation, he flew to Paris and studied at Le Cordon Bleu and gained a Le Grande Diplome in Cuisine and Pastry. He also took a certificate course in Restaurant Revenue Management at Cornell University in New York.

Raymond recently gave a sampling of his dishes to a select group of Philippine media. The six-course dinner, a merry mix of pork, chicken and beef, was paired with the Happy Living range of California wines.

First to be served was Scrambled Scallops with Squid Ink Brioche and Caviar. The presentation was pretty unique: eggshell stuffed with a creamy mix of scallops and soft boiled-like egg and delicately topped with caviar. A little scoop of this egg dish and a bite of the nicely toasted brioche was a match made in heaven.

The first course was paired with a glass of Schramsberg Mirabelle Brut (Calistoga, California), which had tropical fruity notes and a zesty finish.

Then came Crispy Pig Ears served with Citrus, Petit Greens and Honey-Date Vinaigrette. If you think pig’s ears are for the Pinoy sisig alone, think again. Raymond made it an integral part of a refreshing salad dish.

Here, Raymond showed his dexterity by using the less popular cut of meat and pairing it with mixed greens drizzled with honey-date vinaigrette and mango balls. The crispy, bacon-like texture of the meat was a nice contrast to the exuberance of flavors from the sweet dressing.

“What we did here, we cut the pig’s ears and blended the meat with the stock that also has the other parts, such as pig’s head, bones, etc.,” explained Raymond. The stock was then

To warm the tummy after a refreshing salad, a bowl of thick and creamy Corn Chowder with Charred Corn, Halloumi Cheese and Kalamata Olives was served. The tartness of Halloumi, a fresh white cheese like kesong puti, and the briny saltiness of Kalamata olives, balanced the summer-sweet taste of charred corn.

The meltingly tender beef was braised for 14 hours and served with thin slices of black truffles, butternut squash puree and baby carrots; while the chicken was given a twist by being presented three ways in one single plate: farm-raised chicken oysters, crispy chicken skin, and red wine-poached organic egg.