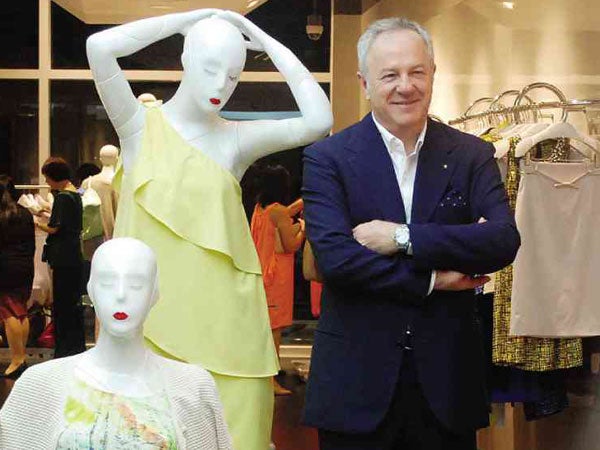 When Giuseppe Stefanel, chair of the family-owned Italian ready-to-wear brand Stefanel, first came to the Philippines 15 years ago, he felt that the country wasn’t ready yet for his products.

“I came to Asia on a swing to see how things were in the region,” he said. “I like to see things for myself,  and the Philippine market at that time was too early for us.”

Although Stefanel was carried by one of the country’s leading retailers then as part of its multi-brand offerings, it didn’t have a single standalone store to showcase the full range of its collections. But in less than two decades, the businessman noticed a number of welcome changes in the Philippines.

“Manila is a totally different place from the one I saw before,” he said. “It has changed completely. And the people’s standard of living in the Philippines

has improved a great deal.”

In short, the market is now ready for Stefanel, a company that was established by Giuseppe’s late father in the early 1950s, and its brand of fashion consisting of mid-priced women’s dresses and separates made of such materials as knits, linen, cotton blend and silk. To complete the look, it also carries a select line of accessories such as shoes, bags, belts, necklaces and scarves.

“Our DNA can be traced to knitwear,” said Giuseppe. “My father started sourcing and manufacturing materials produced by the region’s artisans. Over the years, the look and materials used have evolved. We’re still using a considerable amount of knitwear using imported cashmere and special yarns, which we created ourselves.”

Stefanel also uses a great deal of linen materials for warmer seasons. Its shirting materials are made of high-quality fabrics in silk and cotton. Cuts and silhouettes either skim or are close to the body.

To help realize the brand’s vision in Asia, it partnered with Nouvo Moda Concept, a subsidiary of the SM Group, sometime last year. The deal resulted in the opening of Stefanel’s first exclusive store in the Philippines at  SM Aura in Taguig.

Giuseppe was also pleased to note upon his return to Manila that a certain positive vibe is in the air. And just as he suspected, Filipinos were in a

buoyant mood, which is reflected in the way they dress up. He’s confident that the “Stefanel look,” consisting of pieces in attractive solid colors and chic prints, has a place in the Philippines.

“I can see that women here are equally comfortable wearing solid colors as well as prints,” he said. “And that’s good for us.”

After all these years, the company, which has its headquarters and factory just outside Venice, has remained a family business. When Giuseppe’s father passed away almost 30 years ago, he assumed leadership of the company. His sister used to help him run the company, but she has since left Italy for Germany.

Giuseppe’s two adult children have yet to join him in the business, but they seem to have started their careers on the right track. His daughter works in Gucci’s marketing department in New York, while his son is paying his dues as chief merchandiser and product manager of several duty free shops in Hong

“We are a family with a strong tradition for fashion and business,” he said. “I guess it runs in our blood.”

Despite the brand’s use of knits in many of its pieces, Giuseppe said that Stefanel is totally different from Missoni, another iconic Italian brand also famous for using knits.

“While Missoni is only focused on knitwear, we also use other materials,” he said. “It doesn’t have that many shops as Stefanel does. And Missoni is more of a designer brand, while ours is purely a ready-to-wear brand that’s more affordable to consumers.”

Stefanel has more than 40 stores all over Asia, the bulk of which are located in China, Japan and Korea. In China alone, Stefanel has 15 stores. He sees the

number growing dramatically to 50 stores in the next three years.

Although he wants to have a bigger presence in the Philippines, Giuseppe is careful not to expand too fast and too soon. Apart from the market’s response, expansion would depend on the region’s actual growth, he said.

“I think opening four or five more shops in the Philippines would be okay. After that, we will see. With a population of 100 million, there’s definitely a big market in the Philippines. The potentials are great.”