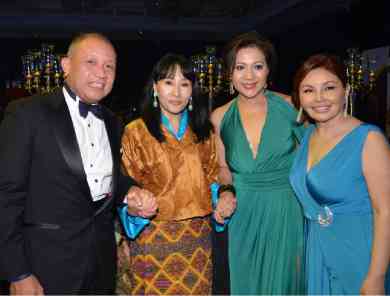 At the swanky Shangri-La Makati last week, women in ball gowns and men in elegant black ties breezed into the foyer of the hotel’s grand ballroom.

Occasion was Lifestyle Asia’s 26th anniversary celebration, which took on the Bhutanese theme.

The Manila Symphony Orchestra performed superbly. It was followed by the beautiful Lauren Liechtenstein, who showed that besides being a scientist, she is also an awesome soprano, dahlings.

Among the A-list crowd were Globe president Ernest Cu, whose telecommunications company was co-presenter, and Felix Ang, who provided Mercedes Benz S-class for the highly

The 800 or so stellar guests included Cabinet members with their spouses, tycoons, diplomats and some of Manille’s very elite high-society members, palanggas.

Among the guests was Mario Katigbak of Bulgari and Hermes.

Foreign Secretary Albert del Rosario said “it was an elegant and delightful evening.” His adorable wife, Gretchen, said she particularly enjoyed the music.

Ricky Razon’s gorgeous daughter Kat went up to the DJ booth and spun music that had the chi-chi audience rushing to the dance floor and rocking it.

Company presidents, ambassadors and taipans gamely removed their tuxedos for the grinds, twirls and Travolta moves.

Days after, people were still talking about the cool queen who got up to join the flash mob.

Yes, dahlings, it was the grandest bash of Lifestyle Asia to date, and, dahling, it wasn’t even a ball.

From stylish cities around the globe, Mexx has come to Manila with a bang, holding a fashion bash at the posh East Wing Atrium of One Shangri-La.

“We are very proud to present our latest collection to our Philippine market,” said Peter Hammond, senior vice president for Asia-Pacific of Mexx. “And I am confident that the Filipinos,

with their fun and adventurous sense of style, will embrace the vibrant Mexx fashion.”

“With two new stores in the pipeline, Mexx followers can look forward to adding that extra dash of European chic to their wardrobe,” Hammond said to the applause of the satisfied invitees.

Retail powerhouse Penshoppe had everyone talking with its highly anticipated Holiday 2013 showcase during Philippine Fashion Week at the SMX Convention Center’s Hall 2.

“This is only the tip of the iceberg,” said Penshoppe brand director Jeff Bascon. “Cooler things are yet to come from Penshoppe. We’re going to have a stronger point of view when it comes to fashion and we’re excited to share it with the rest of the world.”

Unlike previous shows that boasted international celebrity endorsers taking to the runway, this season’s highlights were right where they mattered: The clothes were the mega stars of the show.