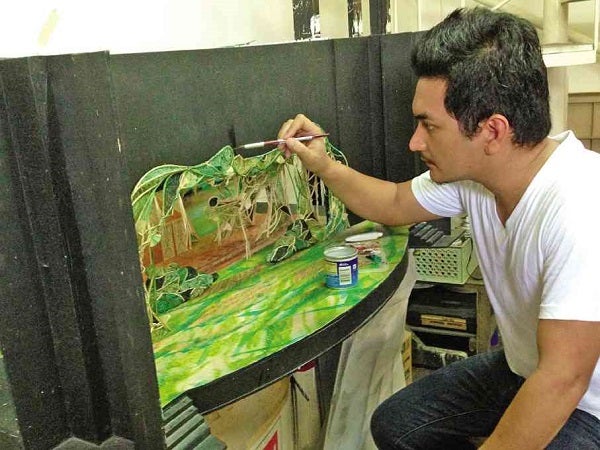 Lex Marcos works on the scale model of the set design for “Disney’s Tarzan.”

There are ‘triple threats,’ and then there’s Lex Marcos–a ‘sextuple threat’

Actors are usually called a “triple threat” when they do three things: act, sing and dance.

Lex Marcos is an actor who betters that description: He also does set and lighting design. Actually, he also sings and dances. And he paints, too. Six disciplines, so, technically, he’s a “sextuple threat,” but who’s counting?

He just wrapped up an acting and set design gig earlier this year with Philippine Educational Theater Association, playing Orsino in “’D Wonder Twins of Boac.”

“Tarzan,” which opened Friday night at Meralco Theater, is directed by Chari Arespacochaga and features Rachel Ann Go as Jane and Dan Domenech in the titular role. The stage version of the 1999 animated film based on “Tarzan of the Apes” by Edgar Rice Burroughs has music and lyrics by Phil Collins and book by David Henry Hwang.

“Adarna,” the classic tale of Don Juan’s search for the mythical Ibong Adarna that can cure any sickness with its song, will be staged by DUP in July using a version of the story by Antonio Buenaventura and Vitaliana Pineda, with additional text by Vladimeir Gonzales.

Marcos had always loved to draw. “As a child, I drew stick figures. As I got older, I would copy superheroes from comic books like Superman and Batman,” he says.

He took up a certificate course in painting and then a bachelor’s degree in Art History at University of the Philippines. It was during college that he started engaging the different disciplines related to performing.

Marcos had grown up surrounded by musical influences. His father worked as a soldier and was a member of the Philippine Constabulary Band and Manila Symphony Orchestra, while his brother sings and plays guitar.

He joined the glee club in elementary school and choir in high school. “When I got to college, I auditioned for UP Concert Chorus. I found out that the group goes on international tours once in a while and it became my motivation to join,” he says, laughing.

He was accepted and, yes, got to tour parts of the US and Europe with the group.

Upon his return to Manila, he wanted to continue performing, though acting this time instead of singing. He started auditioning for plays and soon landed his first major production with DUP’s staging of “Kanjincho,” a kabuki play.

“That was the first time I met [DUP founding artistic director] Tony Mabesa. He found out that I’d been a member of UPCC, so he cast me as Yoshitsune, a noble lord, a role that required a high-register voice.”

“The theater majors started asking me to perform in their thesis productions. Oo lang ako nang oo. It was all new to me and I really wanted to learn more.”

Marcos has since been in several productions for DUP and Peta. In the past few years, however, most of his theater productions have had him in the backstage disciplines. 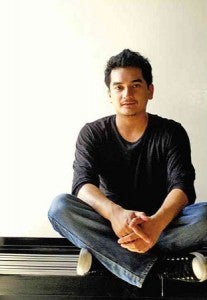 After a few years of acting on stage, an interest in designing sets began to develop. He was advised by José Estrella, one of DUP’s resident directors, to take classes under Amiel Leonardia in the university’s theater program. Marcos wouldn’t earn any credits from cross-enrolling in the set design class since it wasn’t part of his Fine Arts curriculum, but, again, he was so eager to learn.

At the end of the semester, Leonardia asked Marcos to stay after class and told him, “You have a big problem.”

Marcos thought he’d made a mistake with his assignment. As it turned out, Leonardia asked Marcos to design the set for “Ang Birheng Matimtiman,” a Filipino translation of Niccolo Machiavelli’s “The Mandrake,” a production he was about to direct for DUP’s UP Playwrights Theater series of new works.

“I was overwhelmed but I said yes. Then [Leonardia] said to me, ‘So, isn’t that a big problem?’ and he laughed out loud,” Marcos recalls.

Other set design projects followed. When Marcos designed the set for UP Center for International Studies and Japan Foundation’s staging of “Ang Paglalakbay ni Sisa, Isang Noh sa Laguna,” his work caught the eye of lighting designer Shoko Matsumoto. She invited him to join her lighting design workshop.

“That’s when I became more interested with lights,” he says. He took the workshop and even joined Matsumoto as part of her crew in some of her productions to familiarize himself with the craft. He further honed his knowledge with a lighting design class, again under Leonardia.

Marcos’ cross-disciplinary experiences help feed each other: “In my painting course, I was exposed to different styles of art, from realistic to conceptual art, which helps with my set design process. My sensibilities as an actor help me define the space when I’m creating a set design.

“These sensibilities also come into play when I’m designing lighting, when I define the scenes and sculpt the actors. Conversely, when I’m acting, I become more aware of the space and I know where to find my light.”

His theater work has kept him from his painting, but it has also inspired some pieces. He’d been in group shows before, but Marcos was finally able to mount his first one-man show, “El Eco,” in 2010. He showcased works based on the surrealist poetry of Miguel Hernandez, a character he portrayed for DUP’s the “Recoged Esta Voz/Gather This Voice/Tipunin Itong Tinig” in 2004.

When it comes to the mix of disciplines he juggles, he sees himself as “a theater artist focusing on design, but I would really like to start painting again and hopefully join group exhibits and put up another one-man show.”

For his work in “Tarzan,” Marcos will be creating an original set design. “I prefer not copying from original versions of foreign productions. But it wasn’t allowed anyway, so good for me,” he says, laughing.

Marcos will be using indigenous materials like rattan and abaca to recreate the jungle setting for the musical: “My approach is stylized. When I presented the design, I already imagined it with lighting and I presented it in a way for [VAT and Disney Theatricals] to have a clear vision of how the scenes would look like. Fortunately, they approved it.”