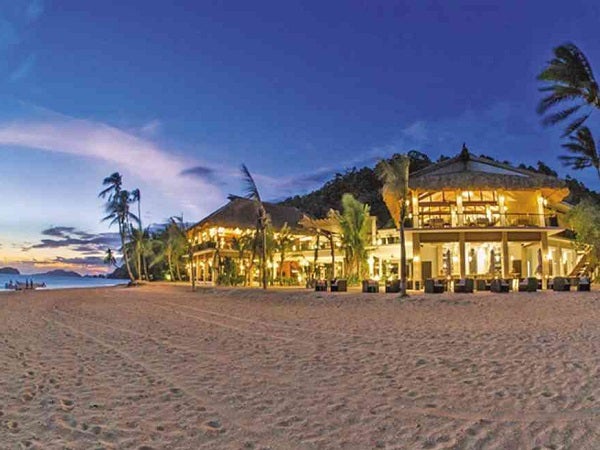 SINCE the tradewinds greatly alter Pangulasian’s beach front, its designers decided to respect natural patterns and build behind the treeline.

The new face of resort luxury

Discretion and a deep respect for the environment now figure among the top considerations of the luxury class traveler. Nowhere is this more apparent than in Pangulasian, El Nido Resorts’ (ENR) top-end property on celebrated Bacuit Bay in Palawan.

Occasionally called “Pangga” by the resort managers, it is the fourth and newest property of the cluster of resorts that recently won the Community Benefit Award of the Tourism For Tomorrow contest, one of the most prestigious global awards aimed at recognizing best practices in sustainable tourism.

In Miniloc, Lagen and Apulit islands, on which the three other resorts are built, limestone cliffs tower over the landscape.  Pangulasian is unique for the breathtaking expanse of white sand shore that faces one of the world’s richest marine reserves. The bay, along with the rest of Northern Palawan, was deemed by government a protected area in 1998.

According to Marly Laraya, senior architect of Ayala Land, a principal of ENR, great pains were taken by the design team to respect the natural cycles of the island. Pangulasian’s expanse of beach, for instance, is greatly influenced by the prevailing trade winds. The amihan or cool northeast wind will blow the sand a certain way at one time of the year; and another direction, during the habagat or season of the southwest wind.

“We thus decided not to tamper with those patterns and to build behind the treeline,” she says. From the shoreline, the palms obscure the spacious, thatched villas that provide their occupants quick access to the beach as well as great privacy. Still along the shoreline but away from the stretch of beach, select villas provide plunge pools and the best sunset views.  For exclusivity, there is a cluster of four pool units arranged around a private lap pool.

Towards the elevated interior core of the island, villas were built on stilts and offer views above the treeline of the bay and the other islands. The stilts allow the water from the hills to flow down naturally and percolate back into the ground.

Since light-sensitive sea turtles lay eggs on the island at night, electric lights are kept soft and warm white. “We want them to keep coming,” says Laraya.

The construction process itself reverted to traditional means of transportation by barges and sleds. Instead of bringing heavy machinery to the island, fabrication was done outside and assembled onsite. Big pieces were carried on farmer’s sleds instead of trucks.

Ten Knots Development Corp. (TKDC) hired a powerhouse team to build this luxury eco-resort. Leandro Locsin and Associates, led by Andy Locsin and Ed Ledesma, infused elements of the bahay kubo such as the raised floors, the pitched roofs and prodigious openings. The architects also defined luxury by the space made available to guests. Among the El Nido Resorts, Pangulasian has the biggest villas which measure 65 sq m. They are equipped with 20-sq m bathrooms with tubs placed by the windows that let you indulge with a landscape view.

Laurent Lamasuta, TKDC president, discloses: “All the modern luxuries are there. We offer the option to sleep without air-conditioning. The screens can be pulled down. A lot of people want to sleep on the beach and hear the waves. They are happy to pay a premium for that.”

The link with nature is emphasized by the natural materials incorporated in the interior finishes and furnishing. Noel Saratan infused artisanship and other traditional elements in the thatched roof. The cogon is woven to facilitate the escape of hot air as well as to create a sense of place.

Architect Conrad Onglao created an organic look for the interiors—recycled Indonesian teakwood flooring for richness and durability, and fiberboard walls with rice husk for texture. At the bar of the main clubhouse, he expressed his reverence for nature through tables that feature bases of wood trunks and twigs.

Designer Kenneth Cobonpue conceptualized the lamps and wall sconces inspired by fishermen’s lanterns. The spaces are adorned with art pieces and woodworks by Ricky Baylosis and authentic Palawan crafts. Photographer and industrialist Jaime Zobel de Ayala’s montage of leaves dominates the reception area. His mosaic pattern is mimicked on the feature wall carved in Indonesian stone.

The villas are set out around a 25-meter lap pool and the Pangulasian resort center that has a library, boutique, conference area, game room and lounge which can be used for yoga or a conference center.

However, it’s really just not about the casitas and facilities, but what’s in the water or the underwater that counts. The entire El Nido Resorts area is bounded by dive sites and cerulean lagoons. Guests snorkel into the marine world and witness the multifaceted marine civilization that come in a plethora of vibrant and unusual forms and sizes.

In all, Pangulasian is an eco-resort that levels up the standards of sustainable tourism in the Philippines.