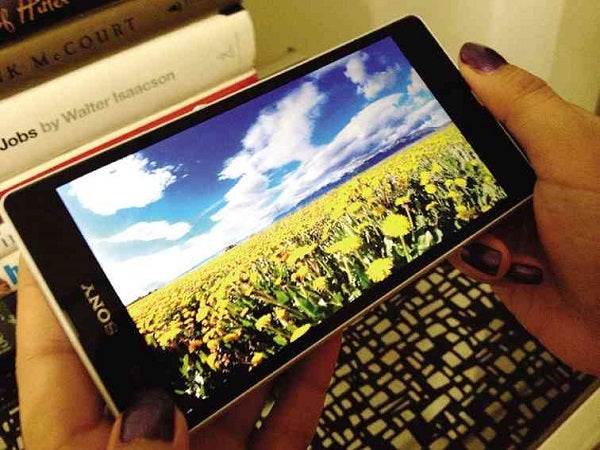 THE SONY Xperia Z’s display is like that of a Bravia TV: Full HD reality display on a 5-inch screen. PHOTO BY ANNE JAMBORA

The Candy Crush bonbons are, from an angle, distorted, but their colors just as sharp and crisp on the screen now that they are submerged in water. On the flipside, the Sony Xperia Z’s back cover gleamed in its pristine whiteness.

My heart stopped as I saw a bubble emerge from its second microphone, the tiny dot next to the camera lens. I nearly panicked!

This is not an unfortunate incident where a smartphone accidentally falls in a body of water, or, in this case, a large jarful of it. The handset had been deliberately dunked (though not without some trepidation), to test what I had witnessed weeks ago, at an exclusive media launch.

It was an intimate group, and the act—the finale to a well-orchestrated dinner—filled the presidential suite of Peninsula Manila with loud oohs, followed by applause. We were awed.

The Sony Xperia Z (the “Z” pronounced as zed), the Japanese electronics giant’s smartphone headliner this year, has a lot going for it when you get past the fact that, yes, it’s completely and impressively waterproof and dustproof. You can drop it in the loo, wash it in the sink as many times, and even use it under the rain this monsoon season without worries that it will go kaput on you.

Five-inch displays now are standard for high-end smartphones, and Sony is in on this trend. It goes even further, as the display is like that of a Bravia TV: Full HD reality display on a 5-inch screen. The colors are so vivid on the Xperia Z that the Candy Crush candies on my year-old iPhone 4S look pallid side by side.

Years ago, it was with reluctance that I traded in my last Sony Ericsson phone to the company-issued BlackBerry (and, later, my BlackBerry to an iPhone, but that’s for another story). SE was the only mobile phone brand I knew that bore one feature so useful to journos: It could record voice calls/phone interviews. It was a native function of the SE, and I knew colleagues who relied on the feature just as much as I did.

In fact, it was the first thing I asked Patrick Larraga, the then outgoing Sony Phils. head for mobile business (he has since moved to the Singapore headquarters) at the Xperia Z’s launch. The feature, I was dismayed to hear, was gone. “You can probably get it as app in the Play Store,” he told me. (True.)

I haven’t held a Sony handset for sometime, even as I had gone through several models of the brand back when it was still called Sony Ericsson. Even at the time, the SE’s integrated camera (at only 3.2 megapixels in the K series) was already a joy to use; it took photos that oftentimes were far sharper and clearer than my point-and-shoot.

In the Xperia Z, Sony has gone leaps and bounds with its camera: 13MP with the Exmor RS technology that allows for highly detailed shots and videos even in low-light conditions.

Best part for this user, I can take fantastic still shots while recording a video! This feature was well tested at the recent Aerosmith concert here: We were seated in the last row of SM Arena’s nosebleed section, and yet I came home with better-than-decent videos and photos that I could almost see Steven Tyler’s tonsils.

Because it’s waterproof, you can also take photos in the rain or by the pool.

The Xperia Z is gorgeous for its sleek, slim lines and reflective surfaces. Its width, however, is a bit of a handful—literally—for someone with small hands and is used to the size of the iPhone.

It’s tough, tempered glass throughout. There are no obtrusive knobs, only the aluminum power and volume buttons on one side. Unlike plastic, the material used by some of its major competitors, the Z feels solid and expensive in the hands. Even better, it comes in three color options: black, white, and purple.

NFC (near field communication)-enabled, the Xperia Z easily connects to other devices. With its screen-mirroring function, you can easily view photos from your smartphone on a Bravia TV with a single tap on the TV’s remote. Same single-tap allows media sharing between phones, or phone to NFC-enabled laptop.

The Xperia Z has a Stamina Mode feature that detects when certain apps or functions are not in use; it turns them off automatically to save power.

It’s never easy for non-techies to take to new platforms or switch gadgets every so often. And at the speed of tech advances and turnout of new gizmos, the exercise gets even trickier and more confusing.

Once in a while, however, you’re presented with a choice that speaks to you not only on the aesthetic level, but has real features that respond to your needs, not just some flashy, gimmicky new functions that you won’t really use. The Sony Xperia Z is one such choice.