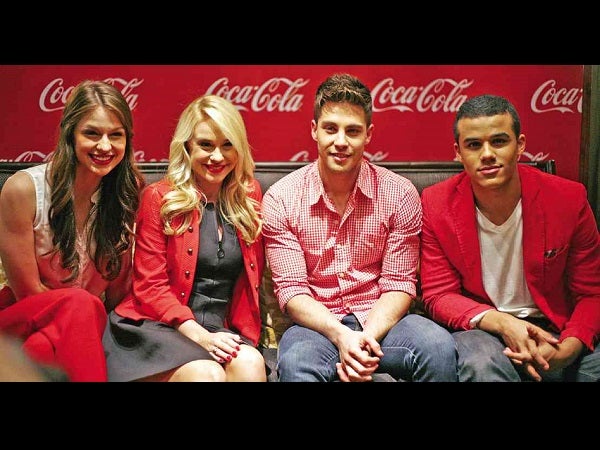 BEING cast in “Glee” is a surreal ride for the four.. PHOTO BY KIMBERLY DE LA CRUZ

Glee is a show that resonates among many TV viewers because of the way it celebrates individuality and tackles timely youth issues. All this plus awesome singing and dancing from its talented cast make for an entertaining 40 minutes every week.

This season’s batch of fresh faces were so well-received on the show that they found themselves on a plane to Manila as Coca-Cola’s latest brand ambassadors. Jacob Artist (Jake Puckerman), Melissa Benoist (Marley Rose), Dean Geyer (Brody Weston) and Becca Tobin (Kitty Wilde) were here recently to promote Coca-Cola’s global “Open Happiness” campaign, which took them around malls in Metro Manila to meet fans as well as to unveil crates containing the brand’s latest product, the 300 ml “Coke Mismo.”

Inquirer Super sat with the foursome and asked them about their real-life struggles to make it in Hollywood, staying positive amidst rejection, and how to keep it real in glitzy Los Angeles.

Being all relatively new on the scene, how has “Glee” changed your life?

Becca Tobin (BT): Absolutely 180 degrees. From previous years of being an actress, our norm is usually unemployment, auditions and being told no a lot. So when we got this great, big yes at “Glee,” we’re just pinching ourselves everyday that we’re so lucky to be able to go to work everyday and do what we love to do.

Jacob Artist (JA): It’s pretty much flipped since the day we got the phone call and we got the parts. Everything’s been quite a ride. It’s unbelievable in every aspect.

Melissa Benoist (MB): This job conditions you to expect the unexpected at all times. That’s kind of how life plays out now.

Dean Geyer (DG): I don’t think it’s really changed. I kind of separate my personal life from my job. It’s definitely changed how much I work, obviously people recognizing you in public, but it really hasn’t changed that much.

You deal a lot with issues that teenagers face—insecurities mostly. How did you deal with your own insecurities?

JA: We’re no different from anybody else, we have our own insecurities for sure. It comes with age, you get comfortable with yourself.

MB: It’s a never-ending learning process. There’ll always be new insecurities that crop up that you’ll have to learn how to deal with. The show definitely taught me how to identify something that I need to work on in myself and be proud of what I have and just better myself everyday as a person. Or try to.

BT: I think, as a female, it’s difficult with every kind of issue—weight, appearance. If you turn on the TV, you see a lot of altered faces and bodies, and I think that it’s really tempting. You see it and you think that’s what the public wants to see. But more than anything, we get contacted by people on Twitter just thanking us for touching on the issue and not being perfect.

DG: I think once you join a new show on such a high scale, just being surrounded by brilliant musicians and actors, coming into a show not knowing them personally makes me very insecure. But then you learn once you get to know them that nobody’s judging you. On the set of “Glee” everyone’s so welcoming, there’s a great unity there, and your insecurities fade away.

What advice do you have for aspiring actors struggling to make it in Hollywood?

JA: If you’re really passionate, go for it. I never thought I would be an actor. I was really, really excited and passionate about it and I just stuck to it, and now I’m on “Glee,” so I would say pursue your dreams, a hundred percent.

DG: I think one of the mistakes people make is that a lot of them are all passionate about acting but they have very high expectations in a very short time. I think it’s important to understand that for them to have goals is a great thing, but take your goals as steps instead of thinking far ahead of things. Acting is a funny thing, you get a lot of “no’s”—way more “no’s” than yeses and we all understand that. That’s another thing they have to understand if they want to pursue acting.

MB: You have to realize that not everything that glitters is gold. It’s a lot of hard work, you have to put in the time.

BT: I think you should know who you are both as a character and the roles that you’re ripe for, also who you are morally as a person. Before you get to LA you have to figure it out, ’cause it can be difficult and you can feel alone and tempted by a lot of stuff that seems sparkly. Keep a good support system, that’s really important.

What traits do your characters have that you’d like teens to emulate?

BT: Absolutely nothing. Except maybe her honesty at times, when it’s appropriate. Her strong opinions and willpower.

JA: I would say Jake’s commitment to doing something that he loved, ’cause initially when he started the show he didn’t want to join the glee club and was afraid of what everybody would think. I think what he did was really admirable.

DG: Not a whole lot, but I agree with Jacob. My character was very committed to where he wanted to go with his career to the point where he did stuff that are not that great. He was so committed that he did something I wouldn’t want young people to associate themselves with. He is committed to what he wants to do, so that’s one positive trait.

How do you stay positive when you read criticisms on social media?

JA: We have so much fun on set, just talking and joking around. Personally, I don’t look at that stuff a whole lot, but I think it’s good that we have a great dynamic, and these people are probably going to be our friends for years to come after the show, so we’re just having a good time and not taking ourselves too seriously.

BT: It can be fleeting, so you really have to enjoy it and focus on the positivity, ’cause if you let the negativity affect you, you’re going to blink and it’s going to be over and you didn’t even get to enjoy it.

DG: I think you’ve to realize that not everybody’s gonna like what you do. And that’s gonna be like a running topic for your whole life as an actor. Also, you definitely have to separate acting from your personal life. A lot of people associate who you are as an actor. You can’t get into that mindset, you have to realize you are your own person. I’m not Brody. I’m not a male prostitute.

Name something about yourself that would surprise people.

MB: I was a member of the Star Wars fan club. I still am. Since I was six years old.

JA: I was a ballet dancer.

BT: When I was a struggling actress in New York, I had some weird jobs. I shoe-modeled and I had an airbrush tanning company.

DG: People know everything about me. That’s kinda sad. I got this scar from playing rugby.

JA: I am so happy you mentioned that because I have been wondering it (the scar) two questions ago.

What was the first song you ever committed to memory?

BT: I got a karaoke machine one year for my birthday and the tape I put in over and over and sang was Bonnie Raitt’s “Let’s Give Them Something To Talk About.”

MB: Mine must’ve been something Disney-related.

JA: Me, too. Or something from Barney. I loved Barney as a kid.

DG: We used to go on a lot of family trips. Roxette’s “It Must’ve Been Love,” I remember that so vividly, like on our road trips when we still had cassette tapes, it used to play over and over again.

What age were you when you realized you wanted to become a performer?

DG: Not for me. I thought I was going to be a professional sportsman or something.

MB: I was pretty young, I was three years old when I started dance classes.

BT: My parents probably knew before I knew ’cause I was putting on shows endlessly, in front of the fireplace every night.

JA: Did you make them pay?

BT: I should have. I make them pay now. I was pretty young, four or five.

JA: Watching Barney, I would just kind of bob around the house, just moving and my parents were like, “Do you want to become a dancer or something? You don’t stop moving.” I think that’s kind of the birthplace of performing.

If you guys were the directors of a Coca-Cola-based Glee club, what would you name it?

JA: Who invited Mr. Schuester? There you go.