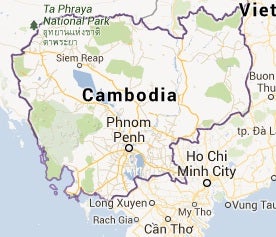 In what it called a world exclusive, the Sydney Morning Herald said the city, Mahendraparvata, included temples hidden by jungle for centuries, many of which have not been looted.

A journalist and photographer from the newspaper accompanied the “Indiana Jones-style” expedition, led by a French-born archaeologist, through landmine-strewn jungle in the Siem Reap region where Angkor Wat, the largest Hindi temple complex in the world, is located.

The expedition used an instrument called Lidar — light detection and ranging data — which was strapped to a helicopter that criss-crossed a mountain north of Angkor Wat for seven days, providing data that matched years of ground research by archaeologists.

It effectively peeled away the jungle canopy using billions of laser pulses, allowing archaeologists to see structures that were in perfect squares, completing a map of the city which years of painstaking ground research had been unable to achieve, the report said.

Jean-Baptiste Chevance, director of the Archaeology and Development Foundation in London who led the expedition, told the newspaper it was known from ancient scriptures that a great warrior, Jayavarman II, had a mountain capital, “but we didn’t know how all the dots fitted, exactly how it all came together”.

“We now know from the new data the city was for sure connected by roads, canals and dykes,” he said.

The discovery is set to be published in the Proceedings of the National Academy of Sciences in the United States.

Damian Evans, director of the University of Sydney’s archaeological research centre in Cambodia, which played a key part in developing the Lidar technology, said there might be important implications for today’s society.

“We see from the imagery that the landscape was completely devoid of vegetation,” Evans, a co-expedition leader, said.

“One theory we are looking at is that the severe environmental impact of deforestation and the dependence on water management led to the demise of the civilisation … perhaps it became too successful to the point of becoming unmanageable.”

The Herald said the trek to the ruins involved traversing rutted goat tracks and knee-deep bogs after travelling high into the mountains on motorbikes.

Everyone involved was sworn to secrecy until the findings were peer-reviewed.

Evans said it was not known how large Mahendraparvata was because the search had so far only covered a limited area, with more funds needed to broaden it out.

“Maybe what we see was not the central part of the city, so there is a lot of work to be done to discover the extent of this civilisation,” he said.

“We need to preserve the area because it’s the origin of our culture,” secretary of state at Cambodia’s Ministry of Culture, Chuch Phoeun, told AFP.

Angkor Wat was at one time the largest pre-industrial city in the world, and is considered one of the ancient wonders of the world.

It was constructed from the early to mid 1100s by King Suryavarman II at the height of the Khmer Empire’s political and military power.