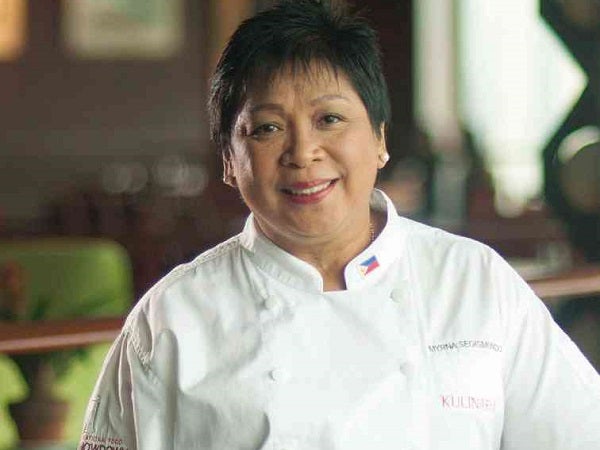 When Filipino food tells delicious stories, both old and new

At the preview of Lasang Pinoy at the Escolta of The Peninsula Manila, featured chef Myrna Segismundo told guests that there was no better way to explain one country’s cooking than through stories.

She was clutching a salt rock from Guimaras called tultul. And the story is what tultul is to our cuisine—a traditional way to flavor the rice by patting the rock salt on the grains, a process known as magdildil in Tagalog.

Stories explain our use of ingredients, the way we cook and the way we eat. The stories include history, explains who we are as a people and, to quote one of the great food books, “why we eat what we eat.”

That is how Segismundo explains her strategy every time she is asked to do a Filipino food festival abroad, one of the enlightened programs that promote food as part of our culture by the Philippine Tourism Board, headed by Chicoy Enerio.

Segismundo and her team are just back from a Filipino food festival in Fukuoka and Osaka in Japan. So the food that evening was not only a peek of how she serves food in festivals abroad, but was also an appropriate way to celebrate Independence Day, which was the schedule of the preview.

A better way to plate

In a high-end restaurant like Escolta, tultul can be grated using a microplane, the way it is done with cheese for Italian pasta. How some of the dishes were served that evening also showed a better way to plate our food, worthy to be served both for finer dining places or even at home.

Beef kaldereta, for instance, was placed inside individual pots or ramekins, underneath a crust that kept the meat and its tomato sauce warm and portioned quite attractively. And laing did not look like the green mess it almost always is, but was topped with bread crumbs, keeping it neat, then baked in the oven.

Yet presentation is only half of the solution. It is good cooking that shows in how the food tastes or should taste, according to the way good cooks have done it for ages. Flavors had time to meld in the kaldereta because it was cooked slowly.

The most important component in the molo soup is the broth, and good chicken stock was what we tasted. We looked for the right mix of coconut milk and taro (gabi) leaves with the shrimp, and they were there under the gratinéed breadcrumbs. Segismundo said she thought of using dessicated coconut, but didn’t because it would alter the taste of the laing. Knowledge of cooking taught her that.

Filipino food isn’t served in courses, and so appetizers are never a part of our dining experience. They become side dishes, instead. But in a setting like Escolta, we had appetizers for cocktails before sitting down to dinner.

Fresh vegetable spring rolls were encased in very sheer wrappers that recalled Vietnamese wrappers. There was assorted seafood kinilaw the way Visayans do it. There was pork chitterlings (chicharon) and dulong, which you could mix and match. All those were taken with concocted martini coolers like kamias with lambanog and ube-raspberry lambanog, and a non-alcoholic guyabano juice with basil.

It wasn’t a surprise for me to see two kinds of pizza as part of the Filipino menu. It has been a staple in many Ilocano restaurants using the crust as a way to serve pakbet, dinardaran (dinuguan), and eggplant omelet (poque-poque). Segismundo used tomatoes and garlic as topping for the ajillo and native sausage for the longganisa.

We were in for a double treat, as two carving stations were set up. There was roast beef, but this was cooked as adobo, where the story is about our way of combining stewing and braising. The other was boneless lechon de leche, pork deboned then wrapped around a filling of herbs, roasted and served with liver sauce cooked in red wine. That is Segismundo’s signature dish, a way of showing that this is her take on our famous lechon.

Desserts were laid out on a buffet table. Segismundo said that dessert dishes aren’t her forte save for turon, which she has perfected, and she then introduced two more flavors to the usual saba banana—mango and pineapple—and the budin, bread pudding that, she announced, is made from day-old Peninsula brioche.

There was guinataang halo-halo, called by different names in different provinces. Pastry chef Jill Sandique brought her pistachio sans rival and pavlova. The latter was a delightful surprise for our host, The Peninsula Manila’s Australian general manager Sonja Vodusek, who kept us in stitches with her Tagalog phrases like “walang anuman,” and her rendition of the other Filipino finger, pointing with her mouth.

Filipino cooking will be highlighted at the Escolta from June 17 to 30 for lunch and dinner (for reservations, call 8872888). You can probably tell your own story as you dine, about the food your lola cooked, for instance, or what you tasted on trips to our many regions, each with its distinct style of cooking and favored dishes.