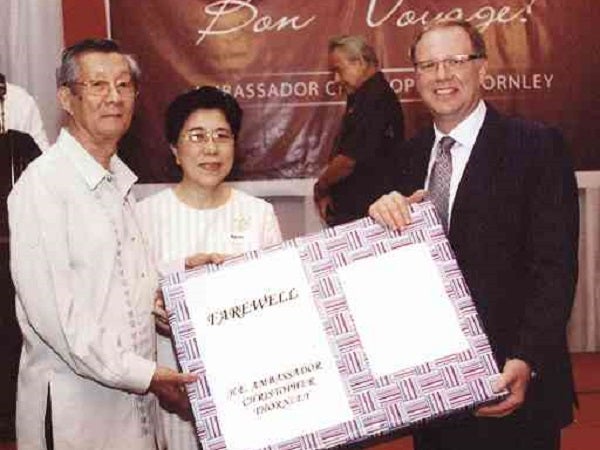 Canada’s Ambassador Christopher Thornley was in Cebu recently for the inaugural of the Canadian Welding Bureau Facility and Hospitality Center. The occasion feted the 115 graduates who went through an eight-month training program.

This was brought about through the initiative of the Cebu-based Primary Structures Educational Foundation of William and Paulette Liu, and the Canadian Welding Bureau. The graduates have started processing papers for jobs in Manitoba, Canada.

There was a grand celebration at the ballroom of Casino Español de Cebu. Aside from Ambassador Thornley, also present were Labor Secretary Rosalinda Baldoz and Honorary Consul of Canada in Cebu Robert Lee with his wife Anna.

The next evening at the Manila Room of Marco Polo Plaza Hotel, Consul and Mrs. Lee, along with a large group of friends, organized a farewell party for Ambassador Thornley who will soon complete his tour of duty in the Philippines.

The evening’s program was hosted by Francis Fulache of Word Broadcasting Corp. The invocation was by Herbert Buot who sang “One Little Candle.”

“I am sad, I cannot express what I feel,” said Consul Lee, noting that Ambassador Thornley’s three years in the country had gone so fast. “And we’ll miss you so,” sang Buot, expressing a collective sentiment.

Ambassador Thornley said being in the Philippines has been a great honor. He has made many friends and has learned so much from the Filipinos. “It’s been a wonderful experience,” he said, adding that Cebu will always be special in his heart.

“Cebu is a great city to come to, for a break or to work. The people make Cebu special, so hospitable, real and sincere,” he said. Addressing Robert and Anna Lee, he congratulated them, “You’ve done great things for Canada. Tremendous!”

To everyone in general he said he and his family will be back some day, on some beach in Mactan or Bohol. To Herbert Buot’s song “I May Never Pass This Way Again,” Ambassador Thornley said, “But I will.”

There were words from Ambassador Francisco “Frank” Benedicto who said, “All of us have mixed feelings because our dear friend will soon leave us. We will miss you.” He recalled with fondness the seven years he spent in Ottawa as Philippine ambassador to Canada.

Frank remembered how he had to get somewhere in a remote area in Canada and lost his way. He asked his driver to get instructions at a gas station. The driver found it difficult to understand, so the gas station owner said, “Follow me,” got into his own car, and led them to their destination.

Ambassador Thornley went up the dais and everyone thought it would be to give a response. In a way it was. Totally unexpected was his announcement that it was Anna Lee’s birthday, and wished her many happy returns of the day. He also led the birthday song.

These days Consul and Mrs. Robert Lee are busy preparing for a concert on Saturday, July 6, at 8 p.m., at the grand ballroom of Marco Polo Plaza Hotel. “An Evening of Inspiring Music” will feature their daughter soprano Aileen Lee Li, and the Voices Choir directed by Darlene Yap.

The event is for the benefit of Living Christian Church at Rosal Street in Cebu City. Those interested in attending may call Gardenia Saavedra at the Canadian Consulate in Cebu, tel. (032) 2563320.

Aileen Lee Li was born and raised in Cebu City. She started singing in various competitions and programs as early as age four, and continued to do so until she emigrated to Canada with her family.

Once in Canada, she enrolled in the Royal Conservatory of Music and studied there for four years. She obtained her Bachelor of Religious Education in Sacred Music at Ontario Bible College.

During her college years she auditioned for the Continental Singers of America and toured with them for two years. She toured Europe, the US, and the Caribbean Islands as soloist and first soprano.

After graduation, she worked part-time as music director in a few churches around the Toronto area, and went to school full-time to pursue her Master’s degree in Worship. She was choir director for Sounds of Joy, a choir representing Tyndale College and Seminary.

Aileen also pursued a doctorate degree in Liturgical Studies. Currently, she serves as worship coordinator for both Scarborough Community Alliance Church and The Hakka Alliance Church.

Thirteen years ago, Aileen, along with Maestro Lai and Winston Man, started the Toronto Cantata Chorus. They have developed the choir into what it is today by their hard work and dedication.

As choral master, Aileen continues to push and stretch the choir in every aspect of growth. She is married to Dr. Derrick Li and together they have two beautiful children, Anika and Joshua.