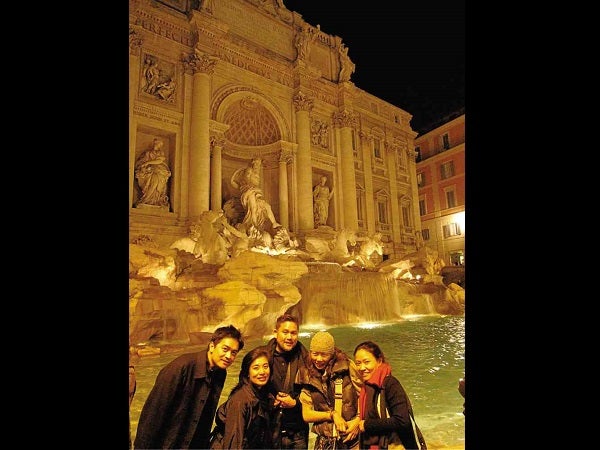 My lifelong bond with Rajo

I’ve never met anyone as consumed by his craft as Rajo Laurel. From playing dress-up with his sister’s Barbie dolls at an early age to now collecting real-life Filipina muses from celebrities to society ladies, Rajo continues to find bliss in dressing women up.

I can’t believe it’s been 20 years since my first wedding gown consultation with Rajo. The dress was not for me but for my childhood friend Tina.

Our first meeting had the makings of a potential fashion disaster. We were all sweating profusely as we met in his tiny atelier/apartment, a pristine, un-air-conditioned space in Makati.

I was accompanying my best friend Tina, a classmate of Rajo, to her initial bridal gown consultation. She was his first bride and I was her maid of honor/style consultant. I did not quite know what to make of his boundless creative energy. For him, anything and everything could be made amazing with a little imagination. He was exhilarating and exhausting all at once.

I don’t recall how the bride’s vision of a romantic medieval gown inspired by the period costumes from the movie “Excalibur” evolved into a medieval, backless “copper breastplate” fantasy with illusion sleeves. It sounded frighteningly outlandish.

The bride was to wear wildflowers in her hair and she was to enter the reception on a snowy white steed to the haunting tune of Wagner’s “Ride of the Valkyries.”

The concept had the epic proportions of a Lady Gaga concert on crack with the tearful drama of a Korean telenovela. We weren’t sure how he was going to pull it off, but even then, fresh out of design school, Rajo was already brimming with confidence. We found ourselves swept up into his vision.

Back then, Rajo already had that gift of persuasion. Tina was to be his first bride, and without our knowing it, we would be the start of Rajo’s bridal legacy.

And he already dreamt big. On the day of the wedding, Rajo had discerningly edited his initial interpretation and transformed Tina into a breathtaking, modern-day version of Guinevere. King Arthur would have been enthralled. I know I was. Not only was a bridal meltdown averted, but that day, a lifelong bond that now spans several continents was forged.

His love of fashion has figuratively and literally colored almost every major aspect of his life, from the stark white walls of his now air-conditioned design studio, to the ever-changing colors of his apartment (at present a calming peacock blue). Everything and anything is a potential source of inspiration for Rajo’s art, from the people he meets to the food he eats.

Over the years, his collections have reflected his travels and artwork collections. An African safari we traveled to in 2004 became the inspiration for his “African” collection which he showed in Kuala Lumpur, and a recent summer collection called Mali.

Visits to Tokyo reignited his love of all things Japanese, hence his Hanami Easter collection.

This year’s Samsung/Metrowear collection was a study in white, red and black. But unlike previous years, Rajo went inwards for his inspiration. He imagined himself going back to the days when he started designing. Accordingly, he did 70 percent of the cutting and sewing for this show.

With his flair for the dramatic undiminished, he balances incredible editorial pieces with surprisingly wearable ones. He is still as experimental today as he was when we first met, his artistic self-actualization is all about bringing something new and unexpected for others to devour.

Fifteen years after Tina, it was my turn to walk down the aisle as a Rajo Laurel bride. Rajo not only attended and designed two of my sister’s wedding dresses, he also sang an unforgettable a capella duet with me during the reception.

So, if I seem biased in favor of Rajo, forgive me. When someone’s vision shines so bright that it makes your world brighter, it’s hard to look away.

Multitasking is also second nature to Rajo, who squeezes time to work with Malu Gamboa in the Asian Cultural Council. Considered to be the “kids” in the board, they are joined by Ambassador Isabel Caro-Wilson, Maribel Ongpin, Ernest Escaler, Dr. Joven Cuanang and Josie Natori.

To celebrate Rajo’s 20th year in fashion and the Asian Cultural Council’s 50th anniversary, “The Labyrinth” will be held at the ballroom of Solaire Hotel & Casino on Nov. 15.

Mr. and Ms. David Rockefeller and Wendy Rockefeller O’Neill, ACC chair, will come to Manila for this milestone event, with other ACC board members from New York, Hong Kong, Tokyo and Taipei.