Auction comes from the Latin word auctio, meaning, “increase.” This is from the book “From Manet to Manhattan” by Peter Watson, which narrates the rise of the modern art market.

The early Romans were mad for auctions. The emperors Caligula and Marcus Aurelios “auctioned off their furniture… to meet debts. Auctioneers also followed the course of the Roman army, for its many victories provided enormous amounts of plundered booty and slaves. These were known as sub hasta, or “under the spear” sales. Thanks! Now we know why our auction sales are locally called “subasta.”

The laudable events of a couple of auction houses on the art scene has been creating ripples—no, waves—of excitement among our collectors. Fortunately, the art community has already been made aware of the wisdom of investing in art which, like real estate and jewelry, can with time only accelerate in value.

Not only the moneyed collectors benefit from these auctions, but also art scholars and enthusiasts. For one very specific reason: The auction houses often yield a harvest of previously unknown and unseen masterworks, indeed never even featured in reproduction in books and art magazines. Each auction can be truly regarded as a semester in Philippine Art 101.

An impressive instance is the forthcoming auction of Leon Gallery on June 29, which is expected to trigger what is termed in the media as “a fierce bidding war.” The gallery has, with justice, trumpeted the event as “a spectacular midyear sale.”

On the block are an exquisite pair of man and woman tipos del pais figures, in mint condition, by the 19th-century painter José Honorato Lozano. He was better known for his Letras y Figuras, a visual art form that flourished in the 19th century.

Interestingly Lozano was the son of a lighthouse-keeper, thus it is said he had “this vantage point with which to observe the life of Manila Bay and its environs.”

Claudio Bravo, the late Chilean artist who recently held a retrospective show of his Philippine portraits, is represented by a hyperrealist still life of pebbles titled “Piedras.” In Bravo’s superb hands, inanimate objects assume an intense life of their own, seemingly more real than in actual existence.

National Artist J. Elizalde Navarro, whose sojourn to the Indonesian island of Bali ignited a ferociously chromatic ebullience, amplified by the flamboyance of the people’s richly colorful garments, goes in reverse gear by depicting a disrobed Mother and Child, more noble in their state of undress. 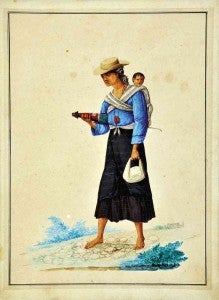 National Artist Fernando Amorsolo is no doubt the perennial presence in any Philippine auction. His works are like talismanic magnets to collectors. To be offered is a work titled “Sabungeros,” depicting a typical town cockfight.

The centerpiece of the auction is a work by the country’s greatest muralist, National Artist Carlos “Botong” Francisco, whose masterworks rarely appear on the market. The painting is the “Second Station of the Cross: Jesus Accepts His Cross,” part of the complete series that was unfortunately dispersed into several private collections.

The fortuitous emergence of this particular work gives incontestable credence to all the artist’s aesthetic virtues and superlative technical skills.

Works of over 70 artists have been assembled by Leon Gallery, ranging widely across varied idioms, movements and styles.