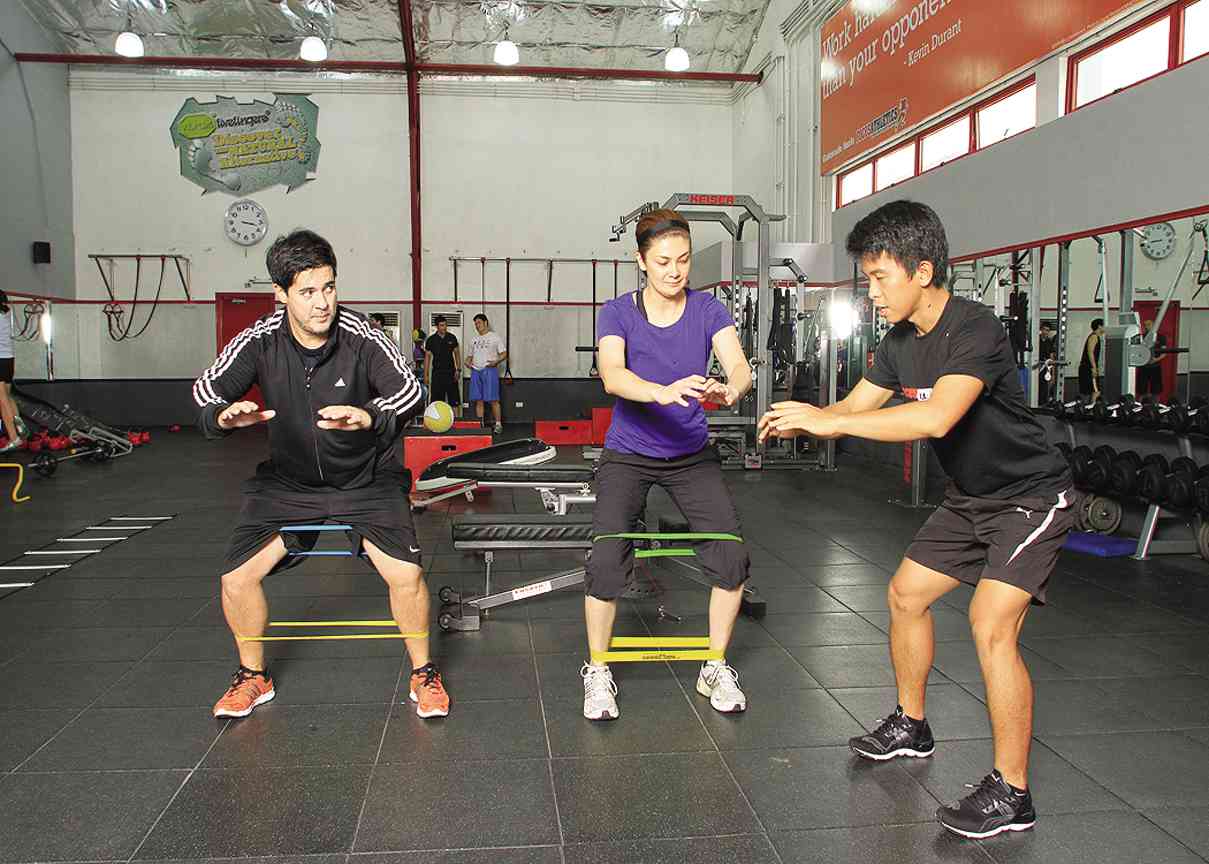 AGA AND Charlene Muhlach on their first day, working out with resistance bands for the thighs and gluteal muscles.

What Aga Muhlach, Anne Curtis, Iza Calzado are trying out these days

A package of P8,000 for an unlimited number of personal training sessions in a month is good deal. But that’s not the only reason professional and collegiate athletes, weekend warriors, and celebrities are flocking to Focus Athletics.

Like Moro Lorenzo Sports Center in Loyola Heights, Quezon City, it offers a comprehensive program in improving performance and rehabilitation.

For injured athletes, the rehab program examines the weaknesses and other factors that contributed to the injury.

It all began when Paolo Cabalfin, a former model, events organizer and host, tore an adductor and hamstring from playing basketball. He went to Moro Lorenzo at Ateneo for recovery and retraining his muscles.

“I fell in love with the training. There was nothing like this in Makati,” says Cabalfin.

When Focus Athletics opened last year, the program attracted pros and collegiate athletes. By word of mouth, non-athletes joined the program to lose weight or to get fit.

Meanwhile, Cabalfin keeps fit while working at the same time. “I want to get stronger since I’m no longer worrying about injuries. I’m surrounded by performance coaches and physical therapists daily, so they see my progress. That is the relationship that I want for all my clients. There is one full team behind one client.”

Clients with injuries need to show their medical assessment from their doctor. The performance coach and the physical therapist collaborate to help the client. The rehab programs look for the root of the problem. Usually, the pain or injury is just a symptom of a malfunction or misalignment coming from another part of the body.

Athletes such as Sean Anthony of Barako Bull Energy Cola in the Philippine Basketball Association (PBA) have benefited from the program. Before the opening, he road-tested the equipment and the program which includes functional strength training (strength exercises to transfer to other movements).

“In basketball, I’m not bench pressing or doing bicep curls. I’m jumping and running. That is what we do here. We do simulations of quick hops in basketball to change of direction, rather than just squats and lunges. It’s taking what you do in a basketball court, breaking down the movement and strengthening the muscles so you perform faster and better,” he says.

Anthony underwent a similar program at API under Tim Grover, Michael Jordan’s personal trainer. “When I came back, I tried to find a similar place. My trainer Julio Veloso is the head trainer here,” says Anthony.

The basketball player’s goal was to condition himself for the coming PBA season. When he started at Focus Athletics, he observed that his jumps improved and he was more agile.

However, Achilles tendonitis (inflammation in the tendon) kept him out of the gym for a while.

When he returned to Focus Athletics, he underwent a comprehensive rehabilitation program. “After an injury, ice, heat packs and stretching are the usual remedies. Here I underwent soft tissue mobilization,” he says.

After a medical assessment, analysis and soft tissue mobilization (stroking, compression and stretches that normalize the function of the tissues), Anthony learned that it wasn’t just the strain on his legs that was causing the tendonitis, but also the tightness in hips and gluteal muscles and skeletal misalignment. “The misalignment in my back caused problems when I ran. This put a strain on my Achilles tendon. The program here finds the source,” he says.

“They would work on mobilizing all the stiff parts that caused the pain. I wasn’t doing weights, running or jumping. I was doing stretching and isometric exercises to strengthen the hips. We slowly built up the strength. Now we are into the power phase, getting into the full-on agility. I’ve been working my way back up to full speed,” he explains.

The Focus Athletics team also evaluates how Anthony plays. “They notice that when I land from a jump, one side of the hip dips. The next day they fix it, they talk with Julio (Veloso),” he notes.

His physical therapist and trainers work harmoniously to find the protocol and methods to address that.

Anthony likes to make collages on Facebook of his workouts. He shows photos of squats, calf raises, core workouts on the Swiss ball, medicine ball throws, lunges with weights, jump squats with wings on the back and pressurized resistance equipment—all of which garner “likes” from legions of friends.

“I am here four days a week. On Monday, it will be weights and therapy, medicine ball, core work and functional work. Tuesday is a full program of soft tissue work. For Thursday and Friday it’s weight resistance and therapy,” he says.

Between the athlete’s workouts, he takes vinyasa yoga as a breather: “I don’t want to do anything with power. It’s just a class to stretch and relax.”

As word got around about Focus Athletics program, celebrities such as Iza Calzado started signing up.

“It’s nice to have them here. They validate our training program. Women love the core and butt workouts. Focus Athletics is for everyone. We tweak the sports science to give the best training system for you,” says Cabalfin.

On the day of the interview with Inquirer Lifestyle, Anthony and Cabalfin, actor Aga Muhlach and his wife, former beauty queen Charlene Gonzales, are on their first day of training.

“I used to lift weights but I stopped. For my age, I want to be agile so I can play basketball and do wakeboarding again,” says Muhlach. He learned about Focus Athletics from friends and was impressed by the YouTube presentation of football and basketball players swearing by the program.

“I like the change of atmosphere,” he says, and admits that it was his first time to do core training. The sweat-soaked actor promises to give us another interview after he reaches his goal in three months.

In a separate interview, actress Anne Curtis signed up to get toned for her concert in Los Angeles. “I needed a one-on-one intense training to get back to the build I had a year ago. I got lazy to work out,” she says with a giggle. “I showed my picture of how I looked in my concert (at Araneta Coliseum.) This was the peg. They said it was doable.”

Every day at 9 a.m. for 90 minutes, Curtis was in workout mode. She described her fitness program as a combination of Crossfit, circuit training and plyometrics. “It’s like I want to die every day,” she says.

As soon as her muscles adapted to the exercises, her coach would increase the intensity.

Accustomed to her soft muscles, male colleagues at “Showtime” started to notice the striations and the firm muscles.

“When you see yourself getting toned, you get more inspired,” she says.