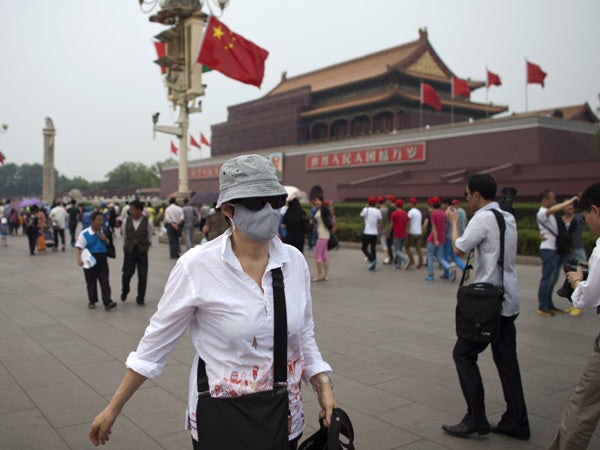 A foreign tourist wears a mask in front of Tiananmen Gate on a polluted day in Beijing, China. Like its physical environment, China is suffocating the literary landscape by imposing censorship on foreign titles. AP

WASHINGTON – Pregnant women who were exposed to high levels of air pollution were twice as likely to have a child with autism as women who lived in low pollution areas, a US study said on Tuesday.

According to experts at Harvard University, the research is the first large national study to examine links between the prevalence of pollution and the development of the developmental disorder.

The findings are published in the journal Environmental Health Perspectives.

“Depending on the pollutant, 20 percent to 60 percent of the women in our study lived in areas where risk of autism was elevated,” she said.

To estimate exposure to pollutants while pregnant, they used air pollution data from the Environmental Protection Agency, and adjusted for factors like income, education, and smoking during pregnancy.

The analysis found that women who lived in locations with the highest levels of diesel particulates or mercury in the air were twice as likely to have a child with autism as those who lived in the areas with the lowest levels.

When the pollutants included lead, manganese, methylene chloride and combined metal exposure, women in areas with the highest levels of these pollutants were about 50 percent more likely to have a child with autism.

Autism is a brain disorder that affects as many as one in 88 in the United States, and about one in 100 in Britain.

Researchers said the findings suggest that metals and other pollutants should be regularly measured in the blood of pregnant women to give a better understanding of whether certain pollutants increase autism risk.