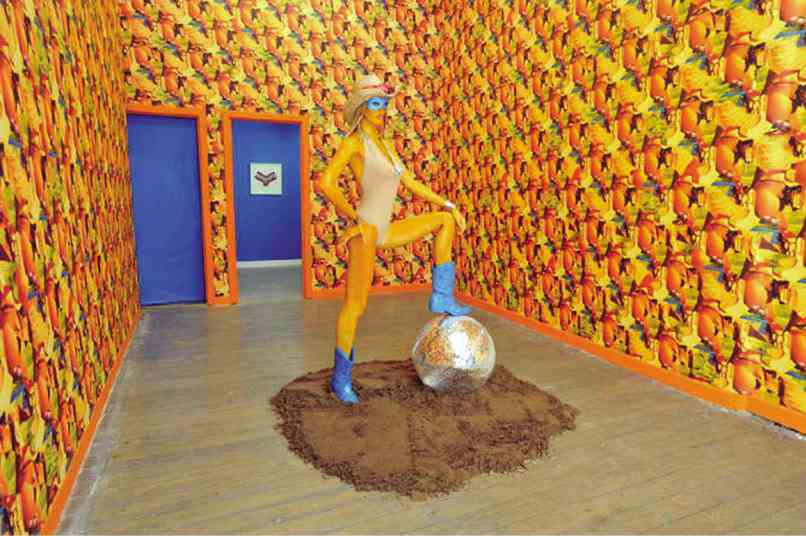 He processes thoughts through images, weaving visual narratives in imitation Hermès scarves, for instance, or locking in cultural history in a perfume bottle.

Filipino multimedia artist Pio Abad, among the emerging stars in the UK art scene, likes compressing large, complex ideas in the most banal objects. The extravagant lifestyle of Iraq dictator Saddam Hussein, for instance, as shown by gold-plated water taps that decked his palace, became the central motif of his imitation Versace silk scarf.

Abad’s uncanny ability to condense the profound into everyday objects has made his art accessible. Perhaps it is inevitable that politics and history find their way into his works.

The son of Budget Secretary Butch Abad and Batanes Rep. Dina Abad, he grew up listening to political discussions on the breakfast table.

But for the artist, who will turn 30 this year, it’s all about making narrative links in a visually expressive work—without becoming too preachy.

“I’ve always been a student of history,” he said. “I try to expand the [historical] connections, because one thing is never really autonomous. But I don’t want to be an activist. That’s not the position I want. I’m an artist. I’m more interested in the link between the artist and the archeologist.”

That sense of archeology is born out of his passion to make his art relevant. “Naghuhukay ako, excavating these stories and trying to find personal links to them,” Abad said.

His recently concluded one-man show at the Zabloduwicz Collection in Camden, London, where he was selected as one of six artists for its 2013 Invites Series, was inspired by his father’s 1989 visit to Pyongyang, North Korea. Secretary Abad was among the Philippine delegates to the 13th World Festival of Youth and Students, a quasi Olympics and cultural festival.

Abad found photographs of Pyongyang in his dad’s library. What started with a personal photograph expanded into architecture—Abad constructed a replica of sorts of Pyongyang’s controversial Ryugyong Hotel. The hotel, whose name means Capital of Willows but has since been nicknamed the “hotel of doom,” was constructed in 1987 with the grand ambition of becoming the world’s tallest tower. It remains unfinished.

“I didn’t plan to make a show about North Korea, but the exhibit opened when Pyongyang was making the headlines again,” he said. “I’ve had my dad’s photographs for quite a while. It’s about how personal photos can actually end up discussing larger things. There is no message there—that’s tricky because you have to let the viewers interpret the work—but it’s trying to find the relationship of that singular event to the rest of history.”

It was his aunt, the late artist Pacita Abad, who encouraged him to look for opportunities abroad. He had already been studying for a year-and-a-half at University of the Philippines Diliman when she gave him a list of schools to consider abroad. His aunt had been among his early mentors, giving him art lessons since he was a child. He recalls visiting his aunt to watch her paint.

“Maybe that’s why I don’t paint,” he said, laughing. He has big shoes to fill now that his aunt is gone.

After school he lived for three more years in Scotland, working in a studio by the railway tracks in the old industrial city. He was fortunate, he said, to have been in Scotland when the art scene was most vibrant. Glasgow was then like a DIY scene for the arts, where artists opened galleries everywhere— in warehouses, in the streets, even bedrooms were transformed into galleries.

Art, he said, is subjective, and that means graduating with top honors will not be so relevant in the real world. He was lucky, he insisted, that he graduated with a lot of support and interest in his work. So much interest, in fact, that his exhibit sold out, earning him the equivalent of P1.5 million in just one day.

He, however, remains level-headed—working every day, disciplining himself to keep a 9-5 schedule.

“There will always be a romantic view of the artist because of the nature of what we do, but at the end of the day, it’s work. And that’s a good way of keeping yourself level-headed,” he said.

He has also recently wrapped up an exhibit in Hong Kong titled, “Oh! Oh! Oh! (A Universal History of Iniquity),” at the Osage Gallery, as part of an exhibition called “Market Forces: A Friction of Opposites.”

A printed wallpaper he designed was inspired by a chandelier at the Philippine International Convention Center. It also showed perfume bottles with references to the Middle East, such as the camel, the Burj Al Arab and the Burj Khalifa.

“Like a lot the work I make, the piece brings together two different historical narratives that initially don’t seem related, but put in the same space, you begin to unpack the relationships that link them,” he said.

“For instance, the use of cultural spectacles, in this case architectural pieces de resistance, to mask harsher political realities and the role that individuals can play in manufacturing the representation of national cultures, whether they are authentic or not.”

Pio Abad’s next exhibit will be in October at Silverlens on Don Chino Roces Avenue (Pasong Tamo), Makati City. He will also return to Manila to do projects for a grant program from Deutsche Bank.