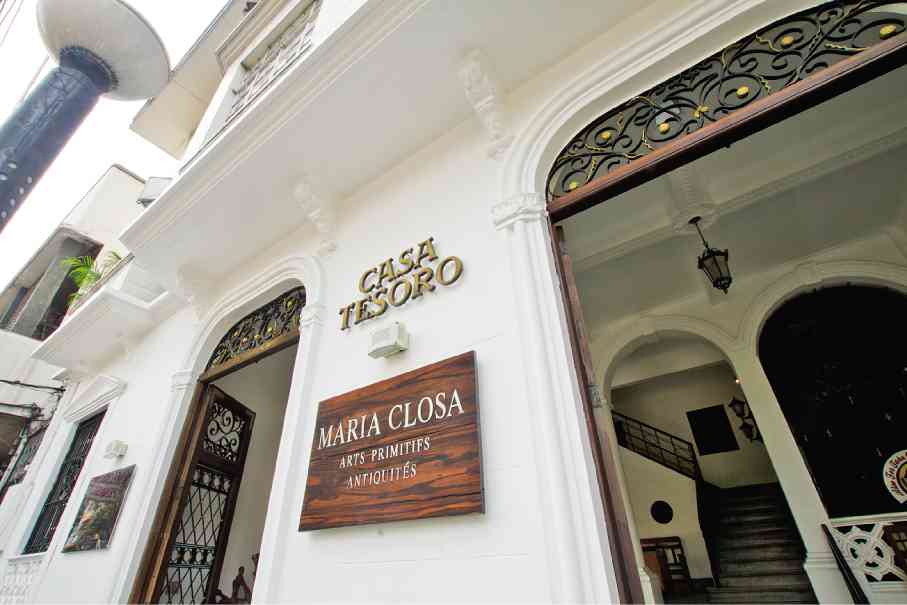 RESURRECTED The old mansion now functions solely as a tribal art and antiquities showroom and a contemporary art space.

Casa Tesoro was a stately home on A. Mabini Street in Ermita when the district and its surrounding arrabales like Malate were enclaves of landed gentry with second homes. The mansion was built as a vacation house and once marked a whole neighborhood’s genteel and patrician identity.

Founded in the late 16th century, the district called Ermita, after the Spanish word for hermitage, was a secluded place. The Ermita church was where an image of the Nuestra Señora de Guia (Our Lady of Guidance) was kept.

During the American colonial period, Ermita was the university belt, where the campuses and dormitories of the University of the Philippines, Ateneo de Manila, Adamson University, Assumption College and St. Paul College were located.

The residential section of Ermita was populated by Americans who set up exclusive establishments such as the Army and Navy Club and University Club. During the 1945 Battle of Manila, Ermita was the scene of some of the most horrific massacres that occurred during World War II.

Casa Tesoro was built in 1901 and witnessed enough of these fateful events for it to become a historic structure with intrinsic architectural value for future generations. It had gone from stately vacation home to wartime army headquarters to postal station, and many other functions that changed its original fabric.

Ironically, by the ’70s, Ermita, the place of seclusion and retreat, had gained notoriety as a red-light district with a heavy concentration of girlie bars on Mabini and MH del Pilar Streets. Then, in the mid-’90s, in a major move to sanitize the notorious district, a new mayor closed down all the massage parlors and girlie bars in the area.

The main streets of Ermita were left with padlocked establishments and tourists looking for Philippine crafts and souvenirs to take home.

Ermita remained a place where all the antique and curio shops could be found, wedged in between music bars and pubs that had survived the mayor’s purge.

Around this time in 1995, tribal art and antiques dealer Maria Closa moved into Casa Tesoro, setting up shop on the second floor. Shortly after, the rest of the spaces on the ground floor were rented out to smaller antique dealers displaced when Chateau Marie, the old Zobel Mansion facing Manila Bay, was torn down to make way for a 52-story condominium.

The years 2008 to 2010 were hard times for the antique dealers. The market suffered a slump and slowly, one by one, the displaced Chateau Marie dealers moved out of Casa Tesoro.

Maria, together with old friend and collaborator Rudolph Kratochwill, an art collector and gallery owner from Austria, decided to stay behind. Just when everything else around them seemed to be in transition, Maria dusted her shelves and rode the shifting tides of a finicky and sluggish antiques market.

As the character of the neighborhood changed, so did the mansion’s uses. Casa Tesoro had lost its charm and now housed businesses such as a spa, a nightclub, a restaurant, money changers, an employment agency and a bar. It had become untidy.

By 2012, even these establishments had left Casa Tesoro. Again, no one except Maria and Rudolph stayed behind. If only to sustain the viability of the old mansion as a landmark, they decided to stay put. After negotiating with her longtime landlord to take over the rest of the vacated spaces—now comprising four units spread out on the ground floor, second floor and third floor—Maria and Rudolph got to work.

Together, they reorganized the vacated spaces in Casa Tesoro and brought them back to life. The empty rooms became springboards for their enthusiasm and creativity to sustain the old mansion.

Although no structural upgrading was done, they freshened up the interiors with better lighting and, along with the façade, a new coat of paint. Casa Tesoro now functions as a tribal art and antiquities showroom that carries outstanding sculptures, textiles, ritual objects and accessories from the Cordilleras.

The showrooms of Maria Closa and BAR have transformed the old mansion, bringing back some of its old charm with new iconoclastic paintings and artworks by Manuel Ocampo and Jayson Oliveria. Clearly, with adaptive reuse, the mansion has been given a new lease on life—and a new flavor for the times we live in.