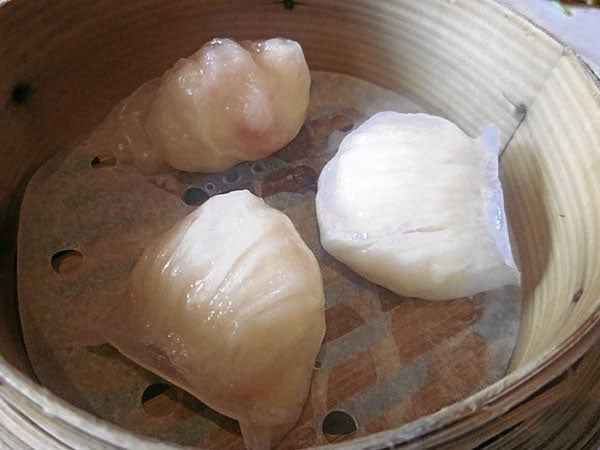 You won’t find siopao in the weekend dimsum menu of Mandarin Oriental’s Tin Hau Restaurant. Instead you’ll see it listed under the more refined name of “steamed barbecued buns.”

On the other hand, siomai, the Chinese dumpling so familiar and loved by Filipinos, though listed, comes with a longer description: steamed dumplings siomai topped with baby abalone.

Perhaps that’s only to be expected in a restaurant where the wait staff is dressed in crisp, impeccable uniforms and the dinnerware includes soup spoons made of Rosenthal bone china.

As Chinese restaurants go, Tin Hau ups the ante with its ambience of quiet reserve and understated décor. Opulence is limited to the silky magenta tablecloth and the Chinese lanterns hanging by the ceiling. In everything else, there is restraint, the kind that brings about a feeling of refinement.

So it is with the weekend yum cha lunch. Instead of serving a buffet, Tin Hau offers a menu of 12 different kinds of dimsum, from which diners can pick six of their favorites.

Along with this comes a sumptuous six-course meal that includes appetizers, soup and a duo of desserts.

All of these are then patiently brought, one by one, fresh from the kitchen to the table. It’s certainly a more elegant way of eating dimsum (or yum cha as it’s also called) for a reasonably set price of P1,080 (net) per person.

Our choice during a recent Sunday lunch included the aforementioned steamed barbecued pork buns and siomai. Both were served in bamboo baskets set over gleaming white bone china, with the smoke billowing out of the baskets like a signature from the kitchen.

The buns were bursting with the barbecued pork filling that, in more banal terms, would be known as asado-finely diced pork in a sweet, sticky sauce. The siomai of ground pork was taut with flavor and, as promised on the menu, was bestowed with bits of abalone on top.

Another kind of dumpling we had was the hakao, which had pink, tenderly steamed shrimps curled inside the translucent wrappers.

I thought the scallops and chives samosa would have an Indian flavor, given the name. However, since serving Indian cuisine in a Chinese restaurant would be incongruous, the crisp, deep-fried triangles encasing the fat scallops still maintained their allegiance to the flavors of Mandarin cooking.

Since I’m not much for rice porridge, the congee we ordered was more for my dining companions. It looked rather bland, I thought, but my companions said it was very tasty and was made even more so when tossed with the armada of flavor enhancers that came with it: bits of fried garlic, diced scallions, pounded ginger, slivers of century egg and baby shrimps.

What I found tantalizing were the shrimp balls encased in a crust studded with crisp, perfectly browned bread cubes. Although the menu described the filling as shrimp mousse, the shrimps were, thankfully, not blended into a smooth paste but were chopped just coarsely enough as to still have the texture and distinctive taste of shrimps.

Cuddled in the midst of the shrimps was a golden yolk of salted egg, its saltiness adding a necessary flavor contrast to the shrimps and the crust.

All these were served aside from the appetizer of roasted Peking duck in mandarin rolls; strips of gelatinous, marinated jelly fish; a soup course (we substituted asparagus corn soup for the braised shark’s fin soup); and the spicy wok-fried radish cake spiked with XO sauce.

Quite outstanding was the dish of soft-shell crabs. You won’t really recognize the crabs anymore because they’ve been chopped up, battered and fried. Still, it was very gratifying to eat crabs—flesh, shells and all—in their altered state and without having to peel them tediously. The generous sprinkling of crunchy cereal that blanketed the plate sweetened the taste of the just molted crabs even further.

Desserts were the standard chilled almond jelly with lychees, and steamed buns filled with a sweet red bean paste. But again, raising the bar a little, the kitchen served the almond jelly not in tiny cubes as others usually do, but in thick, hefty slabs. They were encircled by what looked like choice harvests of lychees and dotted by a large maraschino cherry—all of them immersed in an inviting pool of clear, sweet syrup.

Although there were plenty of customers in the restaurant, we didn’t feel the least bit rushed or crowded. With the tables properly distanced, each group had its own space, making relaxed dining and convivial conversation possible. Which all adds up.

After all, a place that gives common food more respectable names can likewise be counted on to provide the matching ambiance with which to enjoy its servings of dainty, delicate dimsum.