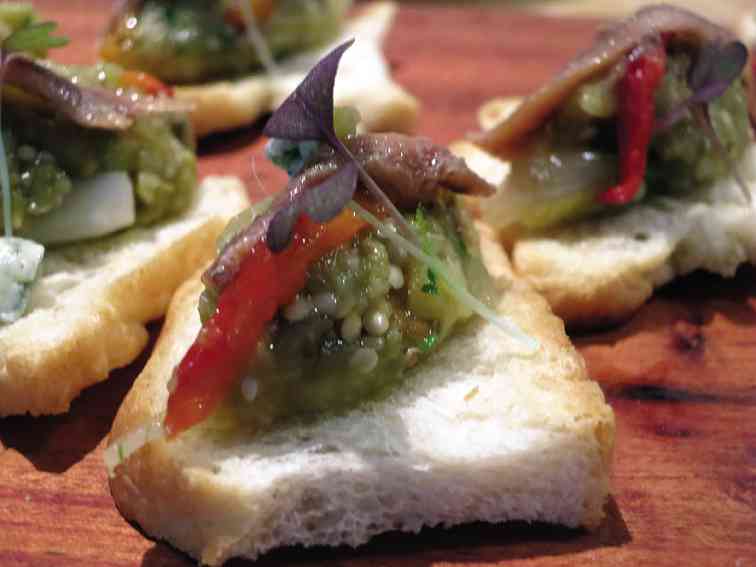 But precisely because of its simplicity, it’s important to use good-quality ingredients when preparing Spanish dishes, whether it’s for a main dish like paella, a soup like gazpacho, or for one of the tapas that Spain is famous for.

Which is why for the dinner buffet at Marriott Café, the hotel has brought in special ingredients from Spain. For cooking the paella, for instance, only “bomba” rice is used. Considered the best rice for paella, bomba has fat, stubby grains that absorb more of the cooking liquid, thus imbuing the paella with a richer flavor.

For the escalivada, only jerez de vinaigre, or sherry vinegar, will do, he says, sherry being originally made in the town of Jerez, in Spain’s Andalusia region.

Adding authenticity to Marriott’s Spanish food fest are the cheeses, hams and sausages, such as Manchego cheese, chorizo and jamon Serrano, ham that’s dry-cured and air-dried (traditionally in the Spanish mountains but now also in climate-controlled sheds).

A native of Valladolid, Burgos is also doing on-the-spot cooking of churros during the dinner buffet. Though it’s served as a dessert at Marriott Café, in Spain, these crispy fritters are more of a breakfast dish, he says.

Here’s a recipe for one of the delightful tapas being served during the Gastronomia de España: coca con escalivada (roasted vegetables on toast).

Even those not overly fond of vegetables will find this tapa appealing—roasting caramelizes the onions, eggplants and bell peppers, leaving them with a sweet and mellow flavor. This tapa is great served with sangria and Spanish wines such as Rioja and Cava.

Gastronomia de España is part of the dinner buffet of Café Marriott until June 30. Buffet price is P1,950 per person from Sunday to Thursday and P2,300 on Friday and Saturday.

Preheat the oven to 350°F (175°-180°C). Cut the onions in halves but leave the skin on. Slice the eggplants in halves. Arrange the onions, eggplants and bell peppers in an oven-proof tray lined with baking paper or aluminum foil. Roast the vegetables in the preheated oven for around 45 minutes or until tender.

Note: While vegetables are roasting, turn the bell peppers occasionally so that they roast evenly.

Peel off the skin from the onions and the eggplants. Dice the onions and slice the eggplants into bite-size pieces. Mix the onions, eggplants and bell pepper strips in a bowl. Combine olive oil and sherry vinegar in a separate bowl and season with salt and pepper. Brush the vegetables with this mixture.

Keeping the roasted peppers in a covered bowl for a few minutes makes it easier to peel off the skin.

Since the anchovies are salty, season the vegetables with salt only lightly.

If desired you can keep the anchovies whole, or mash them before putting them on the bread.

Other types of bread you may use: ciabatta, sandwich bread (trim off the crusts) and melba toast.

Chef Victor Burgos says it’s important to use sherry vinegar for the dressing to keep the taste authentically Spanish. Likewise Spanish extra-virgin olive oil is a must.