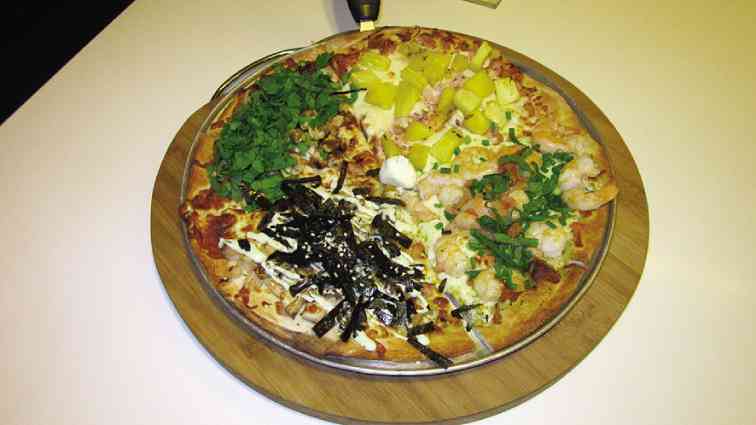 JAPANESE pizza with many toppings

This pizza is found only in Canada–and now in PH

There’s this chap from Britain, Gordon Ramsay, a superchef who went on to create the fanciest and most expensive pizza in the world, loaded with caviar, lobster etc. And he made it to the Guinness Book of World Records. And there he reigned for some time.

Not so fast. Now comes Nader Hatami from Canada (originally from Israel), another chef of chefs, who outdid Ramsay, using the same ingredients and more of his own choice. And he dislodged the Briton from the top spot in the Guinness as far as pizza is concerned. Check it out at google.com stevestonpizzaguiness.

Hatami is the president of Steveston Pizza, named after a village in Richmond, Canada. He seems to be conservative, or at least choosy in expanding operations abroad. After all, there are only three Steveston Pizza branches in Canada and none abroad—until now.

ph). This was made possible through investors who are Filipino-Canadians.

Franchise holder is Paolo Tan and the GM is Jeffrey C. Yupitum.

“Not just anybody can be an investor,” Yupitum points out. “Kailangan they have to take care of the name [of the company].”

So what makes Steveston pizzas so special?

“The ingredients are all fresh and of topnotch quality,” boasts Tan. “The dough is fluffy and chewy. I believe that we are the only pizza in which the toppings are loaded.”

With that, some succulent pizza samplers were brought in for the delectation of the media persons present. Well, I’m not a gourmet. I just love to eat, so I think the columnists in this section will be in a better position to describe the products if ever they get to sample these.

There are the pizzas by “nationality,” as in Japanese, Mexican, Hawaiian, Italian and the intriguingly titled “Caveman.” The 12-inch, family-size Japanese Pizza has seaweed, chicken and wasabi dressing. The Black Pizza oozes with honey, walnuts, glazed chicken and mousse. The Green Pizza is loaded with prawns, fresh brie cheese and herb pesto butter.

Then there are the “C” signature pizzas, the specialties of the house. C-1 is groaning with tiger prawns, crab meat, essence of pernod, tomatoes and fennel salsa. C-2 is top-heavy with prosciutto ham, brie cheese, semi-dried tomatoes and roasted garlic mousse.

“We plan to add more signature pizzas in the future,” says Tan.

“People complain we are expensive but the price was set by Canada and you get value for money,” points out Yupitum. “This is the result of all the hard work and experimentation, and we have more plans for the Asian market.”