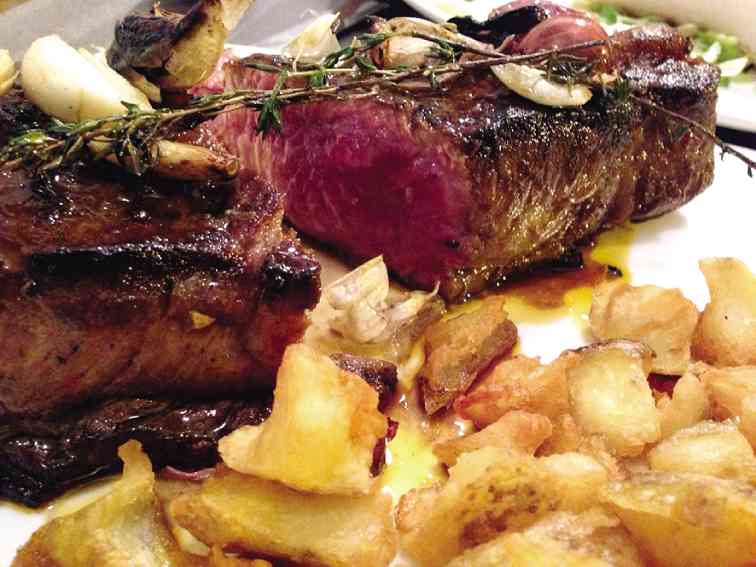 No gimmicks, no concepts–but great steaks and more, y’all

This place took some finding. Not even the Internet, which is usually quite good at these things, could throw up an address for me, much less a phone number. I heard about it from a work colleague who posted a mouth-watering picture of a steak with the cryptic caption: “Stockton Place, y’all.”

Which is why when we finally stumbled upon it, a welcome beacon of clean well-lit interiors with only a chalkboard sign to mark its existence on Salcedo Street, we were surprised to find that it was full.

Well, actually, it was empty, save for one couple eating awkwardly perched at the bar, but it was fully booked. We were gently but firmly turned away, but as we were deliberating where to go next, the chef had apparently taken pity on us and the waitress asked us if we would be willing to sit outside.

What’s so special about Stockton Place, anyway? Nothing at all. And that’s what makes it so special.

There are no gimmicks, no concepts, no waiters on roller-skates. It’s not a foreign chain, it’s not riding on the back of a fad. It’s a cosy, well-lighted space with clean lines and cream textures.

The menu is short, to the point, and comprehensively interesting without the sense of anything being there as filler. It has the tentatively unassuming feel of a first restaurant, which turned out to be the case; it opened a few weeks ago with Celine de los Angeles, who had been last seen working at The Goose Station, in the kitchen.

Everyone who has posted pictures of the place seems to have had the steak, and since it was the night before Father’s Day it seemed that a large, manly slab of meat was in order, even though as a modern male I try to avoid stereotype and desist from ordering steak in restaurants.

But since we were halfway there anyway, my wife decided to have the fish. We shared a salad as a starter, with liberal smudges of peanut butter and strewn with curls of shaved foie gras mousse. It was excellent.

The mains were generous to a fault. Unlike many “for sharing” portions that would be hard-pressed to feed a single anorexic, much less a pair, the steak was genuinely, alarmingly large, a thick slab of meat salted and seared, bloody but evenly cooked all throughout, which many restaurants, even steak restaurants, fail to do properly without resorting to some sort of sous-vide sorcery.

It was accompanied by the best fried potatoes I have had in my life, crunchy and addictive as Cheetos. My wife’s fish was also a very un-girly and substantial strip of sole with a croustillant strip atop and a hot salad of vegetables and nut slivers underneath, with a decorative smear of hollandaise.

With the desserts, the inventiveness seemed to be somewhat foiled by the execution: The lemon tart was a little stodgy and the meringue discs had wilted in the humidity and were reduced to a gummy mass.

But perhaps I’m nitpicking, and perhaps I shouldn’t have greedily ordered dessert when my shirt buttons were stretched out and ready to pop. It is difficult to be completely objective after one putting oneself around a substantial portion of nearly-raw cow. I was actually so hard-pressed to find a false note in the food and the service that I scribbled “Drinks coasters slightly uneven” in my notes.

There’s always a reluctance to heap tons of praise on a new restaurant because it can collapse under the expectations; and an unmitigatedly glowing recommendation doesn’t leave room for growth. Nor does it need the publicity, judging from the number of people who were turned away that night.

Yet I promise I don’t mean to be condescending when I say that Ms De los Angeles, who is finally at the helm of a restaurant for the first time, now has the opportunity to find her voice as

a chef, and I hope that the chalkboard menu is not a design quirk but rather a signal that the restaurant’s offerings will change continuously.

It could become sloppy and repetitive and go from being the hottest new place to echoing, deserted bankruptcy in less than a year. Or it might go from strength to strength and become that rarest of beasts: the restaurant that’s always full, always interesting, and always good.

Ms De los Angeles has set herself an opening flourish that sets up great expectations. In the meantime, I can only echo my friend’s enjoinder: Stockton Place, y’all.