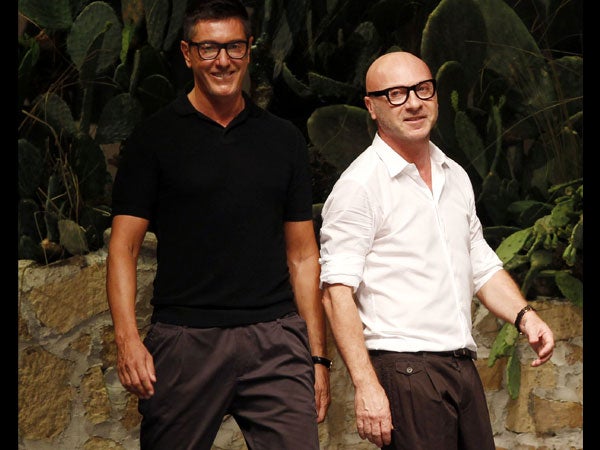 FILE -- In this file photo taken on June 23, 2012, Italian fashion designers Stefano Gabbana, left, and Domenico Dolce take the catwalk after presenting their Dolce & Gabbana fashion collection in Milan, Italy. A Milan court convicted fashion designers Domenico Dolce and Stefano Gabbana of tax evasion. The pair were found guilty Wednesday of failing to declare euros 1 billion ($1.3 billion) in income to authorities. The court sentenced them both to one year and eight months in jail. Prosecutors argued that the pair had evaded taxes on income of 416 million euros each and 200 million euros through a Luxembourg-based company. The statute of limitations ran out on a charge of misrepresenting income. (AP Photo/Luca Bruno)

Dolce and Gabbana sentenced to jail for tax dodge

Lawyers for Dolce and Gabbana, whose celebrity clients include Beyonce and Madonna, immediately said they would appeal. Under Italian law the sentence will be suspended in the meantime.

The pair was accused of having transferred control of their brands to a shell company in Luxembourg in 2004 and 2005 to avoid paying Italian taxes.

Prosecutors had argued that setting up the Luxembourg company Gado — an acronym of the surnames of the two designers — while the company was operating out of Italy was a bid to defraud the state.

They had called in May for the pair to be sent down for two years and six months.

In her closing speech at the trial, prosecutor Laura Pedio said there was “rock-solid proof” that the duo had committed “sophisticated tax fraud”.

“Cases as complex as this one are the most insidious,” Pedio said, describing Gado as “a sort of cloud with the consistency of gas”.

Fellow prosecutor Gaetano Ruta said Gado was “an artificial construction the aim of which was to get a tax advantage”.

Although Dolce and Gabbana had originally been accused of tax evasion of around one billion euros, the court ruled that just 200 million euros of that sum was relevant.

Four other people, including Dolce’s brother Alfonso, were given suspended jail sentences.

Investigators completed a probe into the designers and five other people in 2010. The case was dismissed in April 2011 but reopened in November last year and went to trial.

“All that I care about is making clothes, that’s all. Let them do and say whatever they want,” Gabbana tweeted about the trial in April.

“To be accused of something that’s not true is not a pretty thing, but the heart of the matter is, who cares, we’ll all end up in the ground in the end,” he said.

Already in March, a civil court in Milan found the pair guilty of tax evasion and fined them 343 million euros. That ruling is currently subject to an appeal.

Italy has been cracking down on widespread tax evasion in an effort to raise government revenues following the global economic crisis.