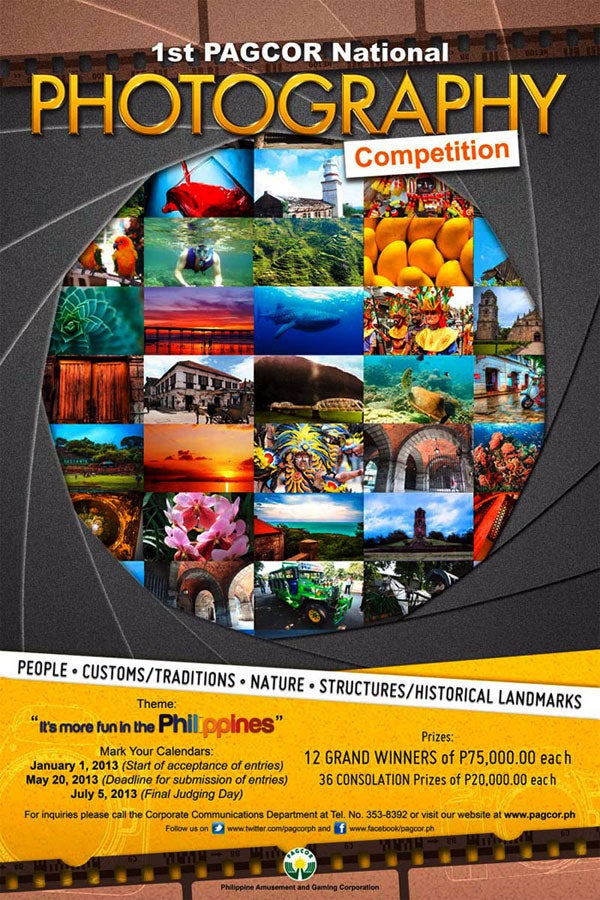 MANILA, Philippines—The Philippine Amusement and Gaming Corporation (Pagcor) has chosen 48 out of 5,500 entries as finalists for the agency’s 1st National Photography Competition on July 5   at the Airport Casino Filipino in Parañaque City.

All 48 photos that made it to the finals, Bautista said, will be exhibited from July 5 to 12, 2013 in Airport Casino Filipino  but only 12 grand winners—three from each category–people, nature, structures/historical landmarks/and customs and traditions—will be proclaimed on July 12.

The grand winners will win P75,000 each while the 36 non-winning entries will each receive a consolation prize of P20,000.
The winning entries, Bautista said, will  be used for Pagcor’s 2014 calendar.

She said Pagcor will have  a special award for the “Most Liked” photos, chosen via online voting.

“The contest for the ‘Most Liked’ photos is open to all Pagcor Facebook followers from June 20 to July 9, 2013. You can vote for your favorite photos by visiting our FB page,” she said.

The complete list of the 48 grand finalists to the 1st PAGCOR National Photography Competition can be viewed at the agency’s official website (www.pagcor.ph) and facebook page.

“We have entries from as far as Batanes, Isabela, Camiguin, Lanao del Norte and Zamboanga. The profile of participants is also diverse. There are students, professionals, photography hobbyists and experienced lensmen. The youngest participants are 18 years old and the oldest is 70 years old,” Bautista said.

“This is our way of helping promote the Philippines’ rare treasures, world-class tourist destinations, exciting culture and traditions. The event itself is a gratifying discovery of beautiful places in the country. We thank everyone who joined the competition,” she said.

Pagcor’s photo contest, Bautista said, showcased myriad breathtaking destinations all over the Philippines which have yet to be discovered. “

“There are so many beautiful places even in quaint provinces like the 1.7 kilometer old port of Silay City in Negros, the awe-inspiring landscapes of Sambawan Island in Eastern Visayas, Leyte’s Canigao Island, and rare rock formations in Kapurpurawan, Ilocos Norte and Basco, Batanes. This only shows how blessed we are to have so many extraordinary natural attractions in the country,” she said.

The regional judging of the entries from Luzon, Visayas, Mindanao and Metro Manila were held last June 3, 7, 10 and 14 at Airport Casino Filipino. The screening was handled by some of the country’s best photographers and visual artists referred to Pagcor by the Cultural Center of the Philippines (CCP).

Cinematographer and Urian Awardee Nap Jamir, who was one of the judges for the Visayas screening, said he had difficulty scoring the entries.

“There are a lot of exceptional photos out there that just end up being seen by the photographer’s circle of friends, or on Facebook. They need a wider audience and we are glad that Pagcor’s competition provided them that opportunity,” Jamir said.

Eduviges Huang, chairperson of the Federation of Philippine Photographers Foundation, said that despite her years of experience as a judge in various photo contests, she had a hard time judging the images submitted to Pagcor’s photography contest.

“There are a number of images that are taken in places that I have never visited yet. Ang gaganda nila. Apart from the popular tourist spots, there are still so many places in the country that need to be showcased and there is no better tool to do that other than photography,” Huang added.