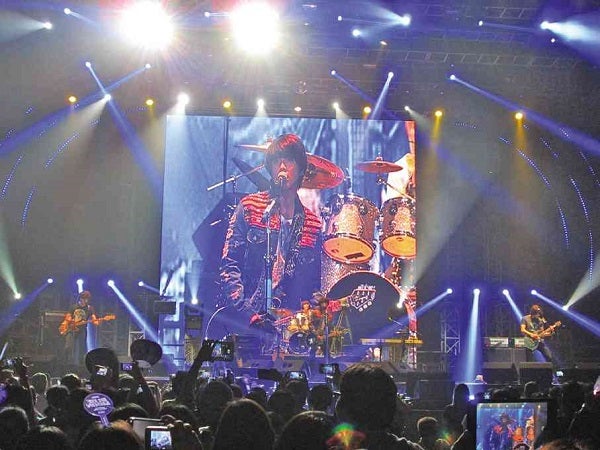 ONCE IN A “BLUE MOON.” CNBLUE brought its world tour to Manila,marking the first big K-pop rock concert in the country. ANGELA IGNACIO

What happens when a ‘Blue storm’ hits Manila

While the early monsoon rains were wreaking havoc all over the metro last week, a different kind of storm was brewing inside SM Megamall’s Event Center. It was more like a howling tornado, actually, in the form of flailing limbs and deafening shrieks. And, within the eye of that storm, was a group of cute South Korean idols in their early twenties.

Ugly weather notwithstanding, hordes of giddy tweens flocked to the venue just to catch a glimpse of pop-rock band CNBLUE. While some fans had come straight from class, others had most likely skipped school altogether and lined up outside the mall as early as 5 a.m. “Does your professor know you’re here?” Resident K-pop host Kring Elenzano wryly asked a fan in uniform, who guiltily ducked her head in response.

While waiting, the hosts distracted the antsy crowd with several games that held the promise of free concert tickets as prizes. All hell broke loose, however, as soon as the boys’ arrival was announced. Despite the hosts’ repeated pleas to stay calm for security purposes, the screaming went up several decibels as frontman Jung Yong-hwa, guitarist Lee Jong-hyun, bassist Lee Jung-shin, and drummer Kang Min-hyuk finally hopped onstage around 4 p.m. to formally meet their Filipino fans.

The foursome sat down for a short Q&amp;A session with radio DJ Jinri Park and reporter Gretchen Fullido, but the squealing drowned out most of the conversation. A far cry from his “Untouchable” persona, maknae (youngest member) Jungshin was the most talkative of the bunch, while Jonghyun was contented with smiling up at the fans that had gathered at the top floors. Crowd favorite Minhyuk spoke for the group when he said via an interpreter that he wants to visit Cebu. “And go fishing,” Jungshin added.

When asked which of their songs they would dedicate to their Pinoy fans, birthday boy Yonghwa suddenly burst into the chorus of “I’m Sorry,” the hit single off their fourth mini-album “Re:Blue.” The impromptu song effectively silenced the screaming crowd for a good two seconds, and for that, our eardrums were eternally grateful.

Although it was a strange song to choose for a dedication, Yonghwa’s stint actually turned out to be an omen of sorts, because he really did end up having something to be sorry for the next day. During the concert encore, he’d accidentally said “Singapore” in the middle of a song ad lib, and tried to cover it up by saying “I love you, Philippines!” The frontman was so mortified that he totally lost his momentum, whereupon a laughing Jungshin stepped in to sing his parts amid affectionate guffaws from the crowd.

Booboo aside, CNBLUE’s “Blue Moon” world tour was one K-pop extravaganza that Manila had never seen before, particularly because it was an actual rock concert and not the usual song-and-dance program. Amid a huge sea of Filipino and foreign BOICE waving blue lightsticks, the band performed 18 songs from their Korean and Japanese album releases, plus an encore mini-set that included the lighthearted soundtrack “You’ve Fallen for Me” from Yonghwa’s drama “Heartstrings.”

Opening with its chart-topping Japanese release “Where You Are,” CNBLUE dished out jaunty dancepop ditties that were somewhat reminiscent of Maroon 5’s early sound. Prime examples were “Hey You,” “I’m a Loner” from the band’s indie debut “Bluetory,” and “Intuition” from its first full-length album, “First Step.”

The stage setup was typical of a K-pop show—a dazzling interplay of colorful lights, LED panels and well-timed pyrotechnics—and it’s easy to be distracted by the fancy production. But as far as the thousands of fans were concerned, all eyes were on the idols, and for good reason.

Dressed in plain tees and jeans, the boys of CNBLUE were a refreshing change from the flashy outfits and cheesy choreos that K-pop is notorious for. This gave one the opportunity to focus on their talent, and for a relatively young band, they’re actually quite good.

As the night wore on, however, it became increasingly hard to ignore the fact that the guys were easy on the eyes, even with the simple getup. Let’s face it, there’s something inherently sexy about the way their carefully styled K-pop bangs fall into their eyes as they bend over their instruments.

The audience would squeal every time Minhyuk’s “lovely” profile flashed onscreen—no surprise there, considering what a complete joy it was to watch his facial expressions change while he worked the drums. Meanwhile, the cameras would often zoom in on Jonghyun’s nimble fingers (and bedimpled cheek, to the delight of fangirls) as he dished out burning riffs during his solo bits, probably to show the crowd that the guy’s got skills as well as looks.

In between vocal duties, Yonghwa melted ladies’ hearts with his other talents, like playing the piano for the heartrending English B-side track “Feeling,” and even doing some beatboxing during the encore. His dance moves, however, are a different matter entirely, even as he claimed that he was the best dancer among the four.

Apart from the “ear fun” that their Korean/English pop-rock repertoire provided, we had to laud the boys’ valiant efforts in learning some English and Filipino phrases, with Jungshin apparently being the most “fluent.” “Masaya na ba kayo? Me, too,” he said confidently, and the crowd roared. Minhyuk started rambling about lechon and jeepneys, which was all we could make out from his speech, but it mattered little to the swooning teens.

Other funny, endearing moments included the bit where the other three tried to tell the audience in broken Tagalog to sing “Happy Birthday” to Yonghwa (who turns 24 today), and the part where Jungshin and Yonghwa tried to get their side of the crowd to put their “hands up right/left,” which took several attempts before everyone understood what the boys wanted them to do.

All in all, CNBLUE’s Manila show was an enjoyable experience, full of likable tunes and funny, memorable moments. If it’s one thing we’ve learned from jumping in the hallyu bandwagon, it’s not to underestimate the lengths K-pop fans would go to just to see their idols in person, nor doubt the capacity of these heartthrobs to put on a rocking show. And that they definitely did.

Many would argue that CNBLUE is different, that it’s not entirely K-pop. That may be, but the overwhelming adulation they get from fans, as well as the idols’ dedication to making their fans happy, is undoubtedly a trademark of this genre that seems hell bent on taking over the world, one screaming teen at a time.