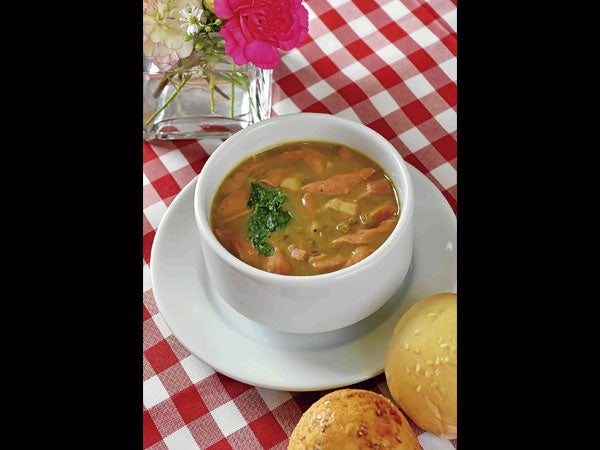 Integrating cold cuts in a seven-course fine-dining meal, from appetizer to dessert, was the challenge for chef Jessie Sincioco, who has become known for favorites at Le Soufflé (now Chef Jessie) such as Alugbati Salad and Duck Confit Adobo. Ginisang monggo with cheese franks and a dessert topped with salami strips? Why not?

“I cook French, Spanish, Italian, but this is the first time [I have] to work with so many cold cuts!” she said. Sincioco teamed up with celebrities to make “gourmet deli dishes” using Purefoods Premium Franks and Cold Cuts.

The deli line, which includes beef, turkey, German and cheese franks, salami, spiced ham and bologna, was recently launched at Chef Jessie Restaurant at Rockwell Club, Makati. The results were interesting, a mix of European and Filipino flavors.

But first, know the proper way to cook your favorite franks. Boiling in water makes it soggy, and frying in oil makes the skin wrinkle.

Purefoods category manager Mira Calaranan said the best way to cook the franks and to keep them firm and juicy is to boil in a little water with some oil. Same goes for cooking the classic Purefood Tender Juicy hotdogs.

Inquirer Lifestyle beauty columnist and bride-to-be Kelly Misa prepared Purefoods Spicy Ham Wraps in Tamarind Vinaigrette Dressing, a light snack which could also serve as a salad. It was a “fan” made out of leaves of romaine lettuce, arugula or red cabbage, wrapped with a slice of spicy ham to form a cone.

Blanched chives tied it in place.

It is topped with melon strips and mandarin slices, and drizzled with tamarind-vinaigrette dressing. This sweet-tangy treatment countered the saltiness of the salami.

The surprise of the day was the Purefoods Cheese Franks Monggo Soup with Malunggay, by mom of five and TV host Christine Jacob-Sandejas. Who would have thought that cheese franks would go well with monggo, which is usually cooked with tinapa, chicharon or chopped pork?

Jacob-Sandejas said her soup was not typical, but it worked. Her inspiration was the linsen suppe, a German lentil soup with frankfurters. The soup was rich and creamy; the

malunggay leaves made it healthy.

Inquirer columnist and interior designer Tessa Prieto-Valdes introduced a quick pasta dish. Her Purefoods Salami Linguine Al Pesto is al dente linguine tossed in a light sauce made from sautéed salami in garlic, onion and fresh pesto, then topped with grated parmesan and a sprig of basil. Flavorful and filling, it is something you can do in minutes.

Chef Sincioco is popular for her delectable souffles. She served a simple dessert—Baked Fruit Tart, but topped it with Crispy Bologna Vermicelli or crunchy bologna strips.

“Desserts are not only sweet. In cheesecakes, the base is little salty; in pies, the crust is salty. It was my first time to use meat in a dessert and the fried bologna balances off the sweetness of the tart.”

Calaranan said the Premium Line is geared toward the younger set who want “real food” minus tedious cooking.

“You can store them in the fridge and cook them as ulam or, as we have showed here, as easy-to-do comfort food.”