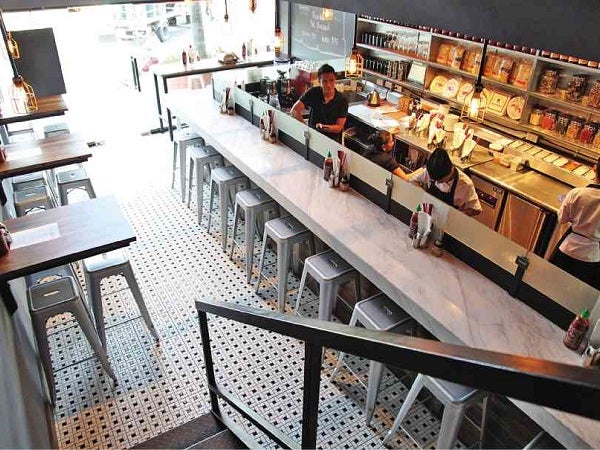 If, like us, you live to eat, you probably frequent the Condé Nast award-winning Abacá Restaurant in Mactan and A Café and Maya Mexican Restaurant and Tequila Lounge in the city.

Owned and operated by The Abaca Group’s brilliant chef-owner Jason Hyatt and his bubbly wife, Anna, these restaurants are recognized for being spaces that unmistakably celebrate the joy of eating. You walk out of their restaurants not only stuffed, but more importantly, contented, with a big, happy sigh—and what you hope is a subtle belly rub.

What the group is up to next we can never foretell.

Nobody saw a Mexican restaurant coming in 2009 or a breakfast café in 2011, and certainly nobody saw an Italian restaurant, Tavolata: la trattoria di abacá, and a Vietnamese noodle kitchen, Phat Pho, coming as additions to their burgeoning culinary empire.

Taking inspiration from the traditional Italian trattoria, Tavolata is not meant to be a posh, swanky space, although some may argue that it looks it. Rather, it’s a casual gathering place for friends and family over hearty food and delightful wine.

The sleek, mysterious façade of dark, tinted glass from floor to ceiling holds promise of an impeccably chic interior—seductively dim save for row upon row of incandescent light bulbs that descend from its high loft ceiling to the diners below.

Designed by Jason himself, the look is simple, cool and masculine—again, just like his other restaurants.

“I wanted to use the space as the décor, not the décor to define the space,” he says on the interiors. “Although Tavolata has the appearance of being a fine-dining restaurant, it is in fact quite approachable. It’s very straightforward. Tavolata is all about tasty, simple, value-oriented food.”

Tavolata means “gathering around a table,” and that is exactly what Jason wants you to do—celebrate one of life’s biggest joys: a nourishing meal cooked well.

Often in the kitchen himself with his two other chefs, Aussies Wade Watson and Patrick McCarthy, Jason says much of the menu is handcrafted using the finest ingredients imported from Italy, including all cured meats, olives, semolina for the pasta, San Marzano tomatoes, pizza flour and all cheeses, even the pizza cheese.

The pasta is made fresh daily from 100-percent semolina flown from Italy, using the resto’s own bronze die extruder. Those who profess to love pasta don’t fully know just how much of it is to love until they’ve tried Tavolata’s freshly extruded, bronze cut pasta.

The mushroom bucatini with prosciutto, truffle, mushrooms and cream is a godsend for the palate, as is the oxtail pappardelle with tomatoes, parsley, parmesan and mushrooms.

The pizza, which many should deem the highlight at Tavolata, is completely hand-tossed (there are no rolling pins allowed inside this trattoria) and complemented by toppings like Italian spiced chicken, clams and octopus with scamorza, pancetta and Calabrian hot sausage.

The dough goes through a three-day fermentation process, resulting in a texture that is the delightful combination of crispy, airy and chewy all at once.

Aside from the best-selling pizzas and pastas, there’s the Milanese-style pork chop “cotoletta.” For lighter fare, the artichoke salad with beets, pecorino and hazelnuts is bursting with flavor.

Tavolata had barely turned a year old when The Abaca Group opened Phat Pho: a Vietnamese kitchen in April this year. The opening came quietly and with no fanfare, but the crowd flocked anyway.

For months, Cebu had speculated about what was hidden behind the newly boarded-up space in Crossroads Mall. The sign outside bore nothing save for the The Abaca Group logo, and that was enough to get more than a few people curious.

Like most successful endeavors, Phat Pho: a Vietnamese kitchen was opened to fulfill a need.

“We felt there was a huge gap in the market; the only restaurants serving Vietnamese also serve Thai, so we decided to focus on just one cuisine,” says Jason. “The concept is that of a simple noodle shop with quick service. It’s good food fast.”

Simple it may be, but it is not without a lot of wit. First, there’s the name. While rap songs might tell you that “Phat” stands for pretty, hot and tempting, The Abaca Group has put its own spin on the word. Its “Phat” means pretty, hot and tasty. The space is clever, too.

“I decided to keep it clean and urban,” says Jason. The interiors of Phat Pho are reminiscent of a hawker stall, albeit one with the chicest furniture and furnishings, from the black and white lattice-tiled floor to the exposed bulb lamps that hang from the ceiling.

The focal point is the marble countertop that runs the length of the L-shaped open kitchen where Jason and his crew are on rotation throughout the week. The countertop is also where most diners will gather, perched on steel bar stools. It’s not a space designed for lingering. The service is speedy and the turnover is fast and fuss-free, as Phat Pho doesn’t take any reservations.

But we all know it really boils down to food.

Phat Pho’s menu features classic Vietnamese flavors that are true to what The Abaca Group has become beloved for—simple and flavorful dishes made with the highest quality ingredients. Everything is handmade, and the sauces, toppings and broths are all crafted with care. The Abaca Group is adamant about not using artificial flavorings or powders, so the dishes in Phat Pho are all pretty healthy as Vietnamese cuisine is supposed to be.

Many of the dishes are surprisingly gluten-free, including the popular little dishes of beef carpaccio and satays with angus beef, chicken or pork belly options. The goi cuon (rice rolls) with slow roasted pork, chilled shrimp or marinated tofu are crowd favorites.

But if you’re looking for something more hearty, a bowl of pho (noodle soup) is the way to go. Take your pick from the pho bo, Phat Pho’s version of the classic Vietnamese beef soup with shaved US Angus beef, the pho ga (Vietnamese chicken noodle soup), or the unequivocal bestseller, the pho special with US angus beef, braised beef and tendon.

The banh mi, its version of the classic Vietnamese sandwich with pate, meatball, shaved ham and homemade cha lua (Vietnamese sausage) on crispy baguette, is also a must-try.

In the couple of months that Phat Pho has been open, the response has been “Way, way, way beyond our expectations,” says Jason.

Then comes the inevitable question, what’s next for The Abaca Group?

“We have a second Vietnamese chef coming in mid-June and three more Phat Phos this year,” says Jason, “as well as a Tavolata in Manila within the next 12 months.”

He probably won’t tell us where those next three Phat Phos or Tavolata will be, though, and we’ll probably have to resort to guessing and speculating again.