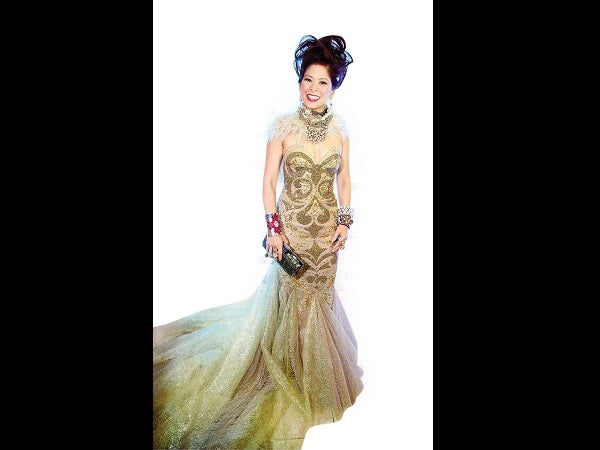 My days and nights have been squeezed by early-morning fitness training and late-night socializing. Keeping a balanced lifestyle is a charmed talent I have mastered, chiefly around the skill of sleeping less.

There are many ways around time management. On a night of multiple events, after snapping a few photos, I know it is time to hie off to the next affair.

The best parties are those that combine sports and fashion into one wonderful event. The Send-Off and Gala Dinner for the Philippines Volcanoes Team, hosted by Fila at the Prince Albert Rotisserie, Hotel Intercontinental, was a perfect example. Nothing can be more delightful than partying with big, strong men in tuxedos!

Our Philippine National Rugby Union Team will be proudly representing the Philippine flag at the 2013 Rugby World Cup Sevens in Moscow, Russia next week.

Prior to the sumptuous dinner, Fila royal couple Butch and Cris Albert presented the official Fila jerseys to the Volcanoes, symbolically cementing the partnership between the brand and the team. The hotel lobby was temporarily turned into a Fila/Volcanoes gallery with giant photos of the winning matches of the Volcanoes and the latest styles of the Fila sports gear.

Rick Santos, president of the Philippine Rugby Football Union, and team captain Michael Letts shared their insights about the team and rugby’s future in the country. Budding rugby player Carlo Albert ably represented the Fila brand during the evening’s festivities.

For the glamorous affair, Prince Albert was transformed into a beautiful garden of roses, peonies and stargazers. Celebrity florist Robert Blancaflor gorgeously arranged the flowers between silver candelabras and crystal vases.

And of course, the best part of the night was the roast Aberdeen Angus prime rib. Red meat for big boys.

As the country’s newest sports heroes, the Volcanoes are all set to battle Kenya, Samoa and Zimbabwe on June 28-29. Fila Philippines is proud to be a sponsor as they carry our flag high.

There seem to be so many new sports with a ton of media mileage. Even triathlon now has its own magazine, MultiSport Philippines. The freezine is distributed in fitness centers and gyms around the country, totally focused on the disciplines of swimming, biking and running.

For June, its cover features my hubby Dennis and I, wearing the latest Speedo suits. Speedo has unveiled new additions to its Health and Well-being Collection, giving female swimmers the fit and support they need in the water, as well as a flattering and stylish look out of the pool.

I’ve always liked the great fit of Speedo suits and the new collection includes the bust support, overall body shaping and tummy control that define its great swimsuits. Speedo really knows how to flatter the female body and still keep us in style and comfort.

Check out the latest Speedo Sculpture collection as well at its various outlets. The brand has three new, one-piece designs called Aquashine, Spashine and the Premiere Sculpt Printed one-piece. All three feature the intelligent garment engineering that Speedo is known for.

Dennis and I got to try all the latest Speedos during the photo shoot for MultiSport. We also got interviewed by the staff, especially about the benefits of the zero-impact sport. Indeed, the best part of swimming is that there are few injuries possible from training in the sport, as long as swimmers properly warm up and don’t over-train.

MultiSport’s June issue also features bike coach Andy Leuterio talking about “easy 100K” weekend bike rides and his favorite, must-try pit stops along the highways. There’s a lot more in there, so pick up a copy by heading out to your gym.

And of course, if one is going to do a lot of sports, then a bit of a reward with good, healthy food is well-deserved. These days, I like to head over to Vask, the Spanish tapas restaurant by Carlo Calma and friends. Vask is at the newly opened Clipp Center in Bonifacio Global City.

Vask also has a Gallery that just opened with artist Francesca Balaguer-Mercado’s photographic series, “Blame It on the Heat.” The collection is  Francesca’s first series here in the Philippines since completing her master in Fine Arts degree at the Academy of Art University in San Francisco. This talented, young artist has already worked with noted photographers Elena Dorfman and David LaChapelle in Los Angeles.

“Blame It on the Heat,” consists of six images that explore female characters and culture in our country. Francesca was inspired by female characters taken from the novel “Dogeaters” by Jessica Hagedorn, as well as narratives from her own colorful imagination. The exhibit will run until Aug. 11.