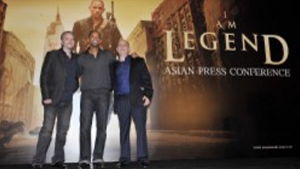 US director Francis Lawrence, US actor Will Smith and US producer Akiva Goldsman pose as they attend a press conference to promote their movie "I Am Legend" at a hotel in Hong Kong, 07 December 2007. AFP FILE PHOTO

‘I Am Legend’ author Richard Matheson dies at 87

LOS ANGELES— Richard Matheson, the prolific sci-fi and fantasy writer whose “I Am Legend” and “The Shrinking Man” were transformed into films, has died. He was 87.

A spokesman for the Academy of Science Fiction, Fantasy and Horror Films said Matheson died Sunday in Los Angeles. No other details were provided.

With a career spanning more than 60 years, Matheson crafted stories that deftly transitioned from the page to both the big and small screens. Several of his works were adapted into films, including 1953’s “Hell House,” 1956’s “The Shrinking Man,” 1958’s “A Stir of Echoes” and 1978’s “What Dreams May Come.”

Matheson was also responsible for writing several episodes of “The Twilight Zone,” as well as editions of “The Alfred Hitchcock Hour,” ”Rod Serling’s Night Gallery,” ”The Martian Chronicles” and “Amazing Stories.” His “Twilight Zone” instalments included “Nightmare at 20,000 Feet,” which featured William Shatner as an airplane passenger who spots a creature on a plane’s wing, as well as “Steel,” which inspired the 2011 film “Real Steel” starring Hugh Jackman.

“I loved Richard Matheson’s writing, and it was a huge honor getting to adapt his story ‘Button, Button’ into a film,” posted “Donnie Darko” and “The Box” director Richard Kelly on Twitter on Monday.

Matheson influenced several generations of storytellers. Among them were Stephen King, who dedicated his 2006 novel “Cell” to Matheson, and Steven Spielberg, whose first feature-length film was the made-for-TV movie “Duel,” based on the Matheson short story of the same name.

He was scheduled to receive the visionary award at the Academy of Science Fiction, Horror and Fantasy Films’ Saturn Awards on Wednesday. The organization said the award will be presented posthumously and the 39th annual ceremony would be dedicated to Matheson.

“We are heartbroken to lose a writer of towering talent, unlimited imagination and unparalleled inspiration,” said Robert Holguin, the academy’s president. “Richard was a genius whose visions helped bring legitimacy and critical acclaim to science fiction and fantasy. He was also a longtime supporter of the academy, and everyone associated with the Saturn Awards feels emptier today to learn of this enormous loss.”

Matheson is survived by his wife and four children.