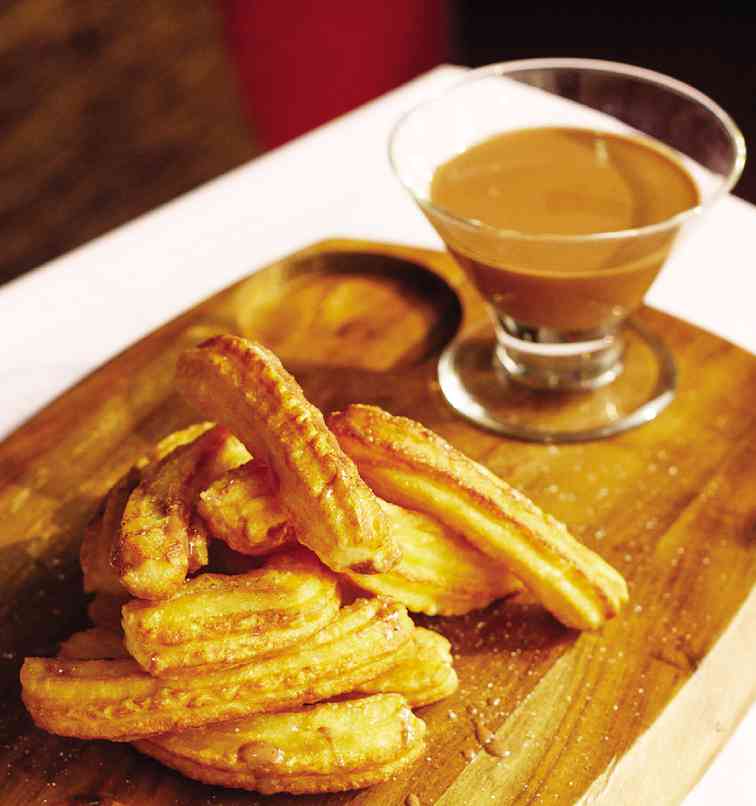 For your merienda, how about some high tea with gambas, Jamon Serrano, churros and tocino del cielo?

The café crowd loves the Churros Con Chocolate, said Joy C. Andrade, RWM public relations supervisor. It’s been such a bestseller that Café Maxims plans to include it on its regular menu. Chef Lopez said he used European chocolate couverture for the rich dip. A little canola oil gives it a smooth consistency and sheen.

Other light snacks are Silvanas in vanilla and biscuit flavors, and the baked Empanada (turnover) with Chorizo and Green Peas and Prawn-Gambas fillings.

High-tea sets are a Café Maxims trademark. Diners usually order the three-layer high-tea set from the regular menu for merienda or meetings. It includes savory pastries and dessert, plus a pot of tea or two cups of coffee.

The high-tea items are bigger than bite-size, but are not as filling as a dinner meal, said Peralta.

For Gastronomia de España, the recipes were adjusted to fit the Filipino taste.

“We tempered the sourness of the sauces, and made them a bit sweeter,” Peralta said. “We used local sardines, but the breading has popular Spanish spices like paprika and chili powder.”

The middle layer has tapas, or traditional Spanish appetizers, served on baguette slices. Toppings include Jamon Serrano, breaded sardines, and a combination of tomato, Parmesan and anchovies.

Completing the sampler is Tuna Brochette—breaded tuna with veggies sautéed in pomodoro sauce, with a slice of grilled lemon.

And, of course, one has to enjoy the last layer of this treat—the desserts. It has palmeras, or butter cookies, and Tocino Del Cielo, a traditional Spanish dessert.

Lopez explained that Tocino del Cielo contains water, egg yolk and sugar. It has no milk, which makes it different from leche flan.

“I put some orange sauce to balance the sweetness,” he said. It is garnished with an orange-sesame chip that provides crunch and a citrus kick.

The savory-and-sweet set is best paired with brewed coffee or tea, although some diners also order white wine, Peralta said.