A living treasure is still up and about with her advocacies | Lifestyle.INQ ❮ ❯ 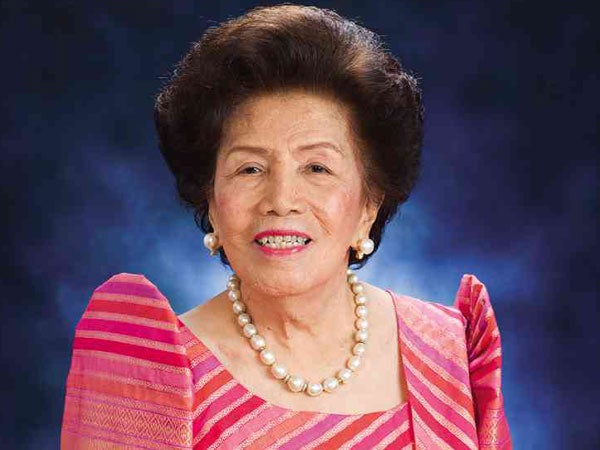 A living treasure is still up and about with her advocacies

Of course not!—was Helena Z. Benitez’s retort when a TV journalist recently asked her whether she ever regretted not having married and started a family.

And it’s not as if not having children were a liability. Benitez counts 12 nephews and nieces, 42 grandchildren, and 29 great-grandchildren as immediate family.

Lyca Benitez Brown, daughter of Benitez’s brother Tomas, says that when they were small, her aunt used to tag them along whenever she went abroad. “She loved to travel. She encouraged us to travel. She took me to Russia, Switzerland, on a European tour. She introduced me to my first artichoke.”

Benitez, who turns 99 today, June 27, still goes “partying,” says Brown. Only last Friday, she came out of hospital to attend a special performance of the Bayanihan dance troupe in her honor as its founder at the Philippine Women’s University (PWU), then returned to the hospital after the event.

She stays in the hospital for rest as advised by her doctor and not for any ailment, says Brown. It’s the usual infirmities of old age; otherwise she’s fit as a fiddle.

Still a lucid speaker, she’s “much better in a one-on-one conversation, and very poised,” says Brown.

To test the sharpness of her mind, ask her to comment on today’s politics and she’d explain: “You cannot compare politicians now with those of the past. Politicians should be suited to their time. They have different sets of problems to confront.”

Benitez, an educator and civic leader first and foremost before venturing into politics, is the daughter of Conrado Benitez and Francisca Tirona. The Benitezes are from Pagsanjan, Laguna; and the Tironas from Imus, Cavite.

Conrado was the founding dean of the University of the Philippines College of Business Administration, and one of the Seven Wise Men who drafted the 1935 Constitution.

In 1919, Francisca, her sisters and some friends founded PWU, the first university for women in Asia founded by Asians.

During the 1958 Brussels World’s Fair, in need of a Philippine representative, she, choreographer Lucrecia Urtula, music expert Lucrecia Kasilag and artistic director José Lardizabal founded the Bayanihan, which was eventually designated as the Philippine National Folk Dance Company.

In 1966, Benitez became the first Filipino chair of the United Nations Commission on the Status of Women.

In 1968, she was elected senator of the 7th Congress of the Philippines, in which she served until 1973. In the wake of the collapse of the six-story Ruby Tower in Manila, she filed the National Building Code, which became law.

In 1975, she was named the first woman and first Asian president of the UN Environment Program governing council.

Benitez became an assemblywoman of the Interim Batasang Pambansa in 1978-1984; and a member of the Philippine Parliament in 1984-86.

Brown says her aunt is a very hard worker and still active. At her age, everything about her health is normal, she has no special diet, and eats anything but in moderation.

“She was trained as a home economist. There’s always fruits on the table, lanzones, peanuts.”

When her doctor remarked she might still live to a hundred, she quipped: “Can we double that number?”

The celebration today starts at 4 p.m. at the Manila Polo Club in Makati. The Thanksgiving Mass will be celebrated by Luis Antonio Cardinal Tagle.

Highlight of the event is the signing of the Benitez Family Covenant by representative family members, to be witnessed by Benitez herself, signifying their commitment to continue her legacy through the Helena Z. Benitez Heritage Foundation and the Benitez-Tirona Mira-Nila Foundation.

The latter is dedicated to preserving and maintaining Mira-Nila, the stately white mansion her parents built in 1929 on a hill in Cubao bordering San Juan, where she still resides.

One of the few remaining well-maintained pre-Commonwealth structures in the metropolis, it houses family memorabilia, books, artworks and antiques. It was declared a Heritage House by the National Historical Commission in 2011.

Part of that family covenant reads: “We promise to uphold her wishes; to work together to preserve, protect and enhance the good name and reputation of the Benitez family; and to continue the family’s commitment to the Philippines and its people.”

Brown says her Tita Helen has been looking forward to this, so you can be sure the birthday girl will be there.