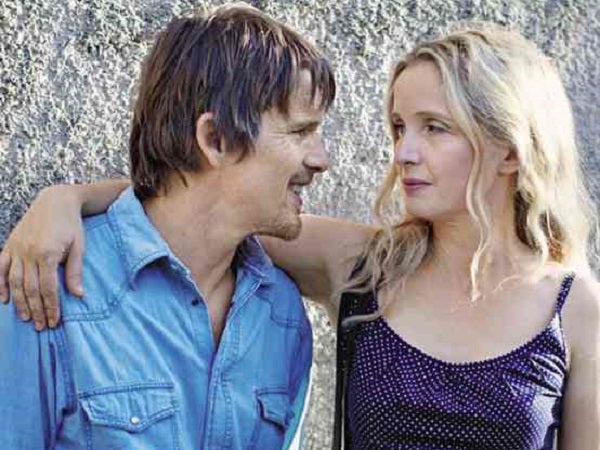 Third installment of Linklater’s series reveals the truth about love

Those who grew up in the ’90s share the fantasy of a “Jesse-Celine” romance. In “Before Sunrise,” two strangers meet on a train and share an intense conversation while walking around a beautiful first-world city. It is a life-changing moment for both of them, so much so that one of them turns it into a book after they part ways. This book is central to the two strangers who’ve never forgotten each other in “Before Sunset,” where Jesse and Celine find each other and live happily ever after, presumably.

When the third movie was announced, fans of the franchise were beside themselves with joy because they get to revisit Jesse and Celine and the deep conversations that made them fall in love with each other.

The third film entitled “Before Midnight” takes place 18 years after that first encounter on a train. Though Ethan Hawke and Julie Delpy are still gorgeous and relatively well-preserved, the passage of time is evident in the characters they portray, both in features and attitude. The couple we’ve adored and aspired to become are now parents to a teenager and twin girls. Their outfits are more casual “parent” chic, their faces lined and bodies a bit droopy. 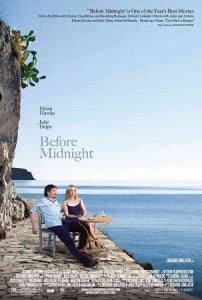 The film follows the formula of the first two. We are still privy to the conversations of an intelligent couple, and the voyeuristic appeal is still there. The movie’s setting is just as gorgeous as the last two, this time the couple mine through their relationship while traversing through a Greek island.

Nine years of togetherness is without its folly. The shine of idealistic love is gone, replaced with a patina of familiarity and weariness. Life as parents and adults have taken its toll on our favorite couple and their conversations are now peppered with their new reality. Still, the conversations are still as engaging, perhaps more so as the two see each other without rose-colored glasses.

We like the juxtaposition Linklater sets at a scene where Jesse and Celine meet a younger couple both similar and different from them. While Jesse and Celine lost touch with each other in “Before Sunrise,” the new couple they converse with have no such problem, what with the advent of Skype, Facebook, Twitter and other forms of technological communication. We wonder if Celine and Jesse would have fared well if they were able to follow each other on Twitter after that moment in Vienna. Would Celine’s rants have turned off Jesse? Would their love have lasted if they were Facebook friends?

Even if you haven’t seen “Before Sunrise” and “Before Sunset,” the third movie stands alone well by itself. It showcases the reality of sharing a life with someone you’ve fallen in love and what happens to love when real life intrudes.

“Before Midnight” is distributed in the Philippines by Reality Multimedia, a boutique distribution company set up by partners Leo Po and Dondon Monteverde. The two and director Erik Matti are avid fans of the film, which is why they chose the film to be their maiden distribution project. The company’s other venture, Reality Entertainment is behind the production of films such as “Tiktik” and “On The Job.”

“Before Midnight” opens in cinemas on July 3.