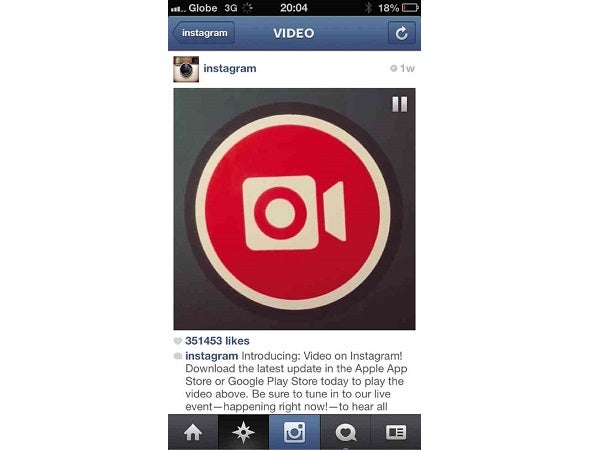 VIDEO for Instagram is a polarizing new feature for users.

The Instagram world was abuzz last week when founder and CEO Kevin Systrom announced the inclusion of video to the photo-sharing social network site.

The new feature enables Instagram users to also upload a 3- to 15-second, square-filtered video. Simple editing tools, such as going back to delete several frames and a single pause/record button are included in the video mode.

Filmmaker and writer John Pavlus writes in a Fast Company article that Instagram’s video stabilization has instantly put a Steadicam in his pocket, and that it “will make you feel like Martin Scorsese.”

Uploading a video takes longer (naturally) than a photo, but the similar square format with no obtrusive playback bar creates the illusion of a moving photograph, almost quite like the moving photos described in “Harry Potter.”

The news was met with equal parts excitement and derision. The folks who felt that stills weren’t enough to fulfill their creative sharing needs were thrilled at finally having more leeway to share what they were seeing/thinking, while the rest who have been treated—if it can be called that—to tons of selfies and duck faces were frightened at the thought of a feed filled with animated selfies and a 360-degree of #ootd’s (outfits of the day). Indeed, it was timely that “Instagram with Video” was launched the same week as “World War Z,” because video selfies (vidsies? selfids?) are just as frightening as a zombie-filled metropolis.

Meanwhile, other users on Vine, a Twitter-powered social network that was trying to fill the video-less Instagram gap, jumped ship to return to Instagram.

Other loyal users of Vine still prefer its 6-second video component, and are waiting for Vine to rebound with better features on its next update.

As with most social networks, the success of a new app relies heavily on their users; with Instagram’s reported 130 million monthly users, 16 billion photos uploaded, and 1-billion “likes” a day, many have already eulogized Vine and its “short-lived” brilliance.

Systrom said in an interview that his group has always wanted to integrate video into Instagram, but he pointed out (rightly) that it’s a medium that is hard to master and consume—that and the fact that video playback and uploading cost bandwidth and server space.

It’s easy to take a photo, and a poorly photographed subject can look good with Instagram’s myriad of filters, but it’s not easy nor quick to compose a video, even a short one at that. From a consumer’s point of view, it is much easier to stomach a crappy photo than it is to sit through an ugly video, even for just 15 seconds.

We’ve seen several pointless videos under the guise of “testing Instagram video”: bacon crackling on a frying pan; or the camera being panned to a still shot of food (take a picture, buddy, it’s faster).

But we’ve also seen cool videos, like artists sharing amazing stop-motion videos of a work-in-progress, or a chef (@chefjayps) sharing a 15-second video of how to cook salted fish fried rice, making it look so ridiculously easy that even a kitchen-phone like myself was intrigued to try it.

The feature is barely a week old and Instagram video has also shown its usefulness for reportage. During the recent Supreme Court ruling against Defense of Marriage Act (Doma) in the United States, many spectators who were on the streets were able to capture on video the reactions of people and upload them instantly. The results were appreciated for its rawness; it also helped give more perspective to news as it unfolded.

I must admit that I have abused my video-sharing abilities by posting shots of my dogs in various activities—snoring, scratching at the bed, rolling over, barking—all within the span of a day. But hey, we also get to exercise our democratic right to unfollow someone whose feed makes us want to gouge our eyes out.

Even if the era of animated selfies is at hand, we can still choose to live selfie-free.