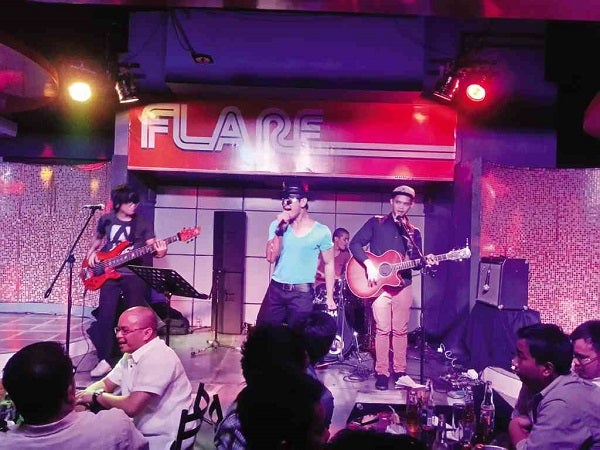 The past week was full of surprises, bringing us to places that featured performers we’ve never watched before.

Fygi’s voice was sultry and her repertoire favored jazz standards, including French, Spanish and Portuguese classics. In the hands of the first-rate, all-Pinoy band, the music surged with a wave-like energy that induced a fun vibe.

A standout number was “Smile,” which Fygi rendered in a refreshing tone devoid of the original arrangement’s bittersweet mood, and which the band elevated further with a bit of avant-garde flavor.

At certain moments we felt like we were in an elegant Las Vegas club being entertained by a classy international act. However, there was distraction beside our table from a woman in the audience, who couldn’t stop yakking with her friend all the way till after the show’s end!

But there was another crazy happenstance, this time onstage involving Fygi, who turned flirty, picked a guy from the crowd and came on to him like a seductress while singing a make-out tune. The audience loved it, especially since the object of Fygi’s advances looked game and Fygi herself was acting like she was enjoying herself.

She actually flirted with all the band members before that number, as if testing her sidemen’s ability to focus on the music. Apparently the musicians couldn’t be bothered; perhaps they thought Fygi was an over-the-top incarnation of a cabaret star.

The next night, we visited Flare—the club formerly named Mugen at Metrowalk in Pasig—to check out a band called Climax, whose frontman exuded an air of mystery because he wore a mask while singing. (He also adopted the band’s stage name.)

The place was full when we arrived past 11 p.m. The crowd was a mix of young gangmates, middle-age professionals, and a few foreigners with Filipino women. We also spotted Patrick de la Rosa surrounded by five girls at a table.

Curiously, the first three songs in the band’s repertoire on its second set were originally sung by women: Pink’s “Just Give Me a Reason”; Alicia Keys’ “Girl on Fire”; and Adele’s “Rolling in the Deep.” Geez, these are difficult songs but Climax aced them with hardly any difficulty.

He likewise interpreted Maroon 5’s “Moves Like Jagger” with aplomb, although there were moments when his energy seemed to be dipping.

Alas, this laxity became too noticeable onstage even if Climax looked full of confidence. By the time he started channeling Francis M in “Kaleidoscope World,” we were losing interest—aggravated by the uncomfortable noise level assaulting our ears.

We were wondering if the culprit was the sound system or the acoustics of the place itself, but we found it really hard to converse with our friend even in between the band’s songs.

At that point we decided to flee from Flare and seek refuge in Aruba nearby. Good thing, Romy Jorolan was playing solo, although he was on the last two numbers of his final set.

Nonetheless we enjoyed every minute of his versions of The Script’s “The Man Who Can’t Be Moved” and the Eagles’ “Hotel California.”

Surely it helped that Aruba had excellent acoustics, because we could hear our friend’s voice as she talked while the DJ played Sting, Culture Club, Hall & Oates, Sade and Kenny Loggins hits after Jorolan had left the stage.

Two nights later we were back in Aruba, on the recommendation that a band called 3rd Avenue was worth a look-see.

But things started perking up when we heard the band’s distinct cover of Apo’s “Panalangin” featuring a spirited sax solo, and a slightly tweaked version of Earth, Wind and Fire’s “Reasons,” with Ledesma’s falsetto zooming to fantastic heights.

At that point we realized that 3rd Avenue knew the finer points of musicianship and could play just about anything that pop fans love. Which was exactly what it did, obliging to almost every request from the full-house crowd: boy band staples including “I Swear,” “Quit Playing Games with My Heart” and “As Long as You Love Me”; VST&Co. (“Ipagpatawad Mo”); even John Legend (“Ordinary People”) and Chaka Khan (“Through the Fire”)—the last one an extremely difficult tune but which Lim sailed through with relative ease.

In between sets, Ledesma told us that the band has plans to record its own songs.

We’ll wait for them.