Young artist refuses to be bound by one medium | Inquirer Lifestyle ❮ ❯ 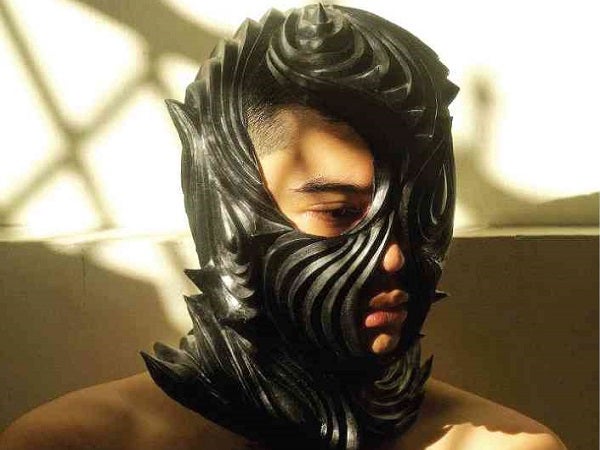 Young artist refuses to be bound by one medium

He may only be 27 years old, but artist Leeroy New already has a sizeable body of work that ranges from the drawings and sculptural pieces he did when he was younger to the public installations and wearable art that reminds one of vegetation or insect carapaces.

His most recent exhibit at the lobby of St. Luke’s Medical Center in Global City consisted of four writhing pieces from his “Monstrosities” collection, an odd choice given the venue.

It’s impossible to pin this young artist down as a painter or a sculptor or a fashion designer because, as he told Inquirer Lifestyle recently, “in art, the medium is irrelevant. Painting or sculpture are not the only representations of art. That’s an outdated way of thinking.”

The outspoken native of General Santos City spent most of his childhood drawing and painting but it was only during his last two years in primary school that he and his family learned about the Philippine High School for the Arts (PHSA). He applied to the prestigious arts school located at the foot of Mt. Makiling in Laguna and was accepted.

“I discovered that it didn’t matter what medium I used. At the PHSA, most of my friends were installation artists or conceptual artists. I realized then that art-making should not be bound by a single medium,” New said.

He admitted, however, that most of the art he was exposed to while he was growing up were those hung on walls.

“In most provinces, they don’t really have access to contemporary art so it was surprising to see at the PHSA how most of my professors dealt in—and encouraged—alternative art-making practices,” he said.

In this fertile environment, New gladly experimented with different media. He painted, sculpted, distressed, deconstructed and reconstructed anything and everything he could get his hands on. This process of incorporating the mundane into his art and transforming it is something he continues to do.

“I experiment with what is immediate to me. I use what I see or what is available to me. That’s usually how artists work. They try to react to what’s available to them,” he said.

To this end, he sources a lot of his materials where he can, such as Divisoria, hardware stores and even dental supply shops.

“I alter these items by melting them and reconfiguring them using molds that I first sculpt out of clay,” New said.

He has fashioned inexpensive plastic connector toys from Divisoria into bolero-like tops while religious figurines are altered and reconstructed using candy-colored resin.

One of his more ghastly pieces is a figure of the Infant Jesus that he paves entirely with clear resin teeth, the ones dentists use to make dentures.

Asked whether he has received his share of awards, New says he has but that they don’t really mean that much to him.

“I don’t believe in awards. We were trained early on not to rely on awards. If there is a cash prize, then good but we use it to further our craft,” he said.

Not a jack of all trades

Despite all the “pots” he has dipped his hands into—conceptual fashion, public sculptures and installations, gallery exhibits, production design in film and TV—New does not see himself as a jack of all trades.

“I don’t just try for the sake of trying. I need to excel in all that I set out to do. It’s all part of my training. We were trained to apply our creative sensibility onto anything,” he said.

Asked how he knows whether he has excelled or not, he said it was mostly personal. “I don’t quantify excellence or failure by the number of awards or the lack thereof. Only you can know or say how well you’ve done something.”

Although he repeatedly says that he does not put a premium on awards, New says he attends the ceremonies “to support the community… because any support contributes to the proliferation of the arts.”

One of his wearable art pieces—an armor-like top made of silicone—looks very similar to the one worn by Gary Oldman in the movie “Bram Stoker’s Dracula.” When I mentioned this to him, he said he has heard that countless times but does not take offense.

“Similarity is not an issue. The authenticity is more the concern. If it’s authentic to you or to your history then superficial similarities don’t matter,” New said.

“I experiment a lot. Eventually, something I’ve done must look like something that’s been done halfway across the world. In art, influence is not an issue. Even Picasso was influenced by African masks,” he added.