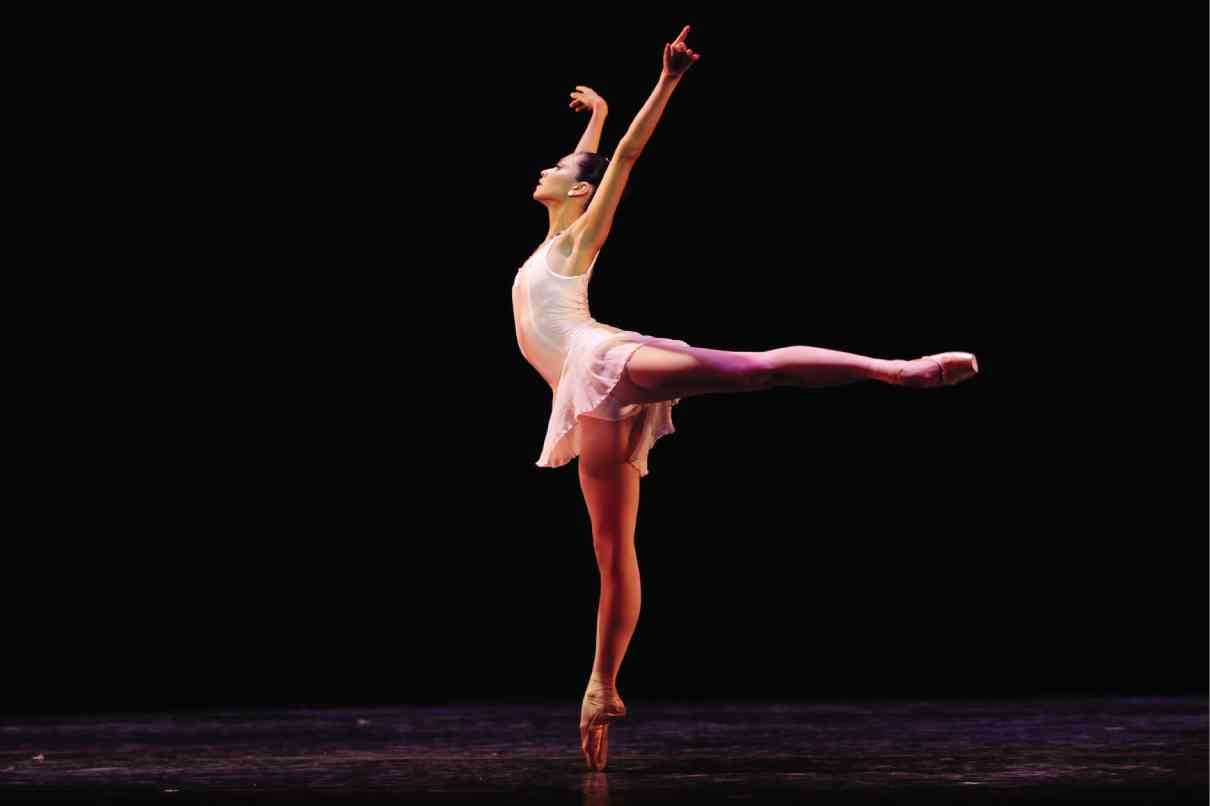 Ballerina Christine Rocas: Celebrated for both physical prowess and lyricism

If ballerina Christine Rocas were a dessert, she’d be like chocolate lava cake, solid on the outside but oozing with molten sensuality from the inside. She makes you savor her every movement onstage; yet even after her performance, her dancing leaves you satisfied.

Filipinos, who have seen her at the recent “Stars of Philippine Ballet,” can’t help but gush at her trademark fluid arms, her technical gifts matched by her expressiveness. She becomes an ideal manifestation of the dance the way the choreographer might have conceived it.

But in an interview with Inquirer, the 28-year-old dancer admits she’s just human.

Rocas started out as a gymnast who worked her way up to the national team. Born with long, steely but sinuous limbs, she got a scholarship from BM. Given an ultimatum by the national team to choose between sport and art, Rocas, then 14, chose ballet.

Although she studied under the tutelage of BM’s top dancers, she acknowledges artistic director and prima ballerina Lisa Macuja as her inspiration. Aside from providing solid technique through the Russian Vaganova training, BM’s contemporary repertoire tested her own limits.

Rocas worked with guest choreographer Agnes Locsin, who created “Arachnida” pas de deux and “Ritwal,” which later became her showcase pieces. She recalls how Locsin made the dancers work out after class with sit-ups and push-ups to strengthen the stomach muscles and upper body.

“She (Locsin) taught us how to become stronger not just in dance but also a person,” says Rocas.

With her stage presence and physical prowess, Rocas was sent to international competitions. The turning point was winning the Arpino Award and the silver medal in the New York International Ballet Competition in 2005.

Between rounds, two individuals had befriended the dancer, commending Rocas for her performance. They also asked why Rocas, who was born in San Diego, California, represented the Philippines and not the United States. Rocas explained that since it felt appropriate that she should represent the Philippines where she was trained extensively.

Still, with a dual citizenship, Rocas easily got a job at the Joffrey Ballet in Chicago, and paid her dues starting as member of the corps de ballet. Her first featured role was one of the Fairies in “Cinderella.”

She then made a breakthrough when she was cast in title role of “Giselle.” It was made more memorable by the fact that she was coached by the late English legend, Frederick Franklin, who was still performing until his 90s. He was known for restaging iconic dances such as “Giselle” and giving them dramatic focus. The dance was profuse with subtleties that could challenge seasoned performers.

“When he demonstrated, his eyes would sparkle. He told me that Giselle wasn’t just about steps, but how you told the story,” says Rocas.

Although it was tempting to channel Lisa Macuja in “Giselle,” Rocas trusted her own acting chops. “I thought of how Ma’m Lisa would do it, but I had to make the role into my own.”

In pas de deus, her performance is enhanced by her trustworthy partner, Mauro Villanueva, who is gifted with coordination and sensitivity. “He does something extra which makes the girl look even better than expected.”

As a friend, Villanueva has also been a comforting influence on her. Thus, their performance becomes a dramatic partnership.

Dancing with Joffrey Ballet for eight years, Rocas has been exposed to a wide variety of styles. She enjoyed being one of the Virgins in the “Rites of Spring,” which is based on scholar Millicent Hodson’s research on Vaslav Nijinksy’s original choreography.

“Other people would not appreciate it because they are used to seeing us looking beautiful and turned out. It’s fun. Here, we are turned in and bear clawed. You may feel silly. But it’s my personality, I like being silly,” says Rocas.

She has worked with Stanton Welch whose “Son of Chamber Symphony,” a ballet with innovative touches, showcased her fluidity and delicacy. In Jiri Kylian’s “Forgotten Land,” a mystical ballet about couples in various psychological stages of relationships, Rocas brandished her soulful abandonment. In William Forsythe’s “In the Middle of Somewhat Elevated,” she was lauded for her lyrical strength.

The only review which sticks on her mind is New York Times’ comment on her “Cinderella:” “Christine Rocas could smile less and find more seriousness in this heroine…” Still NYT critic Alistair Macauly was kind: “ …yet I hung on the charm of her every move in enchantment. She was also (on Saturday evening) a ravishingly sensuous Fairy Summer.”

Although Joffrey Ballet prides itself for its democratic structure, Rocas admits that she isn’t always in the first cast. The principal dancer, Victoria Jaiani, graces the opening nights where the reviewers and patrons attend.

Rocas considers herself lucky to be learning the principal roles and landing in the second or third cast. Even if she doesn’t get noticed by the press, the audience would come up to her after the show to commend her work.

For all her gifts, Rocas admits she gets nervous before going onstage. “Even in rehearsals, nerves will be there. I get nervous in the wings. Once I step on it, my body knows what to do. The nerves melt when I keep dancing,” she says.

Gaffes onstage? “We are light-hearted about it.”

Rocas admits of her insecurities, “I have a bad habit of comparing myself others. I can’t help it. There is also a mirror and there are people in front of you telling you what you are not supposed to do or could have done,” she explains. “But when I go onstage, I try my absolute best to think of what is happening, to be on the present moment. There is self-awareness. It’s a liberating experience. Nothing can hold me back. What is bad is when I start thinking about it.”

She welcomes the challenges of being in a major company. “Joffrey Ballet is not a ranked company. There are no stars. Everyone gets the chance to be in a ballet. The audition can be nerve-wracking. We try to look our best—borrow the leotard that looks more flattering on you, pull out the mascara,” she says. “You’re in class and the choreographer Wayne McGregor is looking at the head shots and starts pointing at dancers. All of a sudden, people will try to be in front even if they’re not usually there.”

Then there are there is the competition of roles. Once, she studied a role when a colleague gave her a stink eye (as in masamang tingin). Rocas knew she had to back off when it was meant for another dancer.

Amid the competition, Rocas manages to catch the choreographer’s eye with her exotic looks and movement quality. Her musicality and lucid phrasing—the manner in which she casts movement in time and space—appear so spontaneous and genuine.

This fall, Rocas looks forward to a program of Russian masters, the Cleveland Blossom Festival and Welch’s staging of “La Bayadere,” the story of a temple dancer and a warrior sworn to love one another. Rocas dreams of portraying Nikiya, the lead role of the temple dancer.

At 17, Rocas first portrayed Nikiya in the second cast of BM. But being an alternate to Macuja, seemed daunting. “Tatiana Udalenkova (the Russian coach) must have been frustrated with me. I was lacking in so many ways. The opportunity to dance the same role as Ma’m Lisa was a big pressure. I had to hold up to a certain standard. Lisa had the maturity and confidence while I was so young then.”

Over coffee, Rocas candidly talked about life in the States. The members of Joffrey Ballet work for 35 weeks. For the rest of the year, she files for unemployment and visits her family in the Philippines. During company tours, she keeps in shape doing stretches in her hotel room. While she is away, her cat, Happy, is under the care of roommate. Her long-distance romance with her Filipino boyfriend has lasted eight years, thanks to Skype, Whatsapp and e-mail.

On her future, Rocas has no plans in her timeline. “There is something weird about me,” she says. “Pressure takes away from the fun. Nerves are easier to shake off on stage. I just want to dance.”