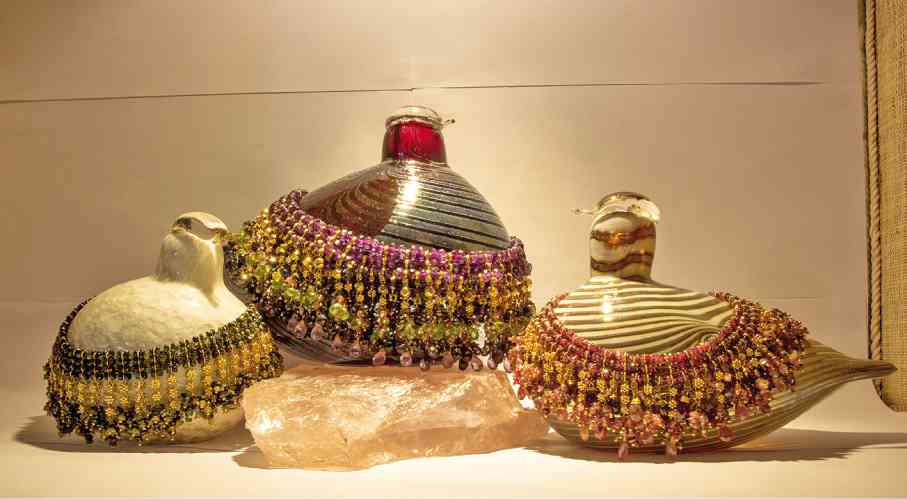 The history of beads may have begun when a woman of imagination impulsively threaded a shell and tied it around her neck. Suddenly she felt beautiful, bewitched by the joy of adornment.

She was not alone. Since the dawn of time, personal enhancement has excited the spirit. From bones and clay to a dazzling array of semiprecious stones, they have evolved to become the language of ornamentation.

Beads have a unique element of mystery. Whether of ancient origin dating to 100,000 BC or a 21st-century creation, they exude the same primitive mystique. Vivid hues, rich and diverse designs meld easily into one another, be they chevrons from Italy, carnelians from Iran, lapis lazuli from Afghanistan, amber from Tibet, eye beads from Mexico, or pearls from Philippine seas.

But it is only when beads are seen through the “jeweler’s eye” that alchemy takes place and magic awakens. That singular “eye” is what creates the art.

Celia Molano is such an artist. Even as a child playing with her grandmother’s beads, she reveled in the beguiling and exuberant combinations she invented. The beads became friends that spoke to her through their language of color, texture, shape, smoothness and varied patterns.

To this day she may still be lost in a wonderland of beads, designing fabulous jewelry until late into the night. This sense of fantasy and delight is evident in her works.

With her husband José Molano, Celia has lived in exotic lands like India and Indonesia, and traveled to intriguing places such as Lebanon, Syria, Brazil and Argentina.

Through the years she has rediscovered herself and explored the infinite possibilities of artistic motifs. Her enchantment has never waned.

As a celebrated center of bead-making, India awakened her curiosity and creativity. She was captivated by the allure of beads made from quartz, onyx, agate, jasper, ruby, sapphire and rock crystal.

She learned that for thousands of years their materials, techniques and elaborate styles had in essence remained the same, and that jewelry traditionally marked every stage in an Indian’s life, whether in the use of necklaces, earrings, belts, bracelets or anklets.

Completely fascinated, she formally studied the craft and saw the intrinsic relationship of beads and culture. She knew then that this would be her life.

On a visit to Manila in 1987, National Artist Arturo Luz met her at a social event and was stunned by the striking beauty of the necklace she was wearing.

“I made it,” Celia Molano said casually. “You’re on,” Luz replied. “You’re exhibiting at my gallery.” He would launch her career.

In Indonesia, where beads were being ignored, Celia Molano went to little shops and marketplaces gathering an extravagance of marble and ivory, amethyst, emerald, opal, garnet, turquoise and silver.

She found beads of majesty and magnificence, of geometric forms and lacquered tints, intricate patterns, animal and human figures, tribal symbols. She strung them together in her inimitable way and unwittingly started a distinctive fashion fever.

In time she held a highly successful exhibit in Jakarta that enthused the social elite as well as local dealers. Beads became the rage. A book published in Indonesia said of her: “It took a foreigner to open our eyes to the value and beauty of our beads.”

Perhaps Celia Molano intuitively resonated with the primal essence of excavated beads because of their long history in the Philippines.

The earliest finds, made of shell, stone and local jade, were from a small cave at Lipuun Point in Palawan, and date to the second millennium BC. Later, exquisitely crafted gold beads were found in Guri Cave, also in Palawan, that date to 500 BC.

Beads were the first art forms. They had their beginnings as symbols of permanence in the afterlife, scattered into graves together with food and tools as links to the eternal.

They were elements in tribal rites of kinship, marriage and hunting, as means of barter to trade land and cattle, and even as bridal dowry.

Like mirrors of civilization, they are laden with superstitions, fascinating myths and tales of relationships.

In Indonesia, textiles richly decorated with seed beads are used for rituals to ward off evil and please good spirits. In Africa, they are status symbols and talismans, and are believed to have magical powers.

And in the entire world, bedi or prayer beads, serve as mystic ties to the Infinite, sacred objects to finger when praying to a benevolent God.

Beyond eras and civilizations and with no distinction of wealth or social status, beads have entranced us all. As early as 3500 BC, patronage by royalty brought beads to the forefront of art and adornment.

In China, jade beads were worn and venerated by Manchurian emperors. In Japan they were used to decorate furniture, sword handles and sheaths, clothing and crowns.

By the 15th century and thereafter, they were essentially designed to enhance a woman’s beauty.

In the enthralling world of adornment, the lustrous pearl is nature’s ultimate gift. An ancient Indian text rhapsodizes: “It is by constantly worshipping a goddess studded with pearls that the moon attains its divine effulgence.”

The earliest example of this jewel is a three-strand necklace dating to 350 BC that was found in a royal Persian winter residence.

In the late 19th century, esteem for the accessory peaked with the wave of elegance and luxurious ostentation in Europe when wearing ropes of pearls was particularly fashionable. The trend invaded the social scene of the United States, and in 1917, a legendary story came to pass.

In his New York store, the jeweler Pierre Cartier displayed a flawless, two-strand saltwater Oriental pearl necklace of unparalleled quality. Priced at $1 million, it was a luminous gem that socialite Maisie Plant, wife of industrialist Morton Freeman Plant, saw while window-shopping and coveted with all her heart.

Devoted husband studied the math and concluded that their six-story neo-Renaissance mansion at 653 Fifth Avenue would be a fair exchange for the precious pearls plus $100 in cash. The deal was sealed.

Alas the necklace’s worth collapsed with the Wall Street Crash and the Great Depression. Following Ms Plant’s death in 1956, it was auctioned at Parke-Bernet Gallery and fetched all of $151,000.

Meanwhile, the Cartier building, known as “the house that a necklace bought,” was worth millions. A landmark structure today, it has since been restored to its original grandeur.

The emergence of cultured pearls and costume jewelry may have shifted the value of primitive design. But they remain the enchanted ornaments that reveal to us the extraordinary breadth of human creativity.