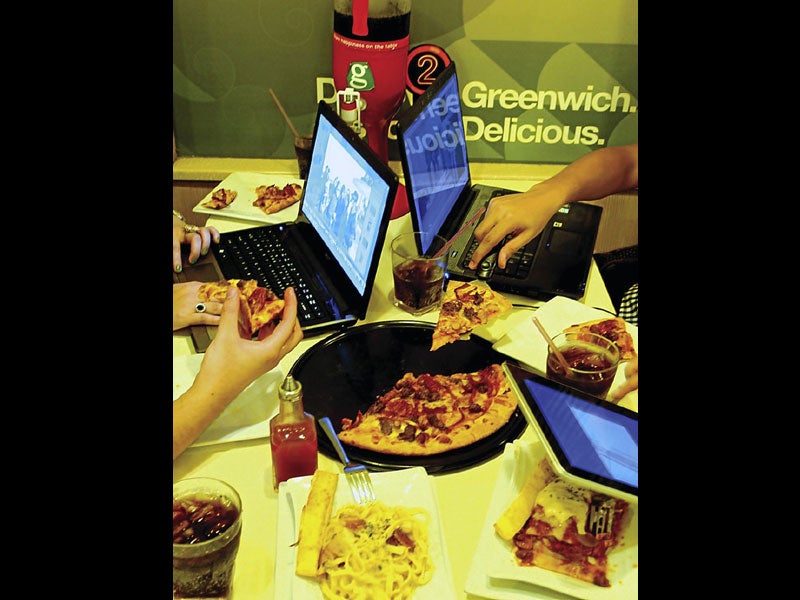 The real reason why I suggested that my friends have regular file-swapping nights is because I’m too lazy to search for files and too impatient to wait for files to download on my own.  And also, for someone who once knew how to code HTML like a pro, I seem to have used up all my IT brain cells learning that (now) ancient coding language, and haven’t yet gotten around to learning how to use torrent sites.

But it’s all good.  My friends hardly get to see each other anymore anyway given separate lives, separate worlds, and separate schedules that wouldn’t intersect on their own unless we made a conscious effort to make them do so.

So file-swapping nights were born.  File-swapping sessions, for those who haven’t yet caught on, are opportunities for you to copy files from your friends’ gadgets: Photos, music, videos, audio books, e-books, silly animated GIF files, etc.  You can do this  without the added layer of food, music, and comfortable furniture, but it’s more fun if you’ve got them.

They don’t happen too often; they don’t happen as regularly as we initially hoped it would (but then again, it’s kind of corny to have too regular a thing going—it would seem oh-so-suburban of us, kind of like cross-stitching Tuesdays for senior ladies), but when they do, they’re a nice opportunity to catch up.

We congregate every so often, lately at a Greenwich branch that’s central to the different places where we work or live.  Greenwich has brought down the prices of its pizza and pasta best-sellers, dubbing it “presyong kaibigan.” What’s not to like? Lower prices, carbs with meat and cheese, meeting up with friends—good times.

The meet ups usually begin with an inside joke: “I haven’t seen you since Facebook!”  Then we smirk and laugh, but sometimes become kind of slightly worried that we spend more time bonding via social networking sites rather than in real life.  Add that to the fact that when we do meet up, it’s to exchange soft files!  “We’re kind of very Star Trek this way, I guess,” a friend pipes in.

We occasionally bemoan long days at work (“Please no more shop talk!” everyone cries), but most of the time, it’s really just a chance to catch up on gossip and dissect everything under the sun, like dissing celebrities (Guilty giggling all around).

But first, of course, the food:  Greenwich pizzas come in 9” diameters or 12” “barkada” diameters with variants such as Classic Hawaiian and Ham & Cheese Pizzas.  Then there is what is called Ultimate Hawaiian and Triple Ham and Cheese Overload for the famished and ravenous.

Once the ordering is out of the way, we bring out our various gadgets: MP3 players, laptops, netbooks, android smartphones, iPhones (or iPod Touch units), or whatever and all sorts of connectors, adaptors and wires.  (Okay, sometimes we bring real books for swapping, too.)

Gadgets are swapped to allow your friends go through your library; in go the flash drives and copying/swapping can commence.  Best to drag the drinks away from the clumsy ones to avoid possible accidents with liquids and electronics.

Then the eating and story sharing can get underway.  Once, the astrologer in the group used the pizza we’d ordered to teach us the basics of astrology: How the slices were like the 12 zodiac signs and the toppings were the planets that can be found in a birth chart.

There’s a Mercury retrograde going on right now, when the planet of communications seems to be going backward in its path in the sky, and therefore, its energies go into backwards chaos.  So, lots of miscommunications in the air and electronics going haywire.

So we ended up not swapping files (to avoid possible sharing of viruses; no one wants to be blamed for destroying another person’s gadget) and just eating and talking.

The circular shape of the pizzas spurred discussions on Google Plus, Google’s new social networking service.  Everyone wants in but can’t seem to wrangle an invite; and when they do get in, no one’s in it yet to make it any fun.

And those who are already in want to know how they can add someone in their “circles” of friends but not have that person’s posts (“shoutouts” in FB) show up in their streams (“walls” in FB).  You know, the kind of friends who you need to add because you’ll never hear the end of it from them if you don’t, but whose dementor-type comments in the virtual world are really kind of … dementorish.

“Meeting people from your past and thinking about the past is very Mercury retrograde,” we nod in agreement.  But really, after the food’s all gone and we separate for the night, we all know we’re going to post photos in our Facebook accounts the moment we get home (or wherever we can get Internet access).