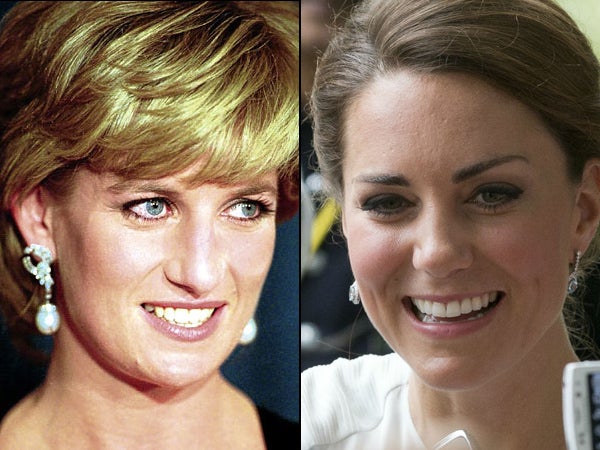 LONDON—As Prince William’s wife Catherine prepares to give birth to a new heir to the throne, she faces renewed comparisons with her late mother-in-law, Princess Diana, whom she never met.

The former Kate Middleton only met her prince four years after Diana’s untimely death, but William gave her his mother’s sapphire ring on their engagement, saying “it was right to put the two together”.

Despite the popularity of the young royals, Catherine, 31, has at times been compared unfavorably to the late princess, who seduced the public with her outspokenness and glamor.

One columnist even called her “Diana lite”.

Diana’s human touch made her a potent symbol; she was described as the “people’s princess” and said she wanted to be “queen of people’s hearts”.

Like her, Catherine, whose title is Duchess of Cambridge, pays informal visits to sick children and backs addiction charities; like Diana, she is a fashion trendsetter whose choices of dress often prompt a rush on stores.

But the duchess has so far opted for a far quieter public persona. When she issued a charity broadcast in April, celebrity magazine OK! — exaggerating just a little — urged readers to “hear Kate Middleton speak for the first time!”

Both women have endured one of the biggest challenges of being a modern royal: constant scrutiny from the press, including feverish speculation about possible pregnancies.

Kate’s circumspection in part reflects lessons the establishment learned from Diana’s life, and her death aged 36 in a high-speed Paris car crash, pursued by photographers.

The family are said to be determined to avoid any repeat of her very public struggles, which included a divorce from William’s father Prince Charles played out in the glare of the media.

But there is one part of Diana’s life the young couple are keen to emulate: her close relationship with her two children, defying royal tradition.

Diana’s former private secretary, Patrick Jephson, told AFP that she “certainly did break the mold in the sense that she took William on tour, she made sure that… she was able to get home in time to put (her children) to bed”.

“They were always with her in her heart wherever she was. And I daresay (with Catherine) it will be the same.”

Catherine will have her baby at St Mary’s hospital in London, where Diana had William in 1982, in what was then a radical choice not to give birth in a royal residence.

The family will live in a 21-room apartment in Diana’s old home, Kensington Palace — which is undergoing a £1 million ($1.5 million, 1.2-million-euro) refit — where Catherine will add to her challenges that of parenting the third-in-line to the throne.

Given Catherine and William’s eight-year courtship, they seem unlikely to face the high-profile discord that plagued Diana’s marriage as her sons William and Harry grew up.

Catherine was 28 when Prince William proposed in 2010, and was a “commoner”, which would have ruled out their marriage a generation earlier.

Diana was just 19 when she became engaged in 1981 to Charles, who was 13 years older and on the hunt for an aristocratic bride deemed suitable by his relatives.

Diana’s parents were a viscount and viscountess who divorced bitterly when she was eight; Catherine’s met working for an airline, started a party accessories business together, and remain happily married.

Diana, besieged by the media, also made use of it: in candid interviews, she put across her side of the divorce and her tough relationship with the royal family, which she called “the firm”.

Catherine looks set to steer a different course, and has joined a “firm” that has lost at least some of its stuffiness.

And despite her reserved exterior, there are glimpses of a sparky character: when a university friend said she was lucky to be going out with Prince William, she is said to have replied: “He’s lucky to have me.”

“We have seen that she holds many of the attributes of a natural royal performer,” Jephson said.

“She is a strong-minded woman. She has her own ideas about how she should serve the title that she now holds, how she prepares herself for being queen — this is after all an apprenticeship for the main job.”