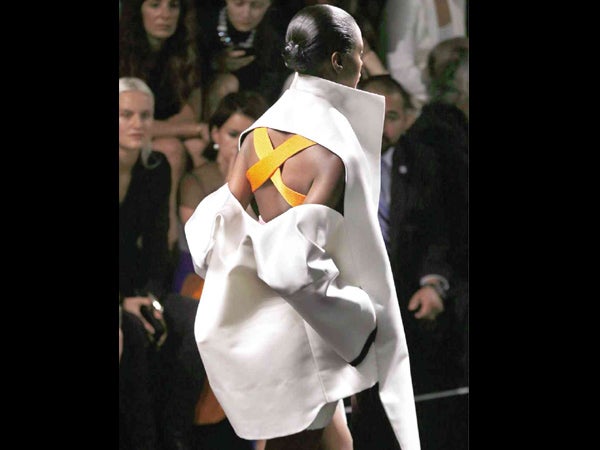 OPEN cutout back of white coat shows extreme balance of design and execution by Dior.

In his seventh collection, his third as haute couturier, Christian Dior designer Raf Simons is charting the direction of the house, long after John Galliano’s controversial exit. Simons is giving clients true empowerment and freedom of choice.

Breaking away from the years of Galliano excess, Dior is rewriting the rules of haute couture by changing the conventional couture mind-set—from outrageous creations meant to shock, to bespoke tailored pieces that are feminine and beautiful but meant to be worn every day.

“My main aim is to bring a sense of reality back to haute couture,” Simons said after the show in a live feed from dior.com. “This collection is about focusing on the reality of the woman herself, including her culture and personality; it is not the reality of just wearing the clothes but how a woman chooses to wear them; the liberation of choice and reflecting who she actually is.”

For the fortunate women who can afford couture, accessibility is about lifestyle-fit rather than budget constraints. Simons did what every good designer should do: He thought of his customer first.

“It can be approached the same way as ready-to-wear: out there for women to enjoy and to wear often,” he said in the same live feed. “It’s a psychology of how clothes can look in relation to a modern woman and the way she is living her life and experiencing the culture.”

To literally and figuratively reach out to Dior’s clients globally, Simons’ made-to-measure outfits drew inspiration from four continents: Asia for modern and fresh architecture (via knits and fabrications); North America for individuality in sportswear; Africa (particularly the Masai tribe) for linear clothing and colors; and Europe for archival looks and codes, mainly from the House of Dior, such as tailored suits from the heyday of its founder Christian Dior in the 1950s.

Simons took the deliberate step of blurring the iconic lines of reference to the house founder by presenting his 53 exits of his four motifs not in distinct groups, but all mixed in and shown in rapid succession.

Simon’s couture offerings for Fall 2013 are neither precious nor stuffy. There were a few red-carpet numbers for such actresses as Jennifer Lawrence. Perhaps because the collection sought to create “reality clothes,” the majority looked like Dior’s ready-to-wear, only pricier for sure.

This is because women today dress as they please, without the dictates of the couturier or other restrictive pressures. Women of the new century define their own freedom.