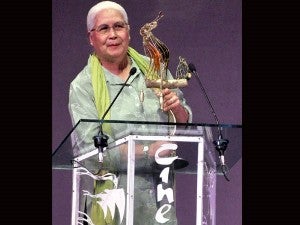 “My sister Ama Quiambao passed away peacefully at 8:09 p.m. on Friday, July 5, 2013. She was surrounded by all members of her family and close relatives. Let us pray for the eternal rest of her soul,” Lui posted in her official Facebook account.

“The wake will be held at Arlington (Memorial Chapels)  in Araneta Avenue. Details will be announced later. Let us all remember Ama with fondness as a colleague, a mentor and a friend,” she added.

Earlier, actor-director Tuxqs Rutaquio announced in his Facebook account, “Tita Ama passed away as ‘Pamamanhikan’ was taking its final curtain. Rest in peace. We will always remember you.”

Quiambao was part of Bernadette Neri’s “Pamamanhikan,” a one-act-play in the ongoing Virgin Labfest 9, a festival of new full-length and one-act plays being staged at the Cultural Center of the Philippines, Pasay City.  Rutaquio is festival dramaturg and director.

Quiambao fainted in the middle of its premiere at 3 p.m. on June 28 or exactly a week ago. She was rushed to San Juan De Dios Hospital in Pasay City and confirmed by doctors to have suffered a heart attack.

When her condition was stabilized, Quiambao was transferred to the ICU of Capitol Medical Center in Quezon City at the request of her family and relatives.

She was in a coma for a week.

Quiambao had been a part of the Virgin Labfest and several productions of Tanghalang Pilipino for several years.

On television, she’s known for her grandmother roles.