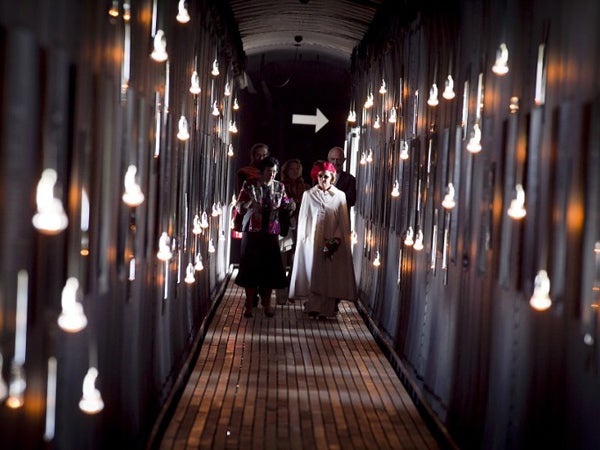 The witches at the ‘Gates of Hell’: Norway’s darkest hour

VARDOE—Four centuries ago in the remote Norwegian Arctic, a region known as the “Gates of Hell” for its harsh climes, dozens of women were prosecuted for witchcraft and killed.

Centuries afterwards, a sense of collective guilt lingers, and the women wrongfully convicted of non-existent crimes are remembered at a memorial in the small town of Vardoe, perched on the edge of the Varanger peninsula in Norway’s extreme northeast.

One woman commemorated at the memorial — a 125-meter-long (410-foot) elevated structure built on stilts — was burned at the stake for allegedly having cast a fatal spell on a child and two goats.

Another was executed after being accused of triggering a storm that caused 10 vessels to sink and 40 sailors to drown.

Poised gingerly on the edge of the Barents Sea, the monument, inaugurated in 2011, looks like a wooden bridge to nowhere, as if to symbolize the pointlessness of the women’s deaths.

At the site is one of the last works from late Franco-American artist Louise Bourgeois — four eternal flames that blaze in a spartan hall, a fitting piece to mark a tragic period in history.

In the early 17th century, a mere 3,000 people lived in Finnmark, the northernmost county of Norway.

From its modest population, 135 people were accused of witchcraft over just a few decades. Ninety-one, the vast majority of them women, were burned to death, if they had not already succumbed to torture.

Even half a dozen girls were prosecuted, but were luckier than most other defendants and all acquitted.

“This heavy toll puts Finnmark top of Europe,” which was at the height of a frenzied witch hunt, said Liv Helene Willumsen, professor of history at the University of Tromsoe, also in northern Norway. “Proportionally it was worse (there) even than in certain parts of Germany or Scotland”.

But why this persecutory zeal in a region so remote?

It is perhaps precisely the region’s geographical isolation that enabled the population, weeks of travel from the seat of power — which was in Copenhagen as Norway and Denmark formed a union at the time — to fall prey to superstitious ideas.

Egged on by a clerical and administrative elite steeped in the dogmas of demonology, the idea that women could make pacts with the Devil caught on, reinforced by the belief that the Arctic was a sort of antechamber of hell.

“People truly thought that there was a secret army around them which was allied to the Devil,” said Willumsen.

“Local courts were not controlled. You could be brought to court, made to confess and sentenced the same day.”

If torture was not successful in extracting the necessary confession, the court could order the “water ordeal” for a woman accused of witchcraft.

This meant she was thrown into the sea, hands and feet tied. If she sank, she was innocent. If she floated, it was considered proof that she was indeed a witch.

“Water was considered a pure element which could repel the impure,” said Willumsen.

In Finnmark, all suspects floated.

One woman, Ingeborg Krog, took the test in 1663 after asking to be subjected to the water ordeal, apparently convinced that it would clear her of the charges.

She floated “like a cork”, explains a plaque dedicated to her at the memorial.

Despite the agonizing torture that then followed, the only confession her tormentors were able to extract was that she had fallen ill after eating a fish given to her by a relative of one of her accusers. Ingeborg eventually died under torture.

“Witch hunts are an unfinished chapter of history,” said Rune Blix Hagen, another historian of the University of Tromsoe.

“It continues at full tilt, not in the West, but especially in Africa and also in Asia and South America.”

Today, just like centuries ago, the alleged witches are usually scapegoats accused of causing illness, death, a shipwreck, a failed harvest, or any other misfortune.

About 50,000 people are believed to have paid with their lives in Europe during the medieval witch trials.

But by comparison, the number of people killed for the same reason worldwide since World War II is estimated at between 70,000 and 80,000.

“These are official figures and probably only the tip of the iceberg,” says Hagen. “The monument in Vardoe is also a reminder that the persecution is not over.”