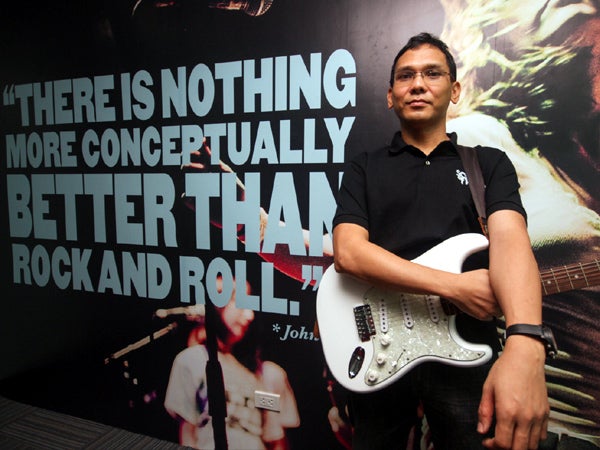 READY TO ROLL: Caruncho (top) with his Stratocarter; the faculty (above) strut their stuff. (PDI Photo/Alanah Torralba)

Rock can be learned, but it cannot be taught.

At least, that’s how the old adage went.

Back in the day, in the dark ages before mobile phones and the worldwide web, if you wanted to play rock and roll, you bought yourself a guitar and a copy of Jingle magazine, and spent countless hours locked in your room learning the opening riff of Deep Purple’s “Smoke on the Water” from the classic 1972 “Machine Head” album.

Then, when you got good enough to play the guitar solo, you got together with a bunch of like-minded buds for a good old Lumanog jam session.

If you were lucky, there was a neighborhood garage band, or the neighborhood guitar hero-just a guy who could play Ritchie Blackmore’s solo on “Lazy” note-for-note on a battered acoustic-and you watched how their fingers moved on the frets.

Depending on how quickly you progressed, you might even move on to “Highway Star” and “Space Truckin.’”

Today, of course, that lengthy and time-consuming process has been considerably shortened.

Countless instructional videos on YouTube, downloadable guitar tablatures-every note and chord of every rock song ever recorded has been mapped out and charted and analyzed so that even a monkey can learn how to play “Smoke on the Water.”

And still, they can’t teach you to rock.

To paraphrase Lance Armstrong, it’s not about the gee-tar.

The essence of rock lies not in the notes and chords, but in the subtle interplay of guitar-bass-drums, the propulsive engine that drives the song relentlessly, builds it to a peak, generates the energy and releases it in that explosion of feeling that we call “rock and roll.”

That is what can be learned but not taught.

At least, not until now.

The School of Rock has just opened its doors in Greenhills.  Its motto: “Inspiring kids to rock on stage and in life.”

In answer to your question, no, it’s not based on the 2003 Jack Black movie.  There really is a School of Rock in the US, a thriving franchise since the 1990s, with several branches nationwide, and the inspiration for the Paramount film.  The Greenhills school (schoolofrock.ph) is the company’s first franchise in Asia.

Like many similar ventures, the school was born out of teenage rock and roll dreams.

Not too long ago, Nino Caruncho IV (full disclosure: this writer’s nephew), Parkin Chiu and Benjamin Go Jr. were high school classmates in Xavier.  They also had a band, and spent countless after-school hours rehearsing, until they got good enough to win a couple of “battle of the bands” competitions.

Eventually, however, the bandmates moved on to business school and MBAs, and to separate thriving business ventures of their own.  But the young entrepreneurs never forgot their rock and roll dreams.

“As we got older, we realized that our love and passion for music was still there,” says Caruncho, School of Rock’s general manager and one of this year’s MVP Bossing awardees.

“We’ve always wanted to start a business that had something to do with music,” he adds.

“At first we thought of opening a bar, where we would be the house band.  (Just like) RJ.  Nah, that won’t work.  Then, while reading a business magazine, I came across a feature on the ’School of Rock.’”

Long story short, the trio contacted the US company about starting a franchise, worked out the numbers, got the green light, flew to Chicago for several months’ training on how to run a School of Rock, and last May opened the first School of Rock in Asia at the Greenhills Shopping Center.

The School of Rock is unlike any other music school, says Caruncho.

“The way traditional music schools work is, you enroll, you go to the school for a lesson, and then you go home.  That’s it.  I went to several music schools when I was younger, but I never stuck with it because I got bored.  I wanted to play rock, but I was forced to learn things like ‘Malagueña.’”

In contrast, he says, the School of Rock’s teaching method is performance-based.

“If you teach a kid theory, he easily gets bored.  But if you teach him how to play, he will eventually become interested in the theory because he enjoys playing, and wants to get better.”

The School of Rock alternates one-on-one lessons with a teacher, with jam sessions with the other pupils.

“They play the songs they want to play, whether it’s AC/DC or Guns ’n’ Roses—walang  ‘Malagueña’ muna,” says Caruncho.

At the end of the three to four month season, the students hold an actual rock concert at a real performance venue, just like the kids in the Jack Black movie.

“They take care of everything, from promotions to selling tickets, not just the actual playing,” he adds.  “It’s a whole experience.”

In the end, the kids learn not just how to play their instruments, but also real-life skills such as confidence, teamwork, even leadership.

The typical ages of the students range from 7 to 18.

“Most of the kids who come in start out shy, but after a few lessons, they get the rock attitude and start doing stances and stage moves,” he observes.

Rather than get professional music teachers to staff the faculty, Caruncho says they elected to hire professional working musicians, some from well-known bands, to teach.

“All our teachers are gigging musicians, not just for the cool factor, but because they have credibility and real-world experience,” he says.

So far, the Greenhills school offers two courses: Rock 101 for beginning students, and Performance for intermediate students.  Apart from the rehearsal studios, the school also has a recording studio and student lounges.

“We want to build a community where the students can hang out and talk about music,” says Caruncho.  “It helps to build friendships and confidence.  And it’s exciting to see the students jamming.” •