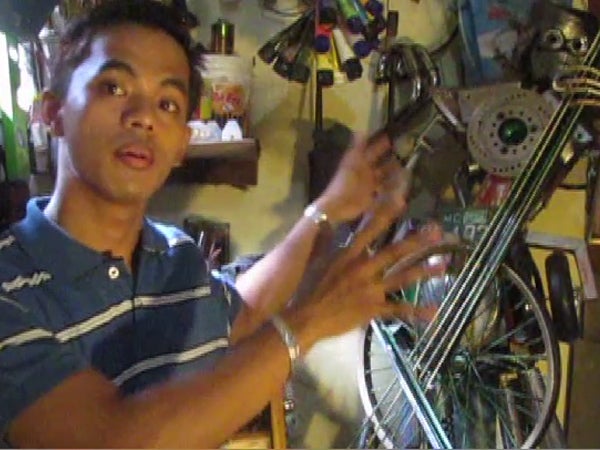 There’s no such thing as bad or good subject, only bad and good artist, so the saying goes.  Promising artist Lucky Salayog is living proof to that as he recreates metal scraps and other junk materials into sculptures and sensible “found art.” Video by Matikas Santos/INQUIRER.net

MANILA, Philippines – One young Filipino artist has found treasure in the junk that people throw away and, using his creativity and resourcefulness, turns it into metal masterpieces that could be his road out of poverty.

Lucky Salayog, a 26-year-old junk art sculptor who was born in Ilagan, Isabela, creates metal sculptures from a small workshop inside his rented apartment in Caloocan City.

During an exclusive interview with INQUIRER.net, he put together a rusty coil of wire, an old motorcycle disc brake, a whisk and several assorted metal pieces to create a sculpture of a dragonfly perched on a flower. All in just under an hour.

While many people go to junk shops to throw away their old or broken appliances and equipment, Salayog goes there to buy scrap metal by the kilo to be used as materials for his sculptures; a testament to the old adage “one man’s trash is another man’s treasure.”

Any piece of discarded scrap such as springs, chains, motorcycle or bicycle wheels, doorknobs, cabinet hinges, motors, broken computer printers, flat irons, etc., is a potential art masterpiece in the eyes of Salayog.

Salayog, the second of three siblings, was born prematurely at six months and three weeks and just weighed two pounds. Doctors had thought he would not survive infancy, but, luckily, he did. And that was why he was named “Lucky.”

His childhood, however, was not as lucky.

When he was three years old, his father, then a furniture-shop owner, separated from his mother, who was then working as a domestic helper. Salayog’s father then had provided some financial support, though only very little since he had a different family at the time.

“When I was in high school, my father seldom sent financial support. So I worked odd jobs repairing shoes, as a delivery truck assistant during the weekends, and as a helper in the furniture shop in Isabela,” Salayog shared in an exclusive interview with INQUIRER.net.

“Usually my customers were my schoolmates so I will have some allowance. My mother was a domestic helper at the time and seldom came home so it was just me and my siblings at home,” he said.

By the time Salayog reached college, he had already developed a passion for the arts. He initially wanted to take up Fine Arts, but due to financial constraints, chose to take up Architecture in Isabela State University instead.

He learned how to make scale models and building plans during college as part of his course but he also continued to pursue his passion for the fine arts by making paintings.

It was not until later that he learned how to make metal sculptures when he had observed a mechanic doing some welding in a neighboring auto repair shop. Salayog had first tried making small sculptures of insects using plastics and glass as materials before he started using metal.

Since that time when he first learned welding two years ago, he has since made 20 pieces of junk sculptures, around 15 of which have been presented at exhibits and sold.

Salayog has since moved on to bigger sculptures; among them a series he calls “Modernong Musikero” which are four-feet tall “robots” that are playing classical instruments such as a violin, cello, and the flute, among others.

The welding of the big sculptures however needs to be done outside of his residence since the sparks can easily become a fire hazard. His neighbors have gotten to know him as the “Robot-Maker” because it was such a spectacle to watch him while making his metal sculptures.

“They would stop whatever they were doing and watch me while I am welding,” Salayog said. “Sometimes they ask me when I will do my next sculpture. I became known as the one who makes robots.”

Salayog, who works with an intensity of focus that rivals a surgeon’s, said that creating his metal sculptures was a continuous process of improvisation.

“I start a piece with a simple draft drawing of how it will look like. What is its position, form, etc., but I never know what the final outcome of a certain piece will be,” Salayog said.

“I start off with the skeleton, then I add a piece, and from there on I would look for more pieces that would complement the first and so on until the sculpture finally takes shape,” he said. “I improvise all the time.”

He also likes to work with a certain measured haste, as if he was chasing a deadline to submit whatever sculpture he was working on.

“I’m in a hurry because I don’t want to let an idea in my mind to slip away before I can make it materialize,” he said.

Salayog recalled that one time he woke up from his sleep and quickly grabbed a paintbrush and canvas just so he could paint something he dreamt of.

Aside from being a fan of classical music, Salayog said he also drew inspiration for his “Modernong Musikero” series from action movies that involve high-tech robots or suits made of iron.

One robot sculpture of his weighed as much as 70 kilograms by the time it was completed. The metal junk he needed for it was sourced from three junkshops.

If kids find toy shops absolutely enticing, a junk artist like Salayog finds junk shops to be a piece of heaven on earth.

He said that when he finds one piece of scrap metal, he immediately gets an idea how it can be used for a sculpture. One example he showed was two large piston rings from an old engine. Both were cut at one part but he welded them together and said he was planning it for a “kalesa” sculpture.

In other times, Salayog said he gets certain pieces of scrap metal even though he has no idea yet how to use it. He just gets the feeling that it can be useful in the future. He even asks to reserve other pieces of scrap in the junk yards just so nobody else will get it.

Some of the tools that he uses were actually obtained from junk shops such as several pliers and hammers.

He said that he enjoys creating junk sculptures because he makes new discoveries through it while inspiring people. It also greatly helps the environment because he recycles the materials that would otherwise have become scrap metal.

“Whenever I still have some scrap left, I use it all to make another sculpture. The leftovers that cannot be used are sold back to the junk shop,” he said.

Salayog recalled one story where his friend, a furniture maker that uses abaca rope, had so much discarded abaca materials that he took them home, made an art painting using it, and later showed it to his friend.

Salayog said his friend remarked: “It’s beautiful” to which he replied: “that’s your trash.” Salayog’s friend bought the painting for P5,000.

Salayog said that he now considers himself as a full-time artist since he has already invested heavily in the tools for making metal sculptures. He used to make house plans a primary source of income.

“It’s no longer a side-line. Drawing up house plans has now become my sideline,” he said.

One of his sculptures in the “Modernong Musikero” series had managed to sell for P30,000. Salayog recalled being told that it could have sold for three times that amount. He said he got excited in making a sale that he accepted that price immediately.

The income from his sculptures however was not yet too big. “Just enough for the day to day expenses,” Salayog said.

“When I make a really big sale that’s when I can give some money to my mother as well as for the tuition of my younger sister who is still in college,” he said.

Salayog reflected that he was the only one among all his relatives who had a passion for the arts. His older brother is an office worker, he said. Because of this and his survival when he was an infant, Salayog believes his life and his talent in art are gifts from God.