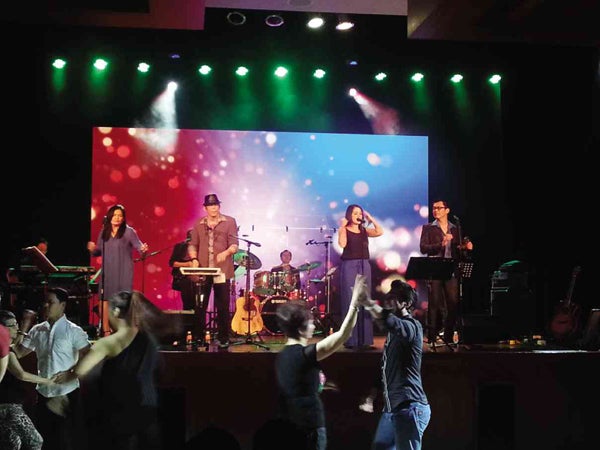 Save the last dance

It’s a Saturday night and the gambling crowd at Solaire Resort & Casino (1 Solaire Boulevard, Entertainment City, Metro Manila) are busy trying out their luck. We stifle a laugh as a woman shouts at her companions, “Walang pupunta ng ATM!” We keep walking until we reach Eclipse—the hotel’s club that features live band music nightly.

Resembling a big ballroom with a spacious performing stage, Eclipse nonetheless exudes a homey atmosphere with sofas, lounge seats and mood lights that beckon us to sit back and check out what makes this place tick.

Turns out that the crowd here loves to dance—not the wild, total-abandon type favored by kids at electronica gigs, but rather the elegant styles of past decades. It looks almost like a typical ballroom-dancing scene with matrons and their dance instructors, except that there are also a few young couples shaking their hips on the dance floor.

The band onstage, Highway 54, knows how to keep the action going with a repertoire that includes random flashbacks from the ’70s, ’60s, ‘50s, with a dash of contemporary: “Do the Hustle,” “Quando, Quando, Quando,” “Save the Last Dance For Me,” “Smooth,” “Trickle, Trickle,” “Staying Alive,” “Night Fever,” “On the Radio,” “Get Ready,” “The Way You Look Tonight,” “Let’s Twist Again,” “Footloose.”

The music sounds seamless, almost like a record; it seems that the band—composed of vocalists Queenie Agustin, Jaramie Zuñiga and JR Dimen, bassist Bong Gonzales, guitarist Danny Reyes, drummer Toto Casacop and keyboardist Ferdie Reyes—has perfected its material for this kind of gig.

We are tempted to say that the band members are probably under strict orders from management not to experiment and just stick to the songs’ original versions—but there’s something fresh about the way the Bee Gees and Donna Summer tunes are played.

We’re not sure if the crowd takes note of that, but it’s quite obvious that the women are having the time of their lives. Our friend points to a matron in an orange dress doing the Swing and LA Walk like it’s 1978. The woman is brimming with energy, like she has just jumped over the fence of her parents’ house to go to a disco for the first time.

When the band takes a breather, Eclipse’s resident spinner, DJ Joker (a talent of apl.de.ap’s Jeepney Music label), plays Hot Chocolate (“You Sexy Thing”), Al Green (“I’m So in Love with You”) and Marvin Gaye (“Let’s Get It On”); DJ Joker’s old-school choice takes us completely by surprise, goading us to stand up and look for anyone interested to dance “maski-paps.” (Call tel. 8888888 for gig schedules.)

On a Monday night we find a full-house crowd in [email protected] (175 Kamias Road, Quezon City) waiting for its resident performers, the AMP Big Band, to take the stage.

Poncy Quirino of “Penthouse 7” fame is here with his family. We also spot Junji Quimbo, chief legal counsel of Manila North Tollways Corporation, with his wife. Serafin Pua (of the late and lamented jazz club Birds of the Same Feather), eye doctor Noel Jusay Lacsamana, and music promoter Jacqui Inductivo are seated at one table.

It’s been some time since we last visited this club, and it’s worth mentioning that it has excellent acoustics which allows people to converse in low voices, even as the 19-piece band is playing with its horn section at full-blast.

The music sounds so vibrant that the crowd keeps shouting its approval after every number. The songs, mostly blues and jazz standards, are familiar because we’ve heard the band play them before, but what makes this night truly memorable is the AMP’s surprising take on Steely Dan’s “Aja.” It’s an abbreviated version of that jazz-rock classic, but hats off to band leader Mel Villena for taking pains to include it on their setlist. We don’t know of anyone else who has the guts to cover Steely Dan these days.

Skarlet joins the band to sing “God Bless the Child,” but it seems she has a tendency to go overboard in her vocal improvisation, to the point that it sounds more like edgy R&B than classic jazz. (Then again, she must be just overexcited.)

Another singer, Aia de Leon (formerly of Imago), jams on “Route 66” and leaves a good impression. Skarlet says she’s been trying to convince Aia to expand her rock roots and try singing jazz and blues, and now the time has come to hear it. Well, perhaps Aia should consider getting into it on a deeper level for her to appreciate the music’s essence.

The band takes a slight detour with “Play That Funky Music” with Joey de Guzman soloing on sax. The crowd loves it, and goes bonkers when “Got to Get You Into My Life” follows. Villena gets confused and introduces it as a song by Earth, Wind and Fire.

We can’t blame him, since that version takes the Beatles original to real funky heights.